WHY DOES THIS GIRL ALWAYS COMPETE WITH ME?? 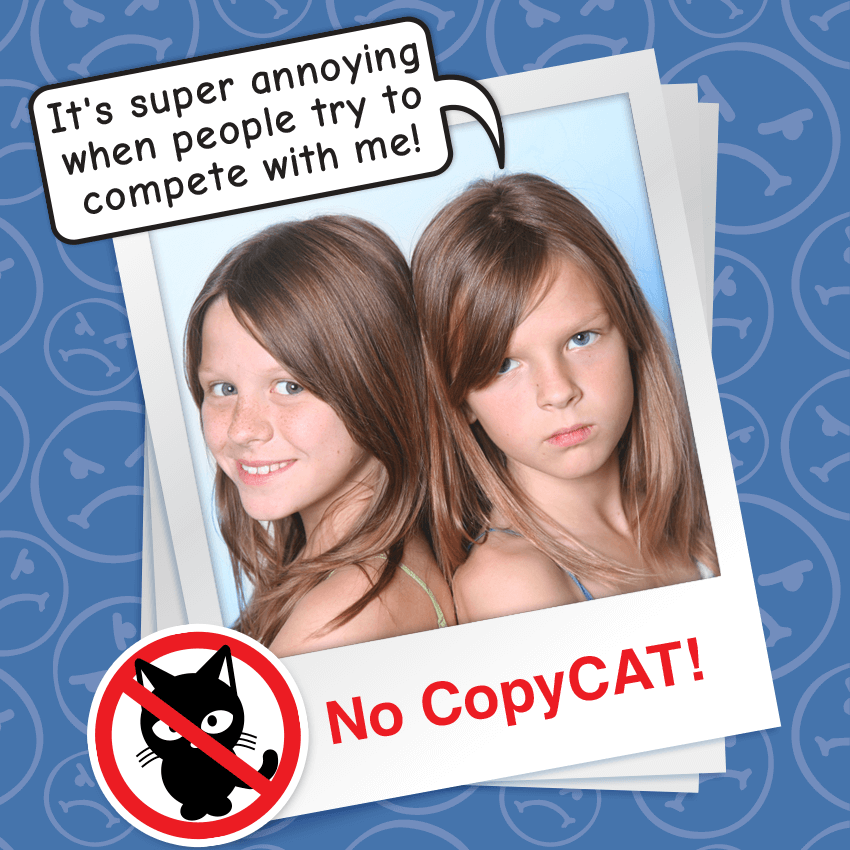 There’s this girl who ALWAYS tries to compete with me in everything I do. She tries to have the best handwriting, tries to be the best in physical education, and tries to be the most popular at lunch. In every project, she’s constantly spying on me, and sometimes I’m afraid that she might start stealing my ideas! I seriously need some advice on how to deal with her. Can you please help me?

It makes me think of this thing my grandma says: “Imitation is the sincerest form of flattery.” It means that when someone copies you, it’s because they admire what you’ve done and want to do something similar. I think it’s the same with competing. If she’s targeting you, it must be because she thinks you’re the best and she wants to prove she’s as good (or better) at whatever you do.

But I TOTALLY get that, while it might be a kind of a compliment, it’s also SUPER annoying.

From part of what you said, though, I wonder if she’s competing with YOU or if she’s just really obsessed with being the best. Like, trying to have the best handwriting, or be the best in PE, or be the most popular at lunch don’t sound like direct competitions with you, personally. They just sound like she’s a high-achieving kind of person. And maybe kind of insecure? That can still be annoying, but it’s not targeted at YOU.

If it’s just how she is, there’s really nothing you can do about that. I mean, this is generally good advice for most situations: you can’t change how she’s acting. You can only change how you react to it.

If you have confidence in yourself, and you’re comfortable with the fact that you’re good at some things and not so good at others, then it shouldn’t really make much difference to you how she ties herself up in knots trying to be the best.

Now, maybe she IS targeting you for competition. If so, I’m guessing there’s some sort of reason for it. Not that you’re to BLAME. It could be anything. You beat her in the third-grade spelling bee and she’s been out to prove herself ever since. Or her crush had a crush on you. Or whatever. You might not ever find out the reason.

As for spying on you in projects and stealing your ideas, that’s the worst. It definitely falls under the category of my grandma’s saying. She wouldn’t be trying to steal your ideas if she didn’t think your ideas were good. So, it’s a compliment. But YOU want credit for your ideas. I get that. And this is a tricky one because sometimes the answer might be to involve your teacher, but you don’t want to tattle.

Think about it this way. Even if she DOES steal your ideas, they were YOUR ideas. Which means you will do a much better job on the project, even if she tries to do the same thing. Teachers notice when it happens. And they’ll see how unique your own approach is. So it might be difficult, but it might help if you think, “Sure, steal my ideas! Bring it on! May the best person win!” Have confidence in the awesomeness of your ideas, and your unique ability to use them.

I think you basically have two options. You can work on not letting her behavior bother you. Try to ignore the stuff that’s annoying you now. OR you could try to befriend her. If she’s targeting you to compete with, it’s because she actually admires you in a twisted kind of way. And if you become friends, you can just combine your awesomeness!

How do you handle someone who’s always competing with you? What about someone who steals your ideas?