WHEN YOU’RE NOT YOUR PARENTS’ FAVORITE 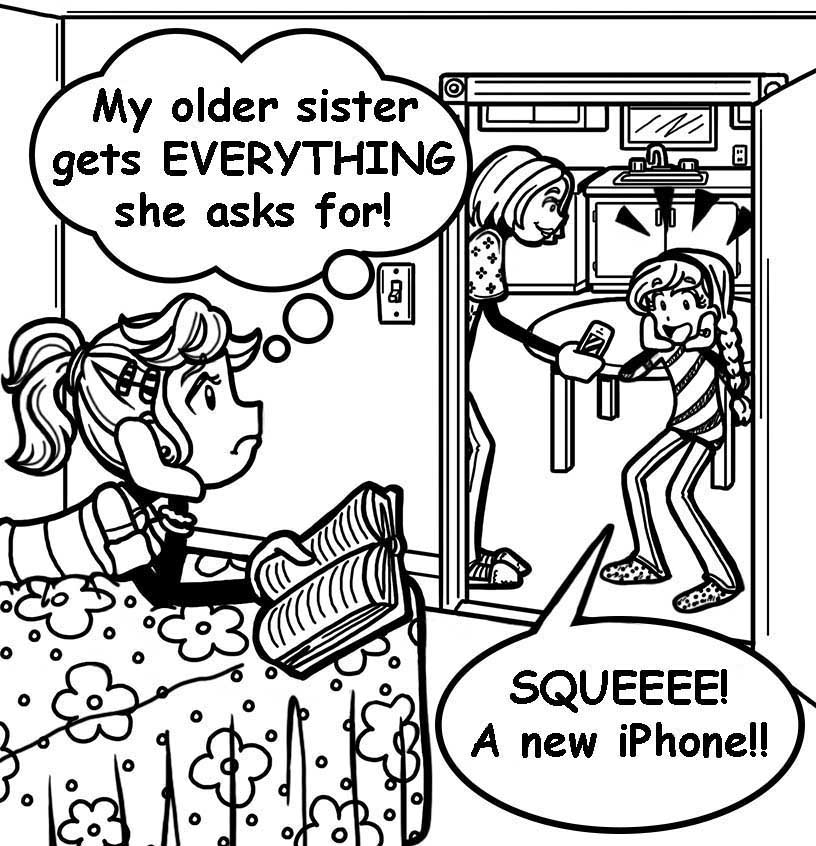 My mom and I normally get along great, but recently she’s been acting like she loves my big sister more. She gives my sister anything when she asks for it, but if I ever ask for something, it’s “no” straight away.

I’m starting to think my mom is getting bored of me or has stopped loving me. What should I do?

Awwww! I really wish I was there to give you a HUGE hug…and not one of those awkward side hugs you give your gross great aunt who smells like she bathes in cat pee and then moisturizes with mayonnaise.

I mean a no-joke, hear-each-other’s-heartbeat, let-you-know-you’re-awesome hug, because I feel SUPER bad that you have to worry about this!

I bet if your mom knew how you feel, she’d have this EXACT same reaction.

I mean, it sounds like she really cares about you, or else you wouldn’t have gotten along great before.

I remember this one time, I thought my mom loved Brianna more because it seemed like she was letting her get away with EVERYTHING and then coming down hard on me for all kinds of totally lame things.

Like, Brianna would clog the toilet with goldfish crackers, Swedish fish, and even frozen fish sticks because “They wanted to go back to the ocean, like Nemo!” and my mom would laugh and say, “You’re so thoughtful! Let’s go get a sundae!”

But I’d play my music a little too loud at night, and my mom would be all, “You really should know better. Until you learn to be more responsible with your music, you can forget about upgrading your iPod.”

It seemed totally unfair! But then I found out some nasty little brat was calling Brianna names in school. (They were totally dumb, not even slightly creative names, like “doodoo head,” “booger face,” and “barf breath,” but little kids are SUPER sensitive!)

It turned out my mom was being extra nice to her because she was trying to cheer her up.

So really, it only SEEMED like she loved Brianna more.

Maybe it’s the same with your sister. She could be going through something super tough, and your mom wishes she could help but can’t. So instead, she’s saying “yes” to everything.

Or maybe your mom made some kind of huge mistake with your sister, and since she feels bad, she’s saying “yes” a lot to try to make up for it.

Or maybe it’s just that your sister’s asking for things she’s allowed to have, because she’s older, and because you’re younger, your mom isn’t sure if it’s a good idea to give you the things you’re asking for.

My point is, there are TONS of really great explanations that have nothing to do with your sister taking up 100% of your mom’s heart.

I’m sure she couldn’t even if she tried, because there’s a big old reserved sign on the other side, and only YOU are allowed in that spot!

If you can’t shake the feeling that your mom’s just not feeling you, I say you tell her what’s on your mind. When you get that HUGE, no-joke, hear-each-other’s-heartbeat, let-you-know-you’re-awesome hug, you’ll probably feel a lot better!

What do you guys think? Do you have any advice for Iona?