Should I Be A Tomboy Or A Girly Girl? 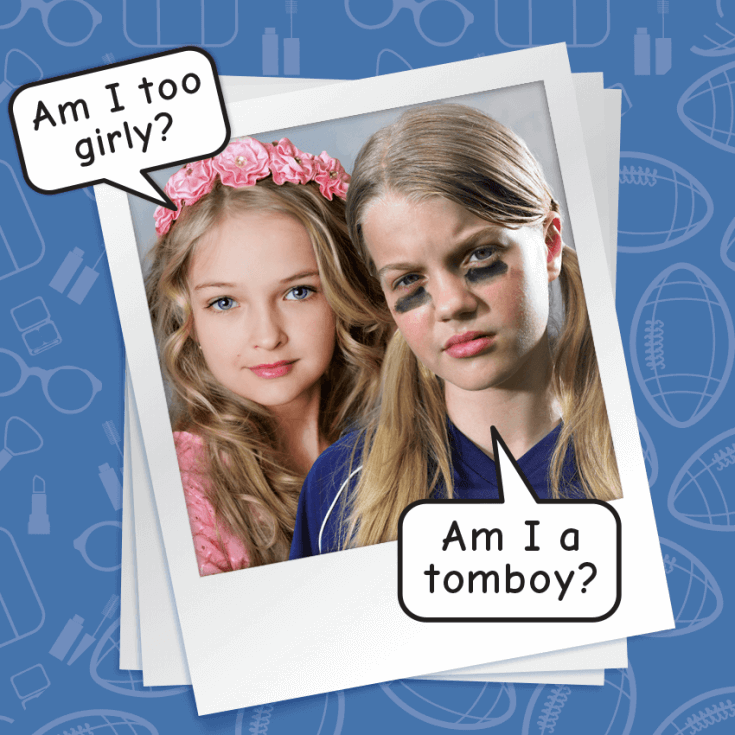 What’s up readers, it’s Brandon! Before we begin, I just want to say that I usually answer one letter at a time. But this week, there were three letters about the same question. I did this since it helps to know you’re not alone and that other people struggle with the same issue.

So, here are the letters:

LETTER #1
Hey Brandon,
I adore sports, especially football! The problem is, um…I’m a GIRL. Boys think I’m cool, but other girls are a completely different story. They say I’ve got issues ‘cause I’m a “tomboy.” They also say that girls should be cute, fashionable and not too sporty (like I am). I used to be proud of who I am, but not so much anymore. Should I stop playing sports?

LETTER #2
Hi Brandon,
I’m afraid that my mom thinks I’m a WEIRDO.  The thing is, I’m a girly-girl and she’s a total tomboy. I know I’m supposed to “just be myself,” but sometimes it’s easier said than done. What should I do?Grouchy Girly Girl

LETTER #3
S’up Brandon.
I’m a tomboy at an all-girls school, which makes it hard for me to fit in. Sometimes, other girls tease me and make fun of me for who I am. My family doesn’t support me either. Sometimes I feel so depressed. I love my style and don’t want to change. Do you have any tips?

Okay, my friends. These letters all came in within a couple days of each other, all from different people. So, first thing’s first: If you feel like the only “tomboy” or “girly girl” who doesn’t fit in, you’re not alone.

I think feeling like you don’t fit in is super common at our age. Whether you feel like you’re not girly enough, not sporty enough, not pretty enough, not funny enough…the list goes on and on, for guys AND girls. (Though more for girls, I think? I feel like more is expected of you all. I’m super sorry about that. It seems like a lot of pressure.)

First, let’s address feeling like you’re not “girly” enough. Or too much of a  “tomboy,” whatever that means.

It’s not so much an issue when we’re younger, right? For example, little girls can play soccer, run around in overalls and sneakers, and play in the mud like it’s no big deal. But as we get older, expectations of what it means to be a boy or a girl get stricter.

It can be a problem for us guys, too—if we’re more artistic than sporty, sensitive, or whatever—we could get teased for that. Which is totally unfair!

But like, who said being a girl means you HAVE to be fashionable—and exactly the right amount of fashionable, or else you’re vain and obsessed with your look and TOO girly—or you can’t love football or soccer? It’s like lots of people think that. But who made those rules? Because they’re really stupid rules.

And honestly, I think “tomboy” is a weird name. (Not that I’m judging you guys if you always use that word—it’s a word we ALL use. But it’s not really necessary if you ask me.)

If you happen to be a guy, well then cool! You’re a guy. But if you’re a girl who happens to like things society has said are “for guys”…that doesn’t make you some form of boy. It just makes you a girl who likes sports, comic books, casual clothes or whatever.

Nikki gets letters from boys asking if it’s okay that they read Dork Diaries because it’s “for girls”. Of course it’s okay! And Dork Diaries isn’t just for girls, either. It’s for anyone who enjoys it. 🙂

Let’s just stop with all this “for boys ONLY” and “for girls ONLY” nonsense.

So NO, I don’t think any of you should stop enjoying sports, force yourself to wear makeup, or somehow become less girly/more boyish. Don’t try to be anyone other than who you are. I think you’ll be miserable if you force yourself to be who other people want you to be.

Hey, know what middle school is like. I know how hard it is to be different. It’s part of why I shared all three letters today. I wanted to show that you might be different from some kids, but you are not the only one who feels that way.

I suggest that you find people who are like you and accept you as you are. Then let the support from those genuine friends lift you up when other people try to put you down.

You can absolutely be friends with boys. But you might find more support and feel less alone if you also befriend girls with similar interests. So that might mean joining a sports team or a club for girls. They’re out there, I promise, even if they’re not offered at your school. You can find programs like Girls Who Code or Girls on the Run.

About family support—it’s tough, but I encourage you to be honest with your family. Find ways to connect with them that aren’t about changing who you are. For instance, if your mom isn’t girly and you’re all into that stuff, there has to be other stuff you have in common. Maybe you both love board games, books or volunteering at a soup kitchen. Find the things you can do together! It’ll build your relationship and you’ll feel less anxious about the other stuff. Whether it’s your mom or whoever, your family member will understand better who you are, and I bet you’ll learn some things about that family member, too!

I hope this helps. I promise you’re not alone, and I bet you’ll realize that even more after reading the comments.

Do you ever feel like you don’t fit in or that you’d like to be different from who you are? Tell us in the comments!