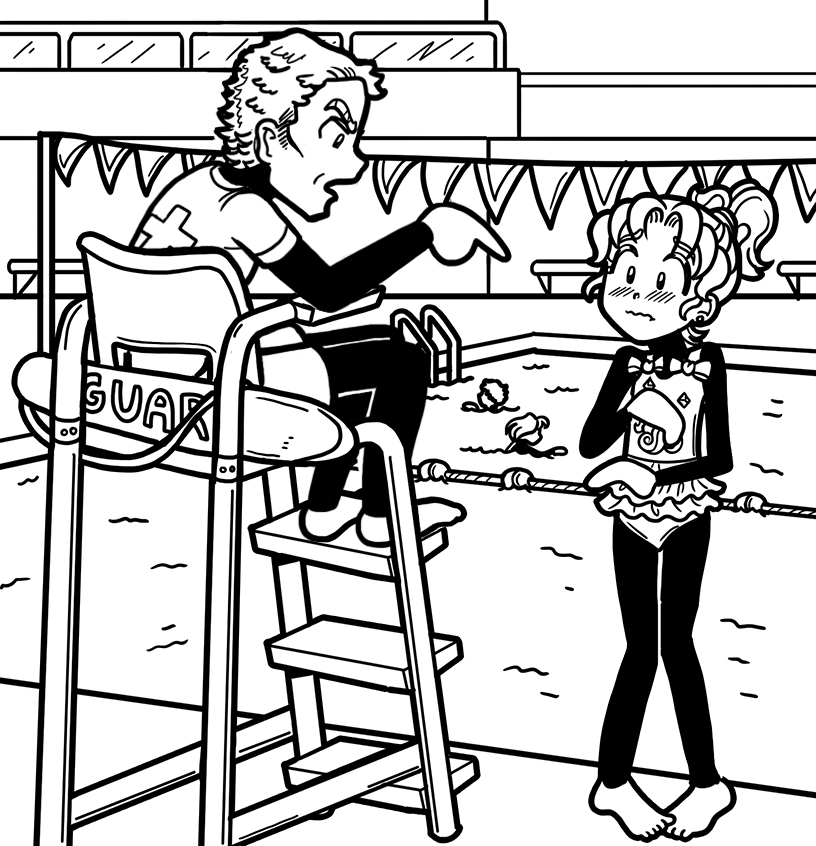 OMG, remember my bathing suit nightmare? I was forced to wear either my mother’s bathing suit—which was a 1980’s tie-dyed DISASTER—or Brianna’s stretched out, ruffle-butted My Little Pony suit to the COMMUNITY POOL!!!

I have finally recovered from my trauma enough to tell you what happened when we got there. (HINT: I did NOT slip in and out of the pool peacefully without being seen.)

By the time we got to the pool, I was regretting my decision to wear Brianna’s stretched out suit. And THEN when I didn’t leap out of the car, my mom GRUMBLED that I was being RIDICULOUS!!   I was wearing a 6-year-old’s ruffle butt swimsuit!! THAT was ridiculous!!!

But Mom turned the car off and followed after Brianna, so the car was an oven within about two seconds.

I cracked my door open.

I could hear laughing and splashing. It was 97 degrees, and I was DYING to get into the water!!!

I did some quick math. It would take me about thirty seconds to get from the car and into the pool, if I ran. If three people saw my ruffle butt each second I was running…

Then I stopped doing math because it was SUMMER and my brain refused to do math calculations!!!!

I was baking in the car, even with the door open, so I decided I could do this. I WOULD do this. I had to. Honestly, it had become a matter of LIFE or DEATH.

I made it across the parking lot in just a few seconds. I didn’t look at anyone. I was like a horse with blinders on. Racing through the DESERT on a day of RECORD heat!!!

Just outside the gate, I got stopped by a group of little bratty preschoolers!!!

(Okay, that might be an overreaction? They were just standing there. But couldn’t they SEE I was on a mission? A LIFE or DEATH mission!)

When I got past those preschoolers, I could see my destination. I could be there in ten seconds. I started my sprint to the water—

And got stopped by a lifeguard!

“No running by the pool.”

At least he wasn’t a cute, young lifeguard. He was like my dad’s age. But he’d made me STOP in full view of everyone!!

“Sorry!”  I muttered. I tried to step around him, but he blocked me.

“This is serious, young lady.” And then he went on to LECTURE me about pool safety! For like FIVE MINUTES!! Little kids could have been DROWNING while I was stuck listening to him!!

And meanwhile, people were DEFINITELY noticing my suit! I heard a woman snicker as she walked by me. I saw one of the preschoolers point.

And THEN the WORST thing happened.

He was talking to his friend Max Crumbly on the other side of the pool. He hadn’t seen me yet, but all he had to do was look up for one second…

“I have to go!” I told the lifeguard. Then I turned and ran.

(I KNOW! I wasn’t supposed to RUN! But I was running away from the pool, to the gross bathroom where the floor’s all wet because people go in there dripping, but it’s a bathroom so you wonder if the wet is all pool water or maybe something else…)

I burst into the bathroom and slammed the door shut behind me. I stood there for a minute, breathing in the aroma of chlorine and public bathroom, grateful at least that Brandon hadn’t seen me.   Then I heard this: “OMG. Nikki Maxwell? Um…nice bathing suit.”

I whirled around to see MacKenzie Hollister!!

“The last time I was in Paris, ruffles were hot and totally all the rage. For toddlers!” She snickered sarcastically. Then her eyes narrowed. “I should take a picture for my fashion blog, don’t you think?”

She held up her phone. I panicked.

“Maybe I should take a picture of YOU, in this nasty public bathroom of the community pool, and post it on Twitter for your snobby friends to see!”  I shot back.

Her face showed panic for just a second and then she sneered. “Are you hiding a phone under those ruffles?”

My mind raced. I decided to take a gamble.

“No, but Brandon’s right outside. I’m sure I could go borrow his phone. He’ll be so interested to see the picture.”

She glared at me. There was no way I’d ever do it. Because that meant I’d have to go out there in my RIDICULOUS suit and ask Brandon for the phone!!! But MacKenzie couldn’t know that for sure.

It was stuffy in the bathroom. And it stunk. REALLY BAD. I felt a tiny bit sorry for MacKenzie, who must have had her own reasons for hiding in there.

“What are you doing here, anyway?” I asked.

She rolled her eyes. “My dad gave a bunch of money to this disgusting excuse for a pool and he said we had to come here for photo ops. But, like I’m REALLY going to be seen here at the pauper’s pool! Not to mention, I’d need, like, a dozen facials to undo that damage from the chemicals in that water!!”

Yeah, I didn’t feel sorry for her anymore. I put my hand on the doorknob.

“Okay, well I’m going to get that phone…”

“Just go. I didn’t take a picture.”   I held out my hand and she gave me her phone. I flicked through the recent pictures and they were all glamour-faced selfies of MacKenzie.

“Enjoy your day at the pool, MacKenzie.”

I stepped out of the bathroom. I had two choices. A) I could go bake in the car until Mom and Brianna were ready to go home. Or B) I could cannonball straight into the pool.

Whew!! Fortunately, I was able to hideout in the shallow end with the preschoolers until MacKenzie, Brandon and his friend, Max, left.

Thank goodness I was NOT publicly humiliated at the community pool!!

Hey readers, what’s your fav way to chill in the really hot weather? Tell me all about it in the comments!