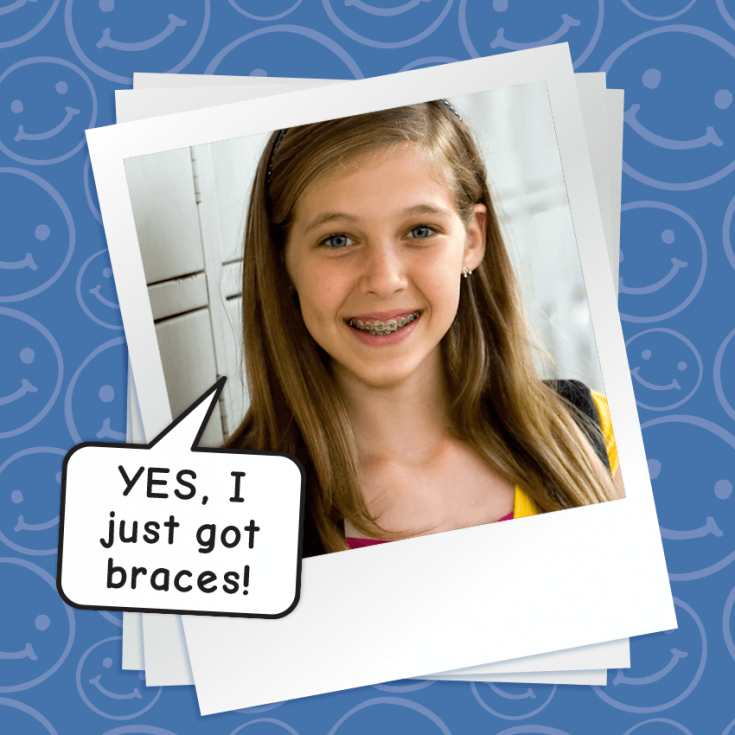 I feel really insecure and don’t smile as much as I used to. What should I do?

It sounds like you have some pretty immature classmates. And really, braces aren’t OMG-worthy.

It’s not like you have an extra big toe growing out of your left ear. Tons of kids get braces! Almost everyone with a nice smile had them at some point.

Still, I understand why you feel insecure. I’m sure it’s tough enough to get used to the braces without dealing with their taunts and stares.

My cousin said it feels like a tiny metal seat belt smothering your smile. But he also said you get used to it, and it doesn’t feel like that forever.

The good news is that the teasing doesn’t last forever either!

People only stare and say dumb things when something is new or different, and after a little while, your braces won’t be either.

They’ll be normal, a part of your face – kind of like your nose, except they won’t have the ability to smell (but they will smell if you slack on brushing).

I know this probably doesn’t help you feel better right now, but maybe these two suggestions will.

1. Google “smile after braces” and look at all the images that come up. Odds are, you’ll see a ton of happy people with beautiful, perfectly straight teeth. When you start feeling insecure, remember that will be you in two or three years.

When people stare then, it will be because they’re jealous!

You’re afraid to smile because you’re getting caught up in your head, worrying about what you look like and what people are thinking about you.

But the thing is, they’re not really making fun of you. They’re poking fun at the braces, which happen to be on your teeth (and millions of other teeth throughout the world).

Instead of feeling scared to smile, show them you’re not afraid to laugh at yourself.

You could say, “Man, these are tight. Guess I’m braced for anything now!”

Or, you could deliberately get food stuck in your braces in a totally obvious way, and then ask them, “Do I have food stuck in my teeth?” Then crack up with them.

Hopefully, this will help you remember that people appreciate you no matter what your smile looks like, and they appreciate when you don’t take yourself too seriously, since that’s when you’re able to make them smile.