I’M SO PROUD OF GRANDMA MAXWELL!!! 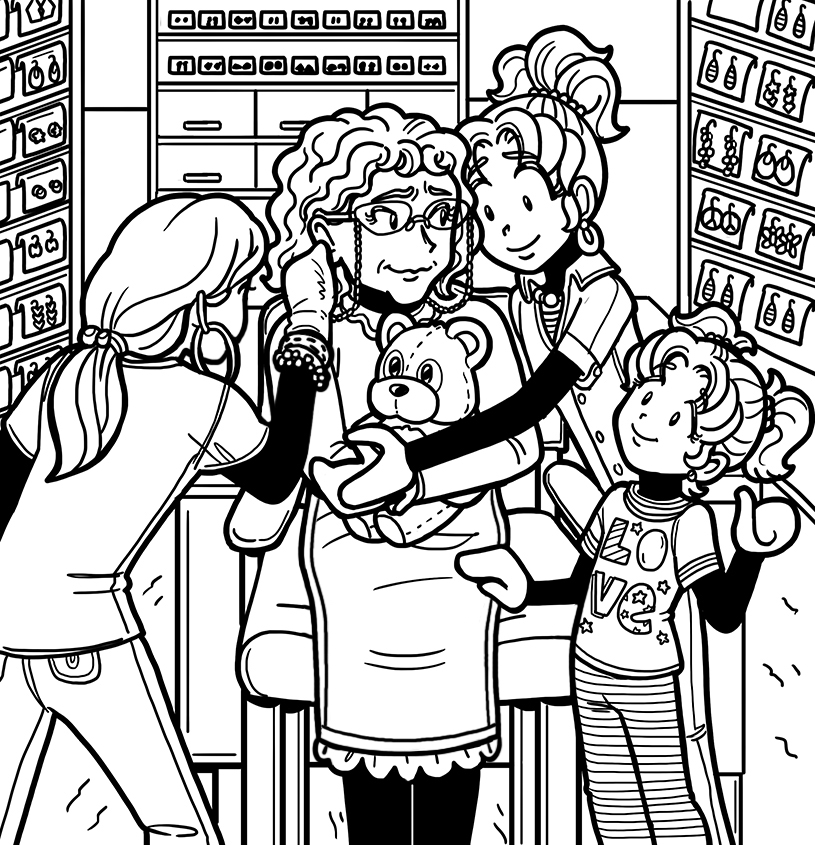 I am SO proud of Grandma Maxwell!

Is that weird? That sounds kinda weird. But it’s TRUE!!

Just as we were about to leave for the doctor, Grandma Maxwell stopped by to visit us, because we were in the neighborhood.

Grandma Maxwell could see that Brianna was FREAKING OUT. I tried to tell her through facial expressions and wild hand motions that she shouldn’t ask Brianna what was wrong. But I’m not sure how good Grandma’s vision is.

Well, Brianna told her. She was worried because she had to get a shot at the doctor’s office.

“Well, nobody likes needles,” Grandma Maxwell said. “That’s why I’ve never gotten my ears pierced. But sometimes you just have to face your fears.”

And then Brianna said, “Then you should get your ears pierced today, Grandma!”

Well… she couldn’t really say no, could she??

So we all headed over to Brianna’s appointment together. She was REALLY brave. I noticed that Grandma Maxwell looked away when Brianna got her shot. I guess she really WAS afraid of needles!

Then we were off to the mall.

Grandma was really quiet in the car, which so wasn’t like her at all. When we parked at the mall, she just sat there, without getting out of the car.

“Come on, Grandma!!” Brianna was out of the car, jumping up and down. She’d totally forgotten about her shot.

I opened Grandma’s door. “Come on, Grandma. Face your fear, remember?” I grinned.

We pretty much had to drag her into the mall. And when we got to Amy’s, the jewelry store, it was PACKED. And there was already a little girl sitting in the ear piercing chair.

Brianna’s face fell. “No way, Grandma,” I said. “Brianna got her shot. Now it’s your turn.”

Mom marched over to the check out lady and told her why we were here. She signed a bunch of paperwork, and then told us we’d be after the little girl in the chair. Who was SCREAMING HER HEAD OFF.

“Grandma!” I turned her away from the little girl. “Why don’t you pick out the earrings you want to get pierced with? They have to stay in for six weeks, so pick ones you like a lot!”  Brianna held up a pair of Princess Sugarplum earrings. “How about these?”

Grandma looked TERRIFIED. “Just choose something for me, girls.”

The little girl stopped howling. But Grandma got even tenser, because that meant it was going to be her turn soon. When the little girl got up, Brianna took one of Grandma’s hands. I took the other one. We walked her over to the chair and sat her down.

Brianna nodded. “Maybe they’ll give you a lollipop!”

I don’t think Grandma Maxwell was listening at all when the lady came over and gave her instructions about what was going to happen and how to care for the piercing. I listened, though. I pointed out some simple gold studs.

The lady made dots with a pen on Grandma’s wrinkled ear lobes. “How does that look?”

Grandma didn’t even look in the mirror when she said, “It’s fine.” I mean, they could have been totally lopsided!!

The lady finally noticed how stressed Grandma was. “I think you need the Hug-a-Bear.” She grabbed a squishy teddy bear wearing an Amy’s t-shirt. “Hold on to this.”

The lady shrugged. “It’s for anyone who needs it.”

I thought Grandma was going to say she didn’t need the Hug-a-Bear. But she grabbed onto that bear and squeezed it HARD.

The lady pulled out this thing that looked a lot like a gun. Except it was purple. Grandma started breathing kind of fast. Brianna’s eyes got really big.

“Grandma,” I said. “If you’re good, I’ll take you out for ice cream after this.”

And then she did the first piercing!!  “You didn’t wait for three!” Brianna protested.

“I know. That’s how we do when people are really scared.” Then without any more warning, she did the other one. And she was done!

Grandma mostly looked dazed. She was still clinging onto the Hug-A-Bear. “Grandma,” I said. “It’s over. You did it! You faced your fear!”

My mom paid at the counter. Then we took Grandma to the ice cream shop, where I used my own money and got double scoops with toppings for all of us.

Now I’m kind of inspired! I’m trying to decide what fear I should face!! 🙂

What’s your biggest fear? What would it take to make you face it?