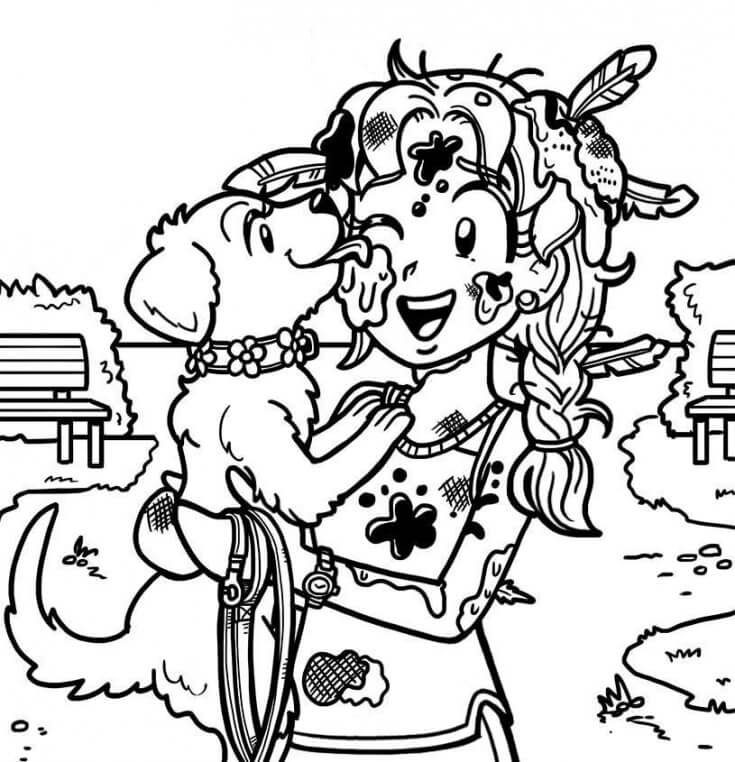 It’s funny how Daisy almost completely RUINED my life and then SAVED it, all within ten minutes!

We were having surprisingly warm weather for March, and Daisy was so stir crazy that she nearly trashed my entire bedroom. So, I decided to take her for a little walk.

But, what started out as a “little walk” with a cute and innocent puppy suddenly turned into muddy, messy mayhem with a baby Tasmanian Devil on a leash!

I was minding my own business and watching Daisy happily prance down the sidewalk, when she spotted this squirrel and darted after it so quickly, she nearly yanked my hand off along with the leash!

OMG. That dog LOSES IT’S FREAKIN’ MIND around squirrels! I don’t know what her problem is. I mean, she acts nuttier than the acorn that squirrel was trying to bury in the dirt!

Since she could have ended up a lost dog (or even worse…a Golden Retriever puppy pancake in the street!), I dashed after her, calling out her name like some cray-cray lunatic.

“DAISY!! WAIT, DAISY!! COME BAAAAAAAACK!!!” I screamed at the top of my lungs.

But it so did not work. DUH. It never does when you’re dealing with a SQURRIEL.

Note to reader: If you have a dog and ever walk it outside, BEWARE. THE. SQURRIEL!!!

I ended up chasing crazy Daisy all the way into a nearby park. I was in such a frantic daze that I nearly knocked over some little girl holding an ice cream cone, piled high with three scoops, hot fudge, whipped cream and a cherry on top. Fortunately, I didn’t crash into her. But, I couldn’t say the same her tasty treat, which ended up right in my FACE. It also got all over my brand new sporty tank top, which I saved up for ALL WINTER to buy and wear when Spring finally came!

I looked like I had just gotten into a paint ball fight. With an ice cream cone! Just great!! 🙁

“Heeeyyy! You made me drop my ice cream!!” She moaned.

The little girl looked like she was about to lose it since I had completely DESTROYED her three scoops of creamy bliss.

“Um…I am SO sorry!” I sputtered in between breaths. Hey, I wasn’t some heartless cone-ruining freak! So, I dug into my pocket I quickly handed her what was left of my allowance for her to buy a new one.

Then, I got back to chasing Daisy. It was because of her chasing the squirrel that I ruined some poor little kid’s snack. Plus I was now an icky, sticky, gooey mess!

Just when I thought I had her and grabbed for her leash, the little fur ball followed the squirrel into a mud puddle, jumped in, and ended up covering me all over with stinky MUD.

But, I wasn’t about to give up. The thought of my dog ending up a pancake in the street brought tears to my eyes as I ran. I was so blinded by them that I didn’t notice I flock of pigeons huddled in the grass right in front of me.

I startled them all at once and they went soaring into the air, covering me with a bunch dirty, smelly feathers!

“NOOOOOOO!!” I bellowed.  Then some of those feathers actually ended up in my mouth. Bleh!

Now I was an icky sticky, gooey, stinky, MUDDY, pigeon-cootie-covered mess!! With feathers in my mouth!!!

When it couldn’t have gotten any worse, IT SO DID. You would not BELIEVE what happened next!

I’ll give you one clue.  I’d rather be DRENCHED from head to toe in PIGEON POOP than to run into…

“Nikki Maxwell! Is that you?!” She chuckle-snorted. “OMG! You’re a MESS!! But then again,” she cackled, “You always are! Shower much?!”

Now, the only thing worse than plain old MacKenzie is MacKenzie with a CELL PHONE to capture a super humiliating moment.  This was totally one of those moments!

MacKenzie whipped out her bling-covered cell and aimed it towards me like she was about to fire. “This is gonna look SO good on Instagram!” she hissed. “Everybody at school is going to LOVE IT!”

I couldn’t move. I felt like a deer in headlights. My life flashed before my eyes. It included the moment when Brandon would see that photo of me and think I was such a LOSER, that he’d never, ever want to hang out with me again!

Suddenly, the squirrel came dashing right in front MacKenzie, flowed by Daisy, who rammed into MacKenzie. It startled MacKenzie so much that she dropped her cell phone and it landed right into the same puddle that splashed me. PLOP!

“Oh nooooo! My cell phone!!” she whimpered as she dove into the mud puddle after it.

Now SHE was a total mess. She looked like she had been in a mud-wrestling match with her cell phone. And lost!

I FINALLY caught Daisy by stepping on her leash as she dove past me. I scooped her up into my arms, relieved and completely forgetting all of the trouble she had caused.

Daisy wagged her tail and licked the ice cream smeared all over my face.

“Oh, and thanks for saving me back there.” I added. “You’re not such a ‘Crazy Daisy’ after all!”