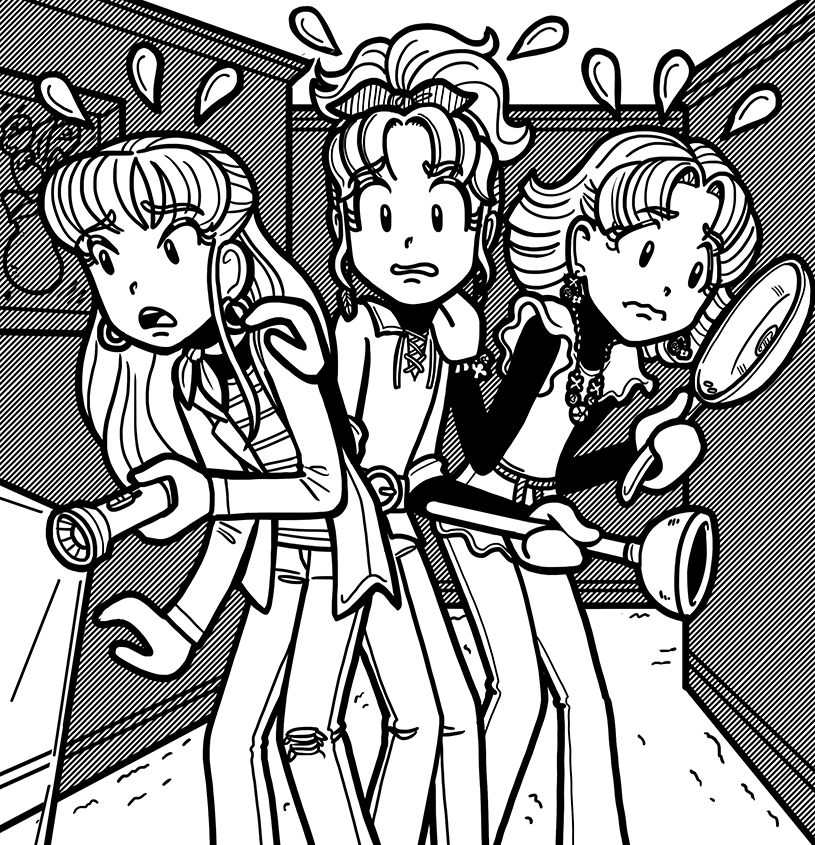 I had just gotten out of a SUPER relaxing bubble bath when my phone rang. It was Chloe.

At least that’s what I think she said. She was screaming like MacKenzie if she got dog poop all over her designer shoes.

“Haunted? What are you talking about??”

My mom was about to run errands anyway, so she dropped me off. I think she was glad I wouldn’t be home for dinner. When one of us is gone, it’s always her excuse to order take-out.

Zoey’s mom’s car pulled up to Chloe’s house at the exact same time.

“OMG, do you know what’s going on?” Zoey said as we rushed to the door. The house was dark. “Is she even still here?”

I couldn’t even answer before the door swung open. Chloe reached out and yanked us inside.

I started to laugh, but Chloe was totally serious.

I reached out my hand to see if she had a fever. But just then a HORRIBLE howling sound floated through the house!!! I jumped and kind of smacked Chloe in the face!!!

Chloe yelped and leaped back, knocking a vase off the table in the entryway.

I mean, the vase thing was my fault. But I couldn’t explain the howling.

“At her craft night,” Chloe sniffled. “I know it’s totally lame to be scared of being home alone, but—”

And then the howling started up again. We grabbed each other and huddled.

“But if I freak out,” Chloe said, “my mom will never let me stay home alone again!!!”

That sounded familiar to me. I think it was from some old movie called, “Ghost Busters.” And I WAS actually afraid, because that howling sound was CREEPY. But Chloe looked so scared. SOMEONE had to step up!!

“Everybody get a weapon!”

“What kind of weapon is a ghost afraid of?” Chloe said.

I shrugged. “I guess we’ll find out!”

Within a couple minutes, we had gathered our weapons. Chloe had a flashlight, Zoey had a frying pan, and I had a toilet plunger.

“I think it sounds like it’s coming from the garage,” I said, heading that way.

Chloe grabbed my arm. “Why are we going TOWARD it???”

“Well, don’t you want your mom to see you can handle it? Maybe it’s friendly! Maybe we’ll scare it away. What’s the worst that can happen?”

Chloe’s eyes got enormous. “It’ll squeeze out our eyeballs and drink them in an eyeball-banana smoothie!”

THAT was specific. And disgusting.

Zoey followed me. Then Chloe came running after us. “Don’t leave me alone!” she whined.

We reached the door from the kitchen out to the garage. The howling got louder. And sort of screechy.

“Nikki, you’re so brave!” Chloe said. “I can’t believe you’re doing this for me.”

“We’re BFFs,” I said. And suddenly I realized THAT was why I was being so brave. Chloe and Zoey had done crazier things for me!!!

I flung open the garage door and waved my bat like a sword.

Then I saw it. The terrifying monster opened its mouth and yowled again.

It was a snowy white cat with bright blue eyes.

It was the neighbor’s cat, which must have gotten into the garage when her mom was leaving.

“You were amazing, Nikki,” Chloe said after we’d returned Mr. Fluffkins to his cranky owner.

“Whatever,” I said. “Next time something’s haunting MY house, I’m sure you’ll return the favor!” 🙂

Readers, what’s something scary that’s happened to you before? How did you handle it?