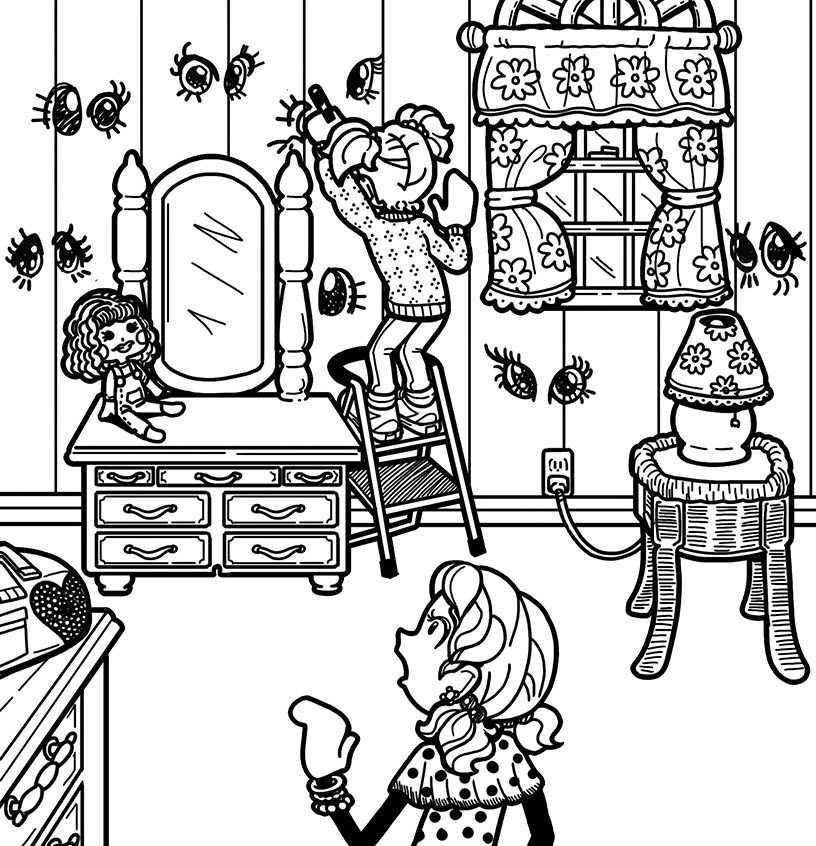 As you know, I have MAD art skills! What you may NOT know is that it runs in the family!

I spent some of Saturday morning teaching Brianna how to draw people, and she did a TOTALLY awesome job!

She even drew a picture of me that looked pretty close to how I actually look. Well, except for the MASSIVE eyes.

She’s obsessed with drawing eyes, and she makes them huge and bubbly, like My Little Pony eyes.

Since she’s all into art now, she begged my mom to let her paint on one of the walls in her room.

I didn’t think she was THAT good, but it’s just her bedroom. It’s not like they’re shooting a Katy Perry video in there or anything!

It didn’t take much for my mom to say yes, since she says yes to almost everything Brianna asks (even stuff she SHOULDN’T say yes to, like, “Can I play games on Nikki’s iPhone…and wear her clothes and lie in her bed, ‘cause I’m a total weirdo?!?”)

Since my mom and dad had plans on Sunday, they asked me to supervise Brianna’s painting day.

They were all, “We’re trusting you, Nikki. We know that wall is in good hands.”

You’d think they were leaving me with a kidney in a jar meant for the President of the United States! They were THAT serious about it!

And I really meant it…until I fell asleep.

I didn’t mean to! She just has a super comfortable bed. She must have about 50 stuffed Princess Sugar Plum dolls on there, and they’re all so soft and cuddly.

It was like curling up in a big pile of puppies…warm, fluffy, freakishly still puppies.

After about an hour and a half, I woke up with a jolt, realizing I’d left Brianna on her own with a ladder.

For a split second before I opened my eyes, I imagined her falling off that thing in slow motion, except it was a SUPER tall ladder, as high as Jack’s beanstalk.

Luckily, she was standing on the floor when I woke up…and WAY too close to me, actually. Her face was like an inch away from mine. She was SO close I could smell her nasty PB&J-and-pickle sandwich breath!

Right after I opened my eyes, she said, “Wakey, wakey! Surprise, it’s eyes!”

At first I was like, “WHAT’S eyes??” But it was only a matter of seconds before I saw her painting and knew.

She’d painted a TON of huge, freaky eyes all over her wall!

My mom and dad probably thought she’d paint farm animals or flowers or something else normal little girls like to draw…but Brianna is SO not normal!

Those eyes were TOTALLY creepy! Because I didn’t watch Brianna, now the whole flipping wall was watching me!

No matter where I went, it seemed like they followed me.

They went all the way up to the ceiling, so I knew she had to have painted some of them while standing on that ladder!

If I told my parents I was awake the whole time, holding the bottom of the ladder for her, they’d probably wonder why I let her paint those disturbing eyes!

And if I told them I was asleep, they’d probably FLIP OUT because she was on the ladder without ANY supervision!

Then she started crying, “You’re a meanie! You left me all alone AND you called my painting ugly! I’m telling!”

It took almost an hour to calm her down, and I had to promise she could play games on my iPhone while wearing my clothes and lying in my bed for the REST of the day.

She PROMISED if I let her do that, she’d tell my parents I was awake the whole time.

Now I just had to explain why I let her draw those freaky eyes!

What do YOU think I said??