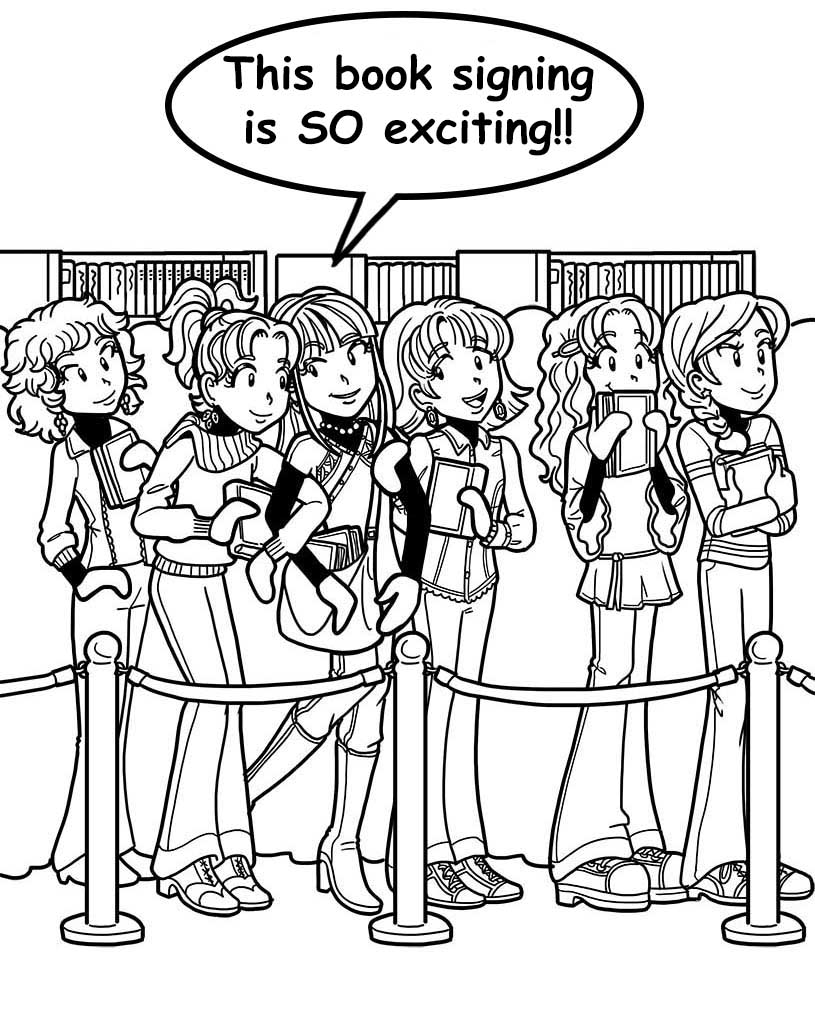 I thought CCPs were brutal. But wow!! They have nothing on fanatic readers!!! Today Chloe dragged me and Zoey to a book signing for one of her favorite authors and we barely got out alive!!!

I can’t keep up with everything Chloe reads, but there is this one author she reads—and talks about—a lot. Her name is Delilah McClain and she writes these young adult romances with a heroine who’s time traveling to save the world. They’re all called, like, A Time for Justice, or A Time for Revolution, or A Time for a Nap. (I made that last one up.) The covers always feature the heroine in a gorgeous ball gown in front of some big explosion or wielding a sword.

So Delilah McClain is having a book signing and Chloe’s been talking about it for weeks. She was going to go with her mom, who’s also a big fan. (Apparently a lot of adults read YA too, which seems weird…but I guess they’re just letting their inner dorks shine through! LOL!) But Chloe’s mom got the flu and somehow Chloe convinced Zoey and I to go with her instead.

Which is why my mom dropped us off in front of the bookstore at 5:30pm a whole half hour before the event. But, there was already a line of people out the door and down the block!!!

We stood there, gaping at all the fans. “Come ON, you guys!” Chloe grabbed us and dragged us to the end of the line. “We’ve got to get our spot!!”

We got in line just before a giant group of middle school girls who were all wearing these matching pink t-shirts that said, “A TIME TO READ!!” Some of them had sparkly tattoos of the book’s logo on their faces.

Just ahead of us, a group of girls were quizzing each other with Delilah McClain trivia on their phones.

“These are some serious fans,” Zoey observed. I was noticing the same thing.

“I’ve been trying to tell you guys! Delilah McClain is AMAZING! You have to try her books!!”

“OMG, they haven’t read her books?” shrieked one of the girls.

“What are you even doing with your life???” said another one behind me.

“Attention, ladies!” a voice boomed out of a bullhorn at the entrance to the store. “If you are here for the Delilah McClain event, please remain calm.”

At that, everyone squealed.

“We are about to open the doors. There ARE seats for everyone, and everyone’s books WILL be signed. So PLEASE no shoving. We don’t want a repeat of last year’s event.”

Chloe nodded gravely. One of the girls snorted. “OMG, that girl hadn’t even read the books! She was a MOVIE fan.” People around her gasped. “Plus she only broke a rib. You don’t even need a cast for that!”

The bullhorn crackled again. “Once inside, PLEASE be sure your name is clearly marked on the books you would like Ms. McClain to sign, so she does not have to ask you how to spell your name.”

Chloe linked her arms through our elbows. “This is the plan. We stay linked, forming a human wall. No one will be able to shove past us. If one of us goes down, the other two yank her up. We will accept nothing less than seats in the first three rows. Are you with me???”

The line started to surge forward. My life flashed before my eyes!!

In the madness, I caught a glimpse of a teenage boy in a baseball cap with his arms around his grandma, like he was ready to shield her from the stampede.

The next couple minutes were a blur. I definitely got a couple elbows to my ribs, but nothing broke. Chloe stumbled going through the doorway, but Zoey and I kept her up and moving forward. When we collapsed into fourth row seats, she high fived us with tears in her eyes.

“Sorry it’s not the first three rows,” I said.

Chloe shrugged. “I’m going to be breathing the same air as Delilah McClain. I don’t care what row I’m in!!!”

I was sitting next to an old lady who was breathing really heavily.

“Um, are you all right, ma’am? Can I get you some water or something?”

“Nikki,” Chloe whispered. “They will NOT let us save seats!”

“Oh, we’ve got water,” said the person on the other side of the older lady. He leaned forward with a water bottle and the boy in the baseball cap was…

“What are you DOING here?” we both asked at the same time.

At first I thought it was SO sweet that Brandon had brought his grandma to her favorite writer’s book signing! She seemed a little old for the books, but Chloe’s mom was into them. And then I saw that Brandon was the one holding a book with Emma Rogue on the cover. There was a sticky note on the book that said “BRANDON”.

Brandon’s face flushed pink. “Her books are really good. I mean I don’t have to tell you, right? You’re here, after all.”

Something jabbed me in the ribs again. I turned to glare at Chloe and saw she was passing me one of her books. I took it.

“Yeah. Oh yeah. They’re SO good. My favorite is”—I glanced at the cover of the book in my hand—“A Time for Sacrifice. I can’t wait to get it signed!”

“Good one,” Brandon said. “Ooh, look, the event is about to start!”

Someone from the bookstore was heading for the microphone.

“We’ll talk more after,” Brandon whispered over his grandma with a grin.

But, Brandon’s grandma needed to go home right after, so we decided to hang out at lunch one day soon to talk about our favorite Delilah McClain books! SQUEEEE!!

Have you ever been to a book signing? Who did you go see? What author would you like to see?