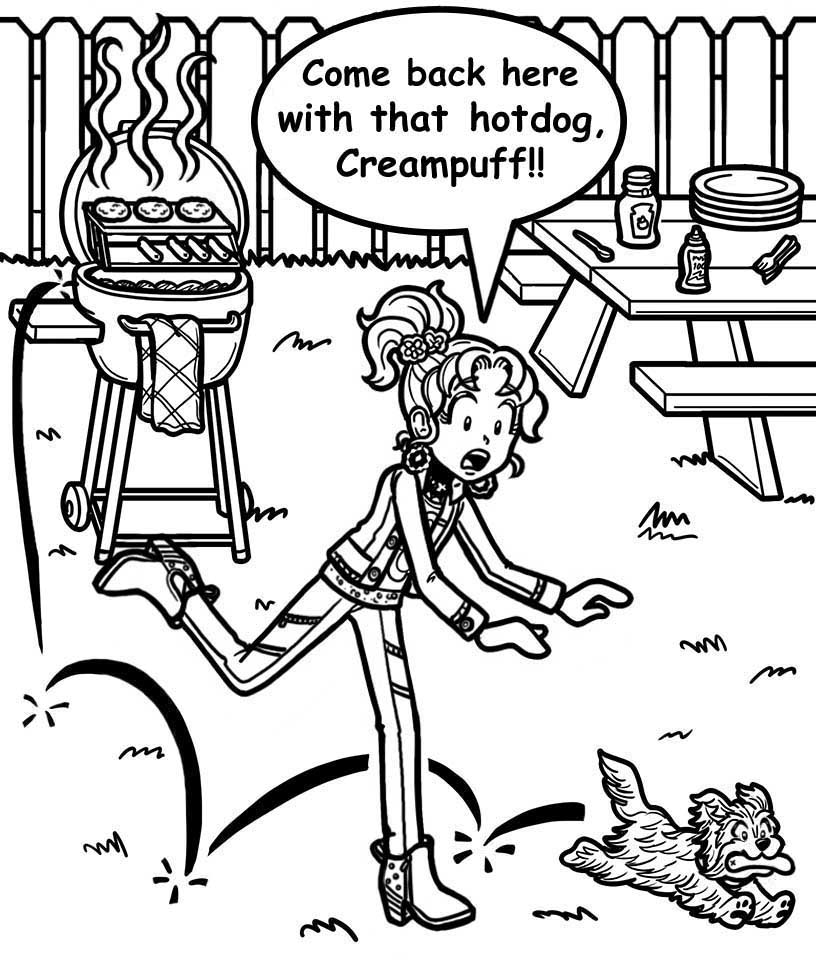 I don’t think I’ve ever been LESS excited to go to a party than I was today. I was binge-watching a super awesome marathon of Fashion Star when my mom popped her head in and told me to get ready for a block party.

Apparently, some wierdo in our neighborhood decided it would be a good idea for all the neighbors to, like, hang out and TALK to each other.

And like, the adults can do what the adults want to do. But sitting around and listening to them compare lawn fertilizers and complain about that one guy who plays his music too loud…no thanks!  But it turned out my MOM was the organizer (if you ever steal my diary, Mom, I didn’t mean it when I called you a weirdo earlier!) and I had to drag myself out there and help her set up lawn chairs and organize the food.

She gave me her don’t-even-try-to-argue-with-me eyes and there’s nothing wierdo-y about that.

Outside, the street was blocked on both ends by these “ROAD CLOSURE” signs. Dad was setting up a canopy thing over a collection of card tables, and our next door neighbor, Mrs. Wallabanger, was hauling her grill down the street towards the canopy.

I ran over and helped her, getting covered in black grime while I did. Then my parents both kept me busy, running back and forth to the house for coolers, ice, and lawn chairs. Meanwhile, Brianna was just drawing with chalk on the sidewalk! I mean, I know she’s just a little shrimp, but she’s a STRONG little shrimp. They could ask her to do SOMETHING!!!

Once everything was set up and people started to arrive, I thought I’d be able to sneak inside and cool off. But THEN Mrs. Wallabanger cornered me. She had her Yorkshire Terrier, Creampuff, with her in a little sparkly carrier.

“Nikki, honey, would you take Creampuff for me? Her leash is inside the carrier, if she has to tinkle.”  Then she shoved the carrier into my arms!!

As soon as Mrs. Wallabanger disappeared, Creampuff started to yap like a maniac inside the carrier. I decided maybe she’d chill if I got her out, but the moment I unzipped the flap, she shot out like a fuzzy and SUPER annoying cannonball!

There were enough people mingling by then that I couldn’t find her! The block might have been closed to cars during the party, but we were only a few houses away from a corner. If Creampuff got turned into a pancake, I was going to be in serious trouble!!!

It didn’t take me long to find her, though, because just then I heard a scream over by the grill.

I ran over to see that tiny little MONSTER gobbling up the hot dogs my dad had set on a platter next to the grill.

“OMG!! I’m so sorry, Dad!” I ran over and grabbed Creampuff. I let her keep the hot dog hanging out of her mouth, since it distracted her while I struggled to put the leash on.

“What are you—” my dad started to ask. Then he shook his head. “Never mind. I don’t want to know. Just keep her safe and away from the food, will you?”

Now that Creampuff was on a leash, things were a lot easier. I tugged her away from the adults blabbing about boring things and the little kids playing freeze tag. (And the hot dogs!)

I decided I would take her inside my house, where we could both hide. But I was just walking up to our front door when I heard a little kid shout…

I was NOT going to let go of the dog! Not after what happened last time!  But I turned to see a little ball of fury dressed like Batman barreling toward me. It was a kid around Brianna’s age.

“That’s Creampuff!” he shouted. “Why are you STEALING Creampuff?!”

“OMG! I’m not!” I looked around. A couple people were suspiciously staring at me. “I’m really not, I’m supposed to be watching her—”

Before I could even finish, the kid yelled in his best super hero voice, “I SHALL HAVE JUSTICE!” Then, he threw his pudding cup at my head!

When I dropped the leash (I couldn’t HELP it!!), he grabbed Creampuff and ran away!!!

“Oh man, I’m SO sorry!” said another boy who sounded older. I couldn’t see him through the pudding in my eyes. “That was my little brother.”

“Well, can you get the dog back from him?” I spluttered. “I’m supposed to be watching her for Mrs. Wallabanger.”

He laughed. “Oh, that’s our grandma’s dog! She lives right next door to you. I’m Max! We’ve actually met before. I’m Brandon’s friend.”

Finally I could see him. “Um. Brandon’s not here, is he?” Pudding was still dripping down my cheek, and my shirt was covered in grime from the grill.

He took a couple steps back, like he was afraid I should be the one on a leash, not Creampuff.

“Sorry! I’m just…not feeling so hot. It was nice to see you, Max. You’ll get Creampuff back to your grandma?”

He nodded. “Yeah. Sorry you’re sick. I was hoping we’d be able to hang out. I think we’re the only people under thirty but over six. I’m really sorry if my brother ruined the party for you. He can kind of be a brat.”

“Oh believe me, I know because I have a little sister! Look, just let me get this pudding out of my hair. Then I’ll come back out.”

So, I got cleaned up and came back out, and we played cards on my front porch until things started to wind down. So it wasn’t ALL bad.

But the next time my mom gets a big idea about a neighborhood party, I am SO coming down with the worst sore throat in history!!!