ATTACK OF THE CANDY WITCH THIEF!!! 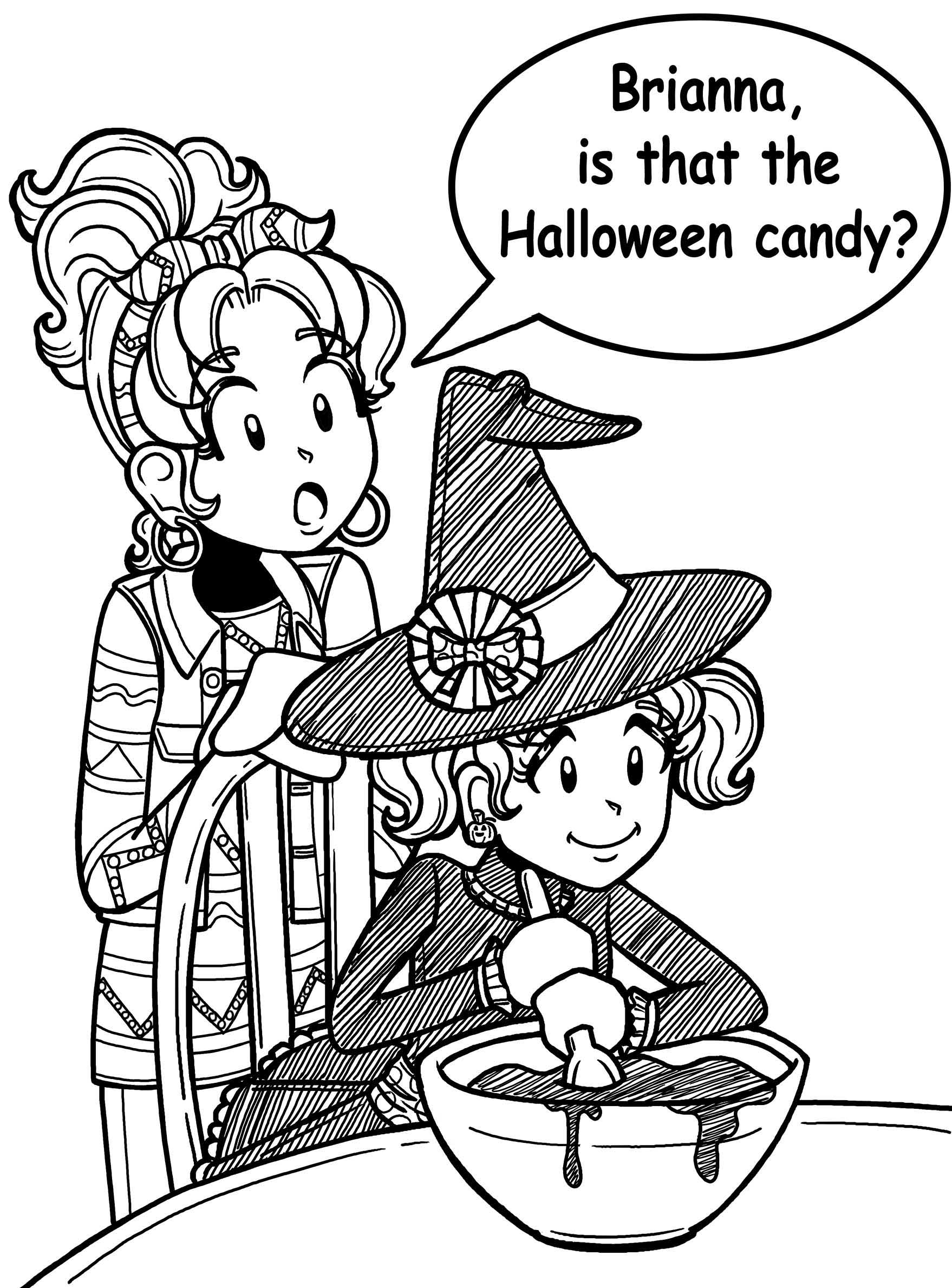 You are not going to BELIEVE what Brianna just did!!!!

So, I was working on my math homework, but I kept getting distracted. I realized I was hungry and needed some fuel. I went to the linen closet, which might sound like a weird place to find a snack. But not if you know that’s where my mom hides the Halloween candy she’s planning to hand out to trick-or-treaters!!!

(Pro-tip: If you’re worried about busting into the Halloween candy and getting in trouble when your parents find the bag open and not-exactly-full, here’s what I do. On Halloween afternoon, I’m the one who gets the bags of candy and puts them into the big bowl we keep by the front door. Mom’s usually too busy wrangling Brianna into her costume to realize I knew where the candy was “hidden.” She does comment that it seems like the candy companies put less and less candy in each bag, though…)

So I moved aside the extra blankets and pulled out the candy bag. I was SO confused! Because the bag was lumpy, like it was full, but it was SUPER light. Like there was nothing in it.

I peered inside and I saw…candy wrappers! I shoved my hand into the bag. It was FULL of them! No actual candy!! What kind of terrible candy thief steals candy but LEAVES THE WRAPPERS IN THE BAG???

A six-year-old one, that’s who!! I figured it must have been Brianna. But it was weird because I had snuck candy a few hours earlier and the bag was still (mostly) full.

Just then the microwave dinged in the kitchen. But, I knew my mom was in the shower and my dad wasn’t home.

I found Brianna sitting on the kitchen floor, dumping a sticky brown glob from one bowl into a bigger bowl. She was wearing a witch hat.

She jumped at first, but when she saw it was just me, she grinned. “I’m making a potion!”

The potion LOOKED disgusting, but the kitchen smelled super sweet. “Out of…what?” I was almost afraid to ask.

“Troll tears and toad feet,” she cackled in a mischievous witch voice, shoving a spoon into the blob and trying to stir. “Wasp wings and dryer lint!”

The first three were obviously made up, but Brianna could have totally raided the dryer for lint to put in a potion. I peered into the bowl.

She blinked and did her innocent baby face. “I just found some candy in the closet,” she whined.

I put my hands on my hips. “That might work on Mom and Dad, but not me.”

Her chin quivered a little. “I wanted to make a potion.”

“Did you really put dryer lint in it?”

“Nope. It’s Milky Ways, Starbursts, and Reese’s Peanut Butter Cups, all melted together!!” She shoved an enormous glob into her mouth.

That combo sounded DISGUSTING. I stepped back, in case she spit it out all over my feet. But her face lit up like it was better than peanut butter, ketchup and pickle sandwiches. Then she held out the spoon for me to taste.

I’m not gonna lie. I was curious to know what it tasted like!

“Pleeeease, Nikki,” she whined. “It’s not really a potion. You won’t turn into a slug.”

I took the spoon. It looked as disgusting as it sounded. But it smelled…really good.

I tried a TINY bit.

And it WAS good!

I was pretty sure a little bowl of this potion would get me through my math problems, but I also didn’t want Brianna to die of sugar overload. And, Mom just finished her shower.

“OR I can leave you here to explain to Mom what you’re doing.” Brianna’s eyes went wide with worry. “That’s what I thought. You go throw away the bag of wrappers in the closet and I’ll clean this up. Go!”

I served two little dishes of melted Milky Star Peanut Butter Cups and then wondered what to do with the rest of the bowl. I mean…throwing it away would be a total waste. ESPECIALLY when it could be put to good use as study fuel. Right??

So, I poured it into a container and labeled it “Meatloaf.” Then I shoved it in the very back of the freezer.

Brianna looked pouty when she came back with the bag.

“Look, Brianna, here’s some for you to eat! And later, I’ll go get more candy so Mom doesn’t realize it’s missing. Okay?”

Brianna was deciding whether or not to be mad at me for ruining her fun. But she KNEW that her fun would have been ruined a LOT more if Mom had caught her. And then she took a bite of Milky Star Peanut Butter Cups.

“Okay Nikki,” she said through a sugary mouthful. “You’re the best sister ever!”