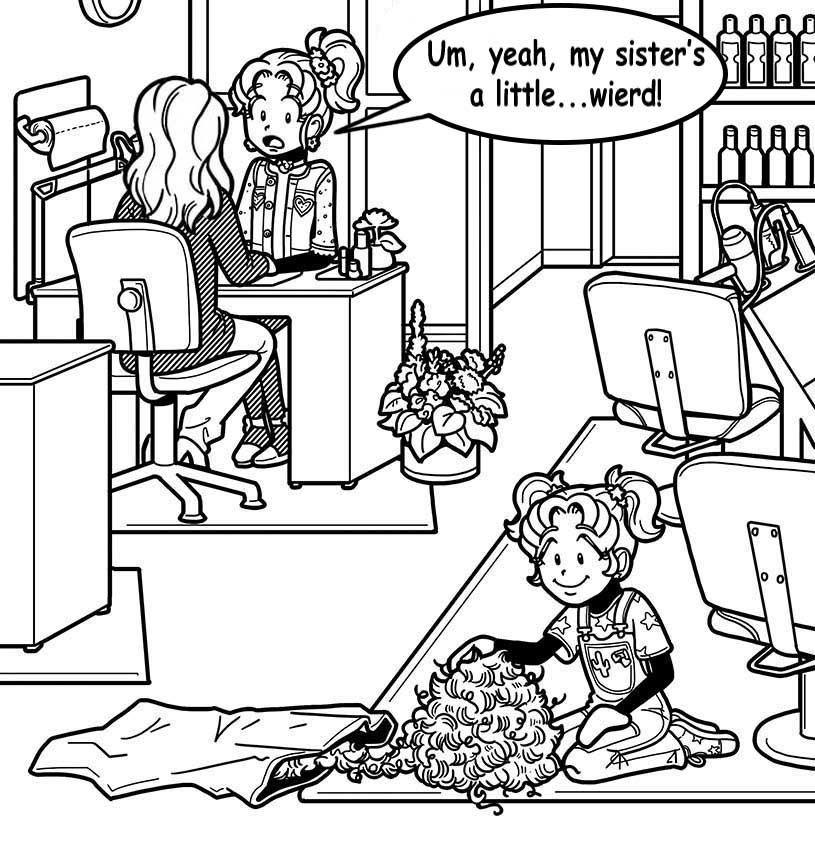 When Grandma Maxwell said she wanted to take her girls for a day at the salon, I THOUGHT it would be relaxing. Boy, was I wrong! 🙁

I mean, I should have known. BRIANNA was invited. But Grandma Maxwell AND my mom were going to be there. I figured there would be enough adult eyes on the little terror. NOT!!

We got to the salon and Grandma Maxwell told us we could each pick out anything we wanted. My mom said she wanted a massage. I wanted a manicure. Brianna wanted her hair cut. And Grandma Maxwell apparently wanted to sit and gab with all her retirement home friends who were sitting under those giant hair dryer thingies.

So, okay. A salon lady took Mom off to a little room in the back for her massage. I picked out my color (Watermelon Sunrise, which…makes no sense. But it was SUPER pretty!), and I sat down at a manicure table in the middle of the salon. Grandma Maxwell called Brianna over to meet her gal pals.

I was soaking my fingers in soapy water when another salon lady got Brianna and led her to one of the chairs for a haircut. I was a little worried. What if Brianna asked for a shaved head or something? And Mom wasn’t around to say no?! I wasn’t close enough to hear what Brianna and the lady were saying, but I had a clear view.

Brianna looked SUPER excited about the chair that went up and down. The stylist even spun her around a few times. I relaxed and let the manicure lady apply the first coat of polish to my nails.

The nail lady started asking me questions, so I stopped watching Brianna for a couple minutes. And then I heard a scream. A Brianna scream!

I whirled around in my chair and felt the nail polish brush smear across my hand. Brianna’s stylist was standing back with her hands up in the air, gripping her scissors. Brianna was leaping out of the chair while wearing that big cape they put on you to protect you from stray hairs. She looked like some kind of deranged superhero.

“Her HAIR!” the stylist insisted. “I was just cutting her HAIR!”

“Why would you cut my hair?” Brianna screamed. She grabbed a pair of scissors. “Do you want me to cut YOUR hair?”

I jumped up, even though my nail lady was freaking out about smudging my polish. What did it matter? I already had Watermelon Sunrise all over my hand! And there were WAY more important things going on!!

“Brianna,” I cornered her and threw a glance at Grandma Maxwell. She was gabbing away, NO idea what was happening at our end of the salon. “Give me the scissors!”

Brianna dropped the scissors and put her hands on her hips. I lunged for the scissors. “I did not,” she said. “I said I wanted cut hair.”

“What does that even mean?”

Behind me, the stylist scurried away, like she was afraid Brianna would get her hands on another pair of scissors.

Brianna gestured at all the hair on the floor. Like, the hair that had already been cut off of people’s heads. “Cut hair!” She got down on her knees and started scooping up armfuls of it. “I want cut hair!”

I had all sorts of reasons why it wasn’t a good idea to scoop up other people’s hair off the floor, and questions about WHY she wanted it. But knowing Brianna, she had plans I wouldn’t understand even if she explained them. And you know what? She wasn’t going to be hurting anyone.

So I grabbed a trash bag off a custodial cart and gave it to her. “Here. Knock yourself out. But NO MORE SCISSORS.”

She nodded and went to work. I returned to my nail lady, who’d been watching the whole thing like it was her favorite reality TV show. The next time I heard a scream, it was my mom. She returned from her massage to find Brianna playing with a giant bag full of human hair.

But hey, it could have been a lot worse. She wasn’t threatening anyone with scissors anymore!

Grandma Maxwell was the only one completely untraumatized by our day at the spa.

“Let’s do this again soon, girls!” she said as we headed to the car.

Brianna looked wistfully back at the shop, where my mom had made her leave the bag of hair. “I’ll come back with you, Grandma Maxwell!”

This day at the salon made me SO STRESSED that I need a REALLY long nap to get over it!! 🙁

What’s the wackiest thing your friend or family member has ever done in a public place? I’m dying to hear the wacky details!