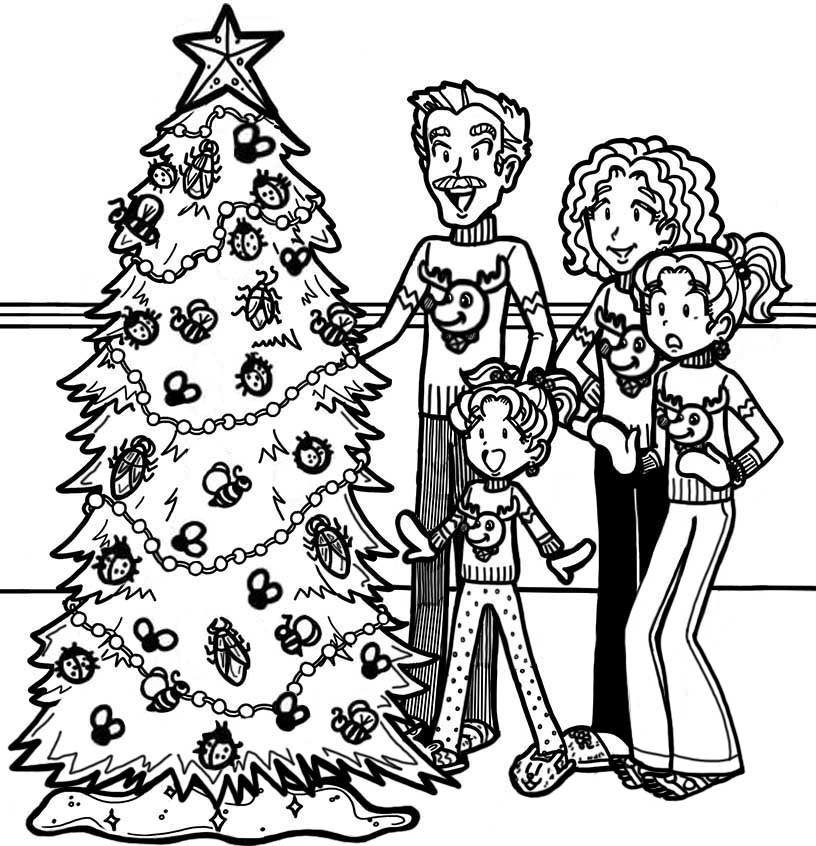 It’s official: we have the most ridiculous Christmas tree ever! I’m not inviting ANYONE over to hang out until January because this thing is TOTALLY hideous!

I suppose I should back up a bit to tell you the full story.

This past weekend, I was decorating the tree with Mom, Dad, and Brianna, and we were all having an awesome time.

We had Christmas music on, we were all wearing dorky holiday sweaters (because I come from a LONG LINE of dorks!), and we were munching on these super yummy holiday cookies my mom made.

But since this is my crazy family we’re talking about, it was only a matter of time before the Maxwell house became DRAMA CENTRAL!

My dad had this totally weird idea to make a tree that “really represents us!”

And apparently he thinks “we” are all about bugs.

So he pulled out a big old box full of BUG decorations, and said, “Let’s use ONLY these ones this year!”

Since my mom ISN’T a total weirdo, she DIDN’T say, “Great idea, honey! Hand me that beetle!”

Instead, she said, “Great idea, honey…not!” (Because she doesn’t realize that joke stopped being funny when I was still in diapers.) And then she said, “You’re joking, right?”

My dad had this super sad look on his face. Obviously, he so WASN’T joking and was totally bummed about this. He was all, “I’m serious! I spent good money on these! I had to have them custom made!”

Then my mom asked, “Exactly how much did you spend??”

And he didn’t really help his cause when he added, “But these babies will last a lifetime!”

I screamed, “Yeah, a lifetime of FREAKING OUT all our holiday guests with our big old butt ugly bug tree!” But I said it in my head so no one heard it but me!

My mom was TOTALLY annoyed that my dad spent so much money, without even asking her, and right around Christmas!

She doesn’t like to yell in front of us because she thinks every loud fight is a future therapy bill she’ll have to pay.

So instead, she said, in a really slow, calculating voice, “Honey, put them back in the box. Those things are going back.”

Then HE said, “I don’t ask for much. And I love these bugs. I LOVE them! Just humor me, okay? We’ll only use some of them, okay?”

It was only a matter of minutes before the two of them were in a FULL ON tug of war with that box!

Brianna grabbed the popcorn garland off the tree and started eating it…like their childish fight was some Blockbuster movie and she had front row seats.

And I just stood there with my mouth open, SHOCKED to see my parents acting like that!

Finally, after a good few minutes of this madness, I whistled really loudly with my fingers in my mouth and said, “Enough! It’s Christmas and you guys are acting like children!”

They both hung their heads after that, like I was their mom in the front seat and I just told them, “Don’t make me turn this car around!”

Then my mom said, “Nikki’s right. I was acting childish. You can use the bug ornaments, dear, but only on half the tree.”

But that was SO not what I meant! I meant the FIGHTING was childish! The ornaments were STILL crazy ugly, totally dumb, and SO not Christmas-like!

But it was too late at that point. They kissed and made up, and then we decorated HALF the tree with bugs. That tree is TOTALLY hideous!

Did you guys decorate your trees yet? And are they a lot less ugly than mine?