MY TRAUMATIZING TRIP TO MY MOM’S GYM 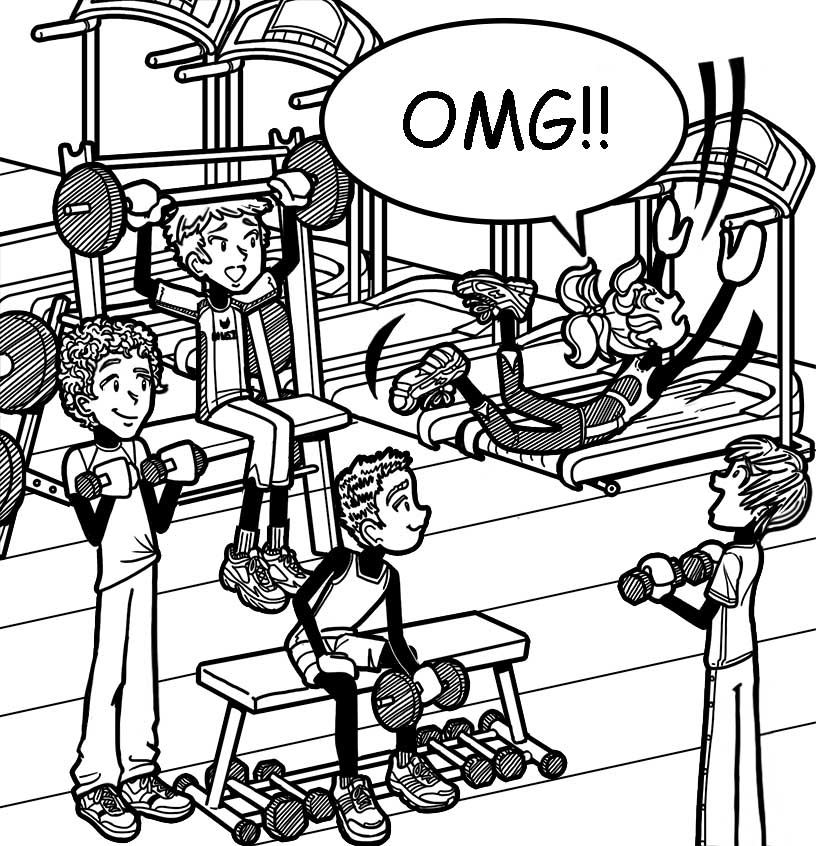 You know how my mom has been taking this spin class at the gym with MacKenzie’s mom? (In case you don’t know, it’s this intense exercise class involving stationary bikes.)

She’s kind of obsessed with it, and I have NO IDEA why.

It sounds like the teacher’s a nasty bike bully. My mom said she screams, “Pedal faster, fatsos! Those butts won’t work off themselves!!”

And according to Mom, “it’s super motivating,” but it sounds super PSYCHO to me!

Anyway, she’s been trying to get me to go with her because she thinks it would be good for me to “start a fitness routine now, so I’ll have good habits to take into adulthood.”

(I think I already have a good fitness routine, but she said running to get my phone whenever Brandon calls doesn’t count!)

I was SO not into going to this class with her. For one thing, I’m way too young to ride a bike that isn’t taking me to the mall, the movies, or a friend’s house.

But also, MacKenzie’s mom takes that class! I DEFINITELY didn’t want to get into an awkward conversation like this:

“So, I heard my darling daughter bought you some new art supplies!”

“Um, yeah, she wasn’t wretched and evil for all of two seconds. You must be so proud!”

But my mom didn’t listen when I said I REALLY didn’t want to go, and she tricked me into going anyways!

This Saturday, she was all, “Let’s have a mother-daughter brunch today! We can go WHEREVER you want!”

Then she said, “And I have a gift for you!” After I opened the box and saw it was a super cute purple tracksuit, she said, “I bet that will look great on you!”

I should have known something was fishy right then, but she was right…it DID look great on me, so I didn’t think twice!

Ten minutes later, we were pulling up in front of the gym, so I said, “Um, last I heard they don’t serve pancakes here, so what’s up?”

Then she responded, “It’s just an hour class! You’ll love it! And we’ll REALLY love our brunch after this!”

Not only was I SO not interested in this class, I also didn’t want to exercise and then gross everyone out in a restaurant.

The last thing someone wants to see when they’re waiting for their eggs is a big, sweaty, smelly mess at the table across from them!

Still, my mom decided she was taking this class no matter what, so I’d have to entertain myself for an hour.

I decided to walk on a treadmill for a bit, since they had a TV playing Phineas and Ferb right in front it.

But I only watched the show for about five minutes because I saw this group of super cute boys lifting weights.

They were NOWHERE near as cute as Brandon, but it seemed like they were all looking at me, and I was TOTALLY flattered!

I didn’t want to look like a loser walking super slowly, so I started hitting some buttons on the machine, and before I knew it, it was going WAY too fast.

I tried to keep up, but I couldn’t, and when I hit the buttons again, it got even faster!

And then it happened: I fell right off! OMG, I was SO embarrassed!!

The guy who runs the gym came over and asked, “Little girl, are you alright?”

LITTLE GIRL?!? I’m SO not a little girl!

Then, he interrupted the spin class and said, “Mrs. Maxwell, your daughter fell off the treadmill, and I think she needs her mommy.”

I just KNOW this is going to get back to MacKenzie, and soon the WHOLE school will know about it! You think?!