My sister’s such a KNOW-IT-All 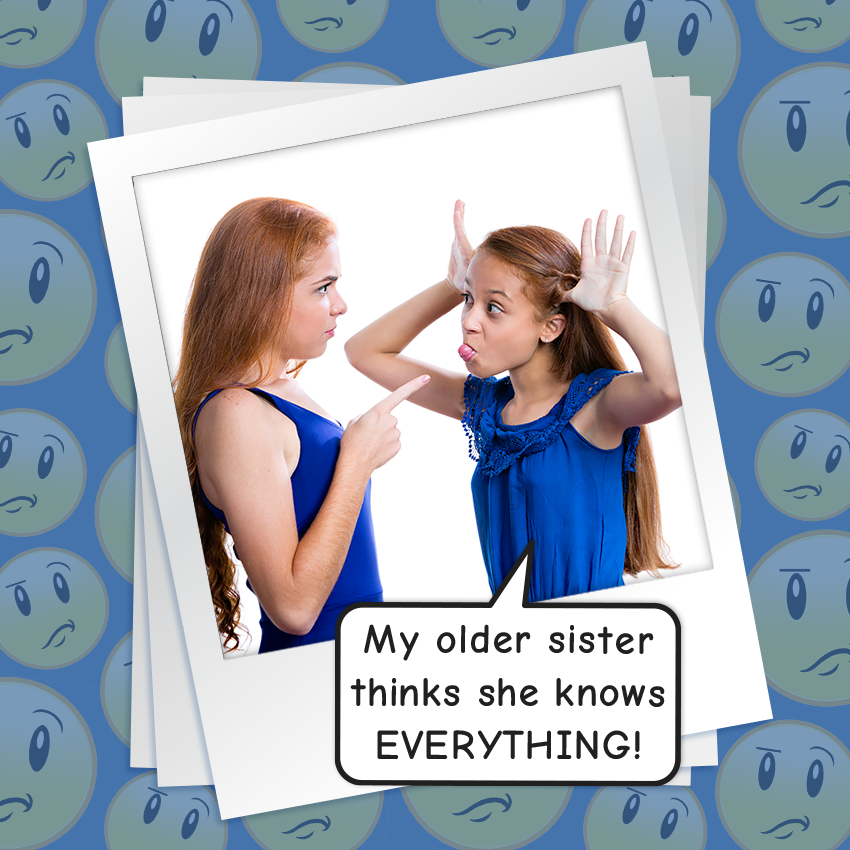 Ugh! My sister is the BIGGEST know-it-all and it’s the most ANNOYING thing in the world!!! She’s only ONE year older than me and she acts like she’s my second mom!!! I’m starting middle school next year and she’s acting like some kind of middle school expert, telling me all the things I don’t know and I’m not ready for! Even with stuff I know more about, like Minecraft, she tries to tell me what to do in my world! How do I get her to zip her lip and stop?!?!

What’s Up Bothered By Bossy Sister,

That DOES sound super annoying.

I have to admit I don’t have personal experience, since I don’t have siblings. So, I talked to Nikki and Chloe since they do. But they were both like, “Yeah, the thing about little siblings is that they DON’T know anything and need us to tell them what to do.” So…LOL…I guess that’s what I get for asking two older sisters.

Now, I have dealt with some know-it-alls before. (And I’m sure living with them is a LOT worse.) Here’s what I think: most know-it-alls are actually sort of insecure and they’re trying to build themselves up by showing how much more they (supposedly) know than you. Even if you’re thinking, “LOL! NO, my older sister definitely thinks she’s the most brilliant human to ever walk the earth,” that might be true on some topics. But I promise there are some things she just doesn’t know.

There’s also the possibility that she’s honestly trying to help. That doesn’t make it any less annoying, but in the case of something like middle school, she might actually be hoping you’ll learn from lessons she learned the hard way.

Since a know-it-all wants to feel important, you might try asking for advice or help with something that you honestly do need help/advice on. Having an older sibling should have its uses, after all. It might seem like that would encourage her to blab even more, but maybe it’ll give her a chance to use up that know-it-all energy and leave things like your Minecraft world alone!

But maybe keep an open mind for the possibility that they’ll occasionally have good advice too.

Do you have know-it-all siblings or other know-it-alls in your life? How do you handle it? Tell us in the comments.