MY SISTER COPIES EVERYTHING I DO!!!! 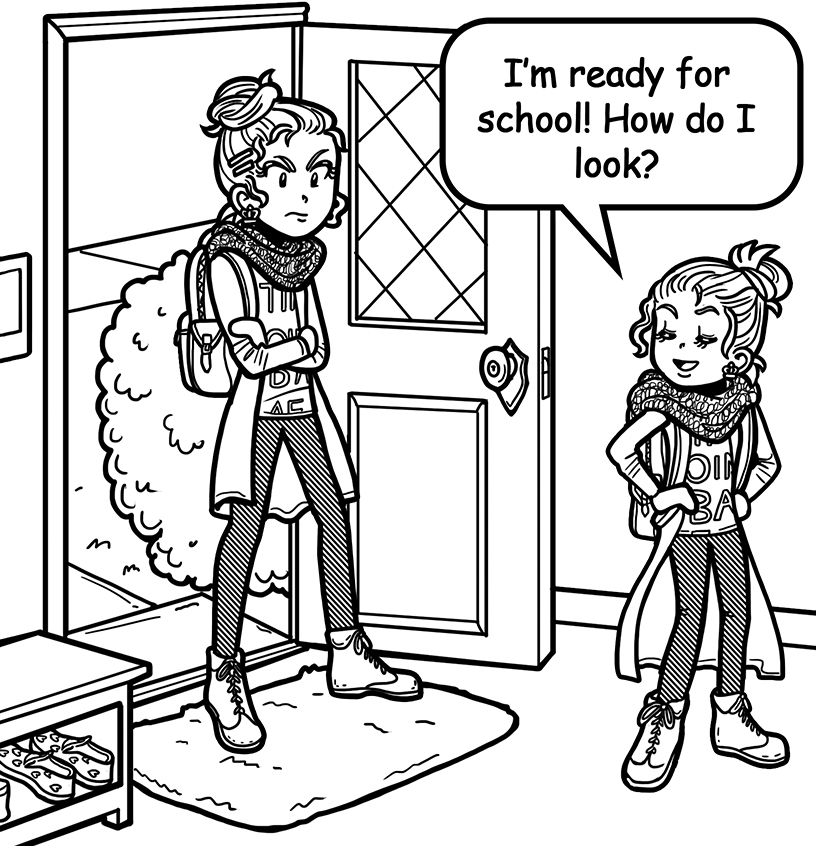 Ok Nikki, maybe you can help me. I have a sister who’s a few years younger than me, and she copies EVERYTHING I DO. Sometimes it’s fun, but a lot of times she just steals ALL the attention. And, we have to share almost everything. My birthday is coming up and my parents told me I’m getting my VERY FIRST cell phone! I’m really excited but I know I’ll have to share it with my sister a lot, too !!

How can I be original if she’s ALWAYS copying me?

Oh boy, I can definitely relate to annoying little sisters!!!

Unlike your little sister, Brianna is eight years younger than I am. It sometimes seems like she’s MOST annoying because she’s so little. However, I can kind of imagine that having a sister who’s only a few years younger could be even worse. At least Brianna doesn’t want to borrow my clothes, cell phone, or anything like that.

I’m sure your parents have told you something like, “Imitation is the sincerest form of flattery.” Meaning: she’s only copying you because she admires you, thinks you’re great and wants to be like you. So…you should be flattered. At least according to parental wisdom.

And like, that’s true! But it doesn’t make it any less ANNOYING. I totally get that.

Now…there’s not really anything you can do to change HER behavior. And, if she’s anything like Brianna, making a big deal out of it will probably actually make it worse. So all you can control is how you react when she’s copying you/hogging the attention/stealing your stuff.

You could be super-mad and annoyed all the time. That’s understandable. But…it doesn’t feel great. It’s no fun to be angry. So it might be best—for YOU—to figure out how to not let it bother you. Maybe you could find it amusing, or you could be flattered, or you could just know that it’s probably temporary. Like, you’ll always be her big sister, and maybe she’ll always look up to you, but hopefully as you guys get older, she’ll be less obvious in the way she expresses it.

Here’s a way to think about the attention thing: sometimes there’s an advantage to parents focusing on a different kid. It can mean they’re not always paying attention when you mess up . But, if that part of things is really bothering you, I think you should talk to your parents. Ask them if there’s a way you could arrange some one-on-one time with them. Make it clear that you’d like some more time to connect with them.

As for being original when she’s always doing the same thing…look, if she’s the one copying you, SHE’S the one who’s unoriginal. This might be kind of bummer advice, but I think that after a while, she’ll get bored with doing everything you do and she’ll start wanting to do things her own way.

So okay, let’s talk about the cell phone. I remember how long I waited for my first phone and how thrilled I was to FINALLY get it. It would have been a HUGE bummer if I’d had to share it with Brianna.

But it sounds like you’re prepared for this possibility. So the good news is, you can make a plan for how to handle that. Maybe you could have a family meeting where you express that you understand she’s going to want to use the phone sometimes (and be honest: if you were the little sister, you’d want big sis to share her new phone, right?), but since it will be YOUR phone, you want to make some guidelines.

With guidelines in place, hopefully the phone won’t cause too much conflict. And maybe if you guys show how peaceful and responsible you can be with one phone, your parents will get your sister her own phone before too long.

Being the older sister can be tough. Here’s a cool thing, though—you’re not alone!

Who else is an older sibling? How do you handle it when your little siblings copy you or expect you to share your stuff?