I’M THE ONLY GIRL ON THE FOOTBALL TEAM!! 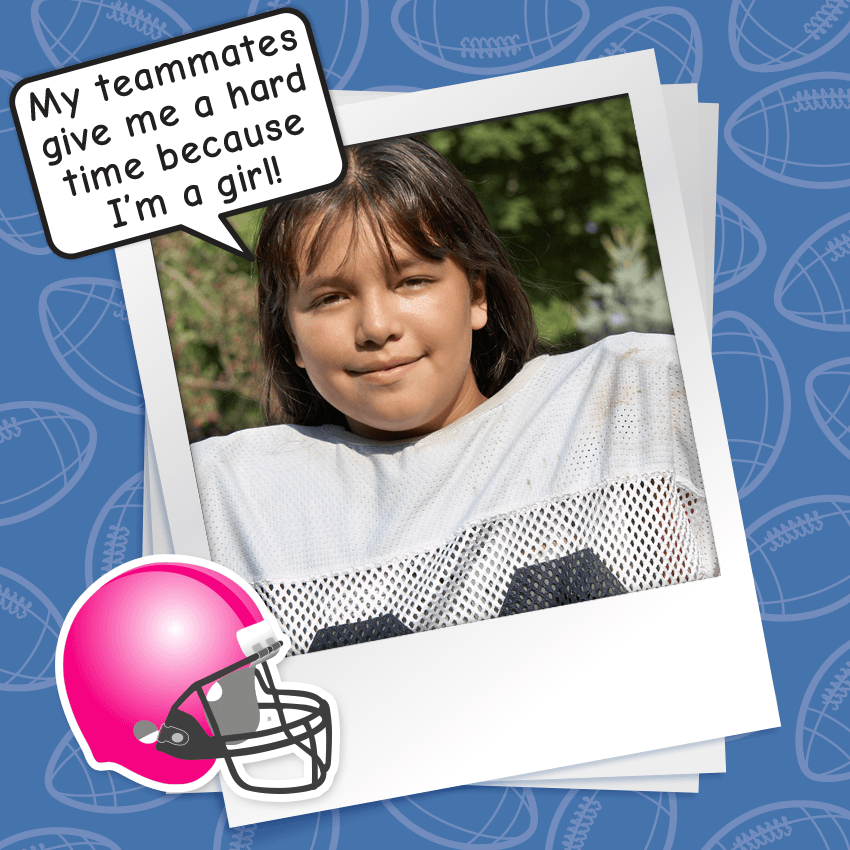 Hey Brandon,
I’ve been training with my school’s football team, and it’s a lot of fun. The only thing is that the guys all underestimate me because I’m a GIRL. Even though I can beat almost all of them in our half mile warm up and keep up in weight training, they still don’t take me seriously! What’s up with that? And, what should I do?

UGH. I’m sorry you’re dealing with these losers when you are clearly superior to ALL of them!

“What’s up with that?” is the easy part of your question. It’s sexism. Some of them might not even think they’re sexist. They might respect their female friends and teachers, and believe women can be astronauts, surgeons and president.

But…put them on a football field and something changes. (This is NOT excusing them, by the way.) You’re kind of a trailblazer, as a girl on your school football team. I mean, you’re not the first, but it’s not common either. I’m guessing you’re the only girl on your team, right? (And if not, have you vented about this with your female teammate?)

So, it looks like the guys are not USED to having a girl on the team. (Again, not an excuse. Unless you’ve been playing with them since Pop Warner, in which case they’re just being idiots.) And, sometimes people resist things that are new or different.

Size is also really important in football. And as a girl, you’re probably physically smaller than most of the guys on the team. Which only means you’re working harder than anyone to be there, but some guys might look at you and think your size means you’re not up to the challenge. Some of them might think you’ll be a weak link on the team; some might think you need protecting. Either way, they’re being sexist.

The tougher part of your question is, “What should I do?”

I mean, I’ve got to be honest. I’ve never been in your position. And not just because I don’t play football! Honestly, as a white guy, I never face the kind of prejudice some people have to deal with all the time. It’s not fair. If I were on the team, it would definitely be my role to call out stupid comments and behavior when I saw it. It shouldn’t have to be your responsibility.

So, I guess…if you have any guy friends on the team who appreciate your abilities and realize how much you deserve to be on the team, maybe give them a heads-up that you’d appreciate their support when this stuff happens.

But maybe you don’t want to rely on a guy to handle it. Which would make sense. In that case, I think sarcasm and snark are your friends. When they make crap comments, you’re ready with a comment that’ll cut them down to size and remind them how much harder you work. And above all, try not to let it bother you. When you hear that stuff, vow to fight even harder and show them why you deserve to be there. You shouldn’t HAVE to prove yourself any more than they do, but until girls on football teams are more common, hold your head up high and keep on blazing that trail.

Whether or not those guys appreciate you, YOU ROCK. And little girls are going to come to your football games and see you out there killing it, and they’re going to realize they can play football on the school team if they want to, too. And that’s how it will become more common!

So, keep crushing your weight training, warm-ups and games, and never let those guys make you doubt yourself. You’ve definitely inspired me! 🙂

Are you the only girl on an all-guy team, or the only guy on an all-girl team? Do your teammates respect you? How do you handle it when they don’t?