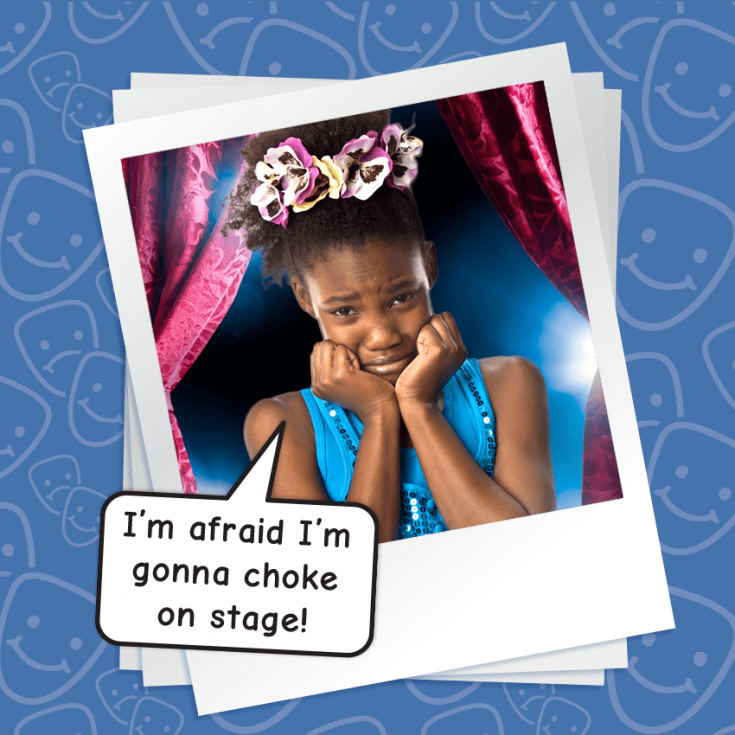 Every year, our school puts on a huge spring production with acting, singing, and dancing. All of my friends told me that I’m super talented, so I tried out and got the lead part.

I’ve never performed in front of an audience before but I figured, how hard could it be, right? WRONG!!!

During dress rehearsals I got super scared, totally forgot my lines, screwed up the dance, and now everyone is saying I’m going to choke and ruin the show. I’m really afraid and don’t know what to do. HELP!

I’m sorry to hear about your dress rehearsal. I can see why that would kind of freak you out.

It’s hard enough to feel like you messed up without everyone predicting total failure.

But that’s the thing – they’re making predictions. Unless they’re carrying crystal balls in their backpacks, they don’t actually know the future. Nobody does!

Just because you forgot your lines and choreography during dress rehearsal, that doesn’t mean the same thing will happen on opening night.

Remember what your friends told you before: you’re super talented! It’s just that this is new to you.

And that’s what dress rehearsals are for. They give you a chance to practice so you can get used to doing the show in costume.

What you really need now is to get your confidence back – then you’ll feel pumped instead of scared.

Maybe you could run lines and practice the dances in front of your family and a few of your friends. That way, you’ll get used to performing in front of an audience. And because they’re your friends and family, they’ll remind you that you’re awesome –and that you got this.

Then, before the show, you should do something to help yourself relax.

Before I went onstage to drum with my band, “Actually, I’m Not Really Sure Yet,” I did some jumping jacks to get rid of my nervous energy. Then, I took a few deep breaths while stretching so my heart wouldn’t feel like a jackhammer trying to break through my chest.

I probably looked like a total weirdo, but so what? After that, I nailed it!

If you don’t let the mean kids get inside your head, I’m sure you’ll nail it too. And if you don’t, try not to sweat it. I’ve bombed a couple times, but I always have fun with my friends, and that’s the most important thing.