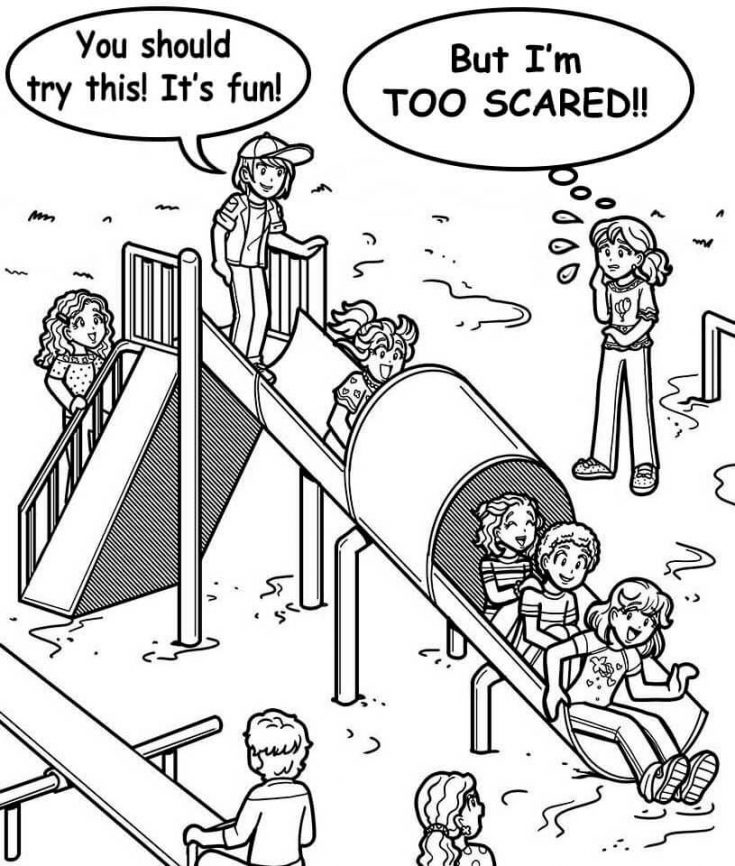 I’m claustrophobic, which means I’m afraid of small, enclosed spaces like inside a closet. So, obviously I HATE the tube slides at school. But this year the new thing at recess is this game called, “Clog The Slide.” It’s when someone goes to the bottom of the slide and clogs it. Then people keep sliding down and stack on each other INSIDE THE TUBE. This sounds like my WORST NIGHTMARE!!! But my friends are super into it and think it’s really fun! All they want to do is play “Clog The Slide.” I’m too scared to do it, but they’ll think I’m a baby if I say so, and also now I have nothing to do at recess! Help!!!

I remember “Clog The Slide!” That was SO FUN! But if you’re scared of small, enclosed spaces, it would definitely NOT be fun for you! Especially if you’re one of the people stuck in the middle! 🙁

Although…if you want to try to be a part of things, you could probably handle being the FIRST person, couldn’t you? Because then you’d just be hanging out at the bottom, which is open. So that’s a thought! 🙂

But, I’m going to assume you don’t want to try it AT ALL. And that’s okay! We all have things we’re scared of. Sometimes it’s good to try to do them anyway and get over the fear. If you’ve got to give a report in front of the class but you’re afraid of public speaking…well, you have to figure out how to do that, not just for that assignment, but because there will be more times you will have to speak in public and it’s an important life skill.

Playing clog the slide is not an important life skill. LOL! And recess is supposed to be fun. So I don’t think there’s any reason you should force yourself to do it.

Let’s start with the baby thing. This is one of those things where how YOU act determines what they’ll think. If you’re whiney about it, and make a big deal about how scared you are, they might think you’re a baby. But if you’re confident in telling them you just don’t want to do it, you won’t seem like a baby. You’ll just seem like someone who knows what she wants and stands up for herself. Which is really very mature. If they ask WHY, tell them confidently that you really don’t like enclosed spaces. Make it seem like it’s not a big deal.

As for being bored…I mean, you don’t want to be a party pooper and try to make your friends stop doing something they’re enjoying. It’s your choice not to play. So I think you might just have to deal. That might mean sitting and watching. Maybe you could find a way to be involved, like counting how many people get inside, timing how long it takes them to get out, or whatever. Maybe it means finding something else to do.

But one thing to keep in mind: this is not going to be all anyone plays all school year long. It’s just the trendy thing right now. They might be over it by next week. For sure by next month. So, hang in there!

And next month, when everyone is into something different that you like, maybe be on the lookout for someone who doesn’t like that thing and see if there’s a way you can include them too!

Have you ever been afraid or just not interested in the latest fad your friends were into? How did you handle it? Tell us in the comments below!