HOW DO I KEEP A REALLY BIG SECRET?!?! 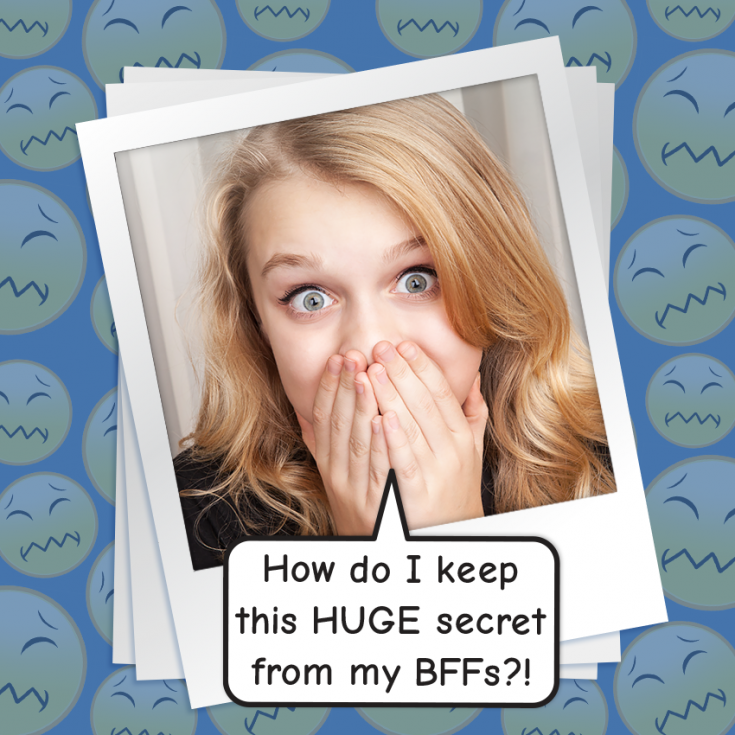 Can you give a girl advice? My best friends have a crush…on the same guy! They both want me to keep it a secret, and I’ve been going CRAZY trying to hide it from them; they don’t know that they’re actually competing with each other! And the guy they’re crushing on isn’t even that great! A little help would be nice. Thanks!
So Sick Of Secrets

Hey So Sick Of Secrets,

Oh man, you are in a sticky situation!

It’s cool when someone trusts you with a secret, but sometimes keeping that secret is tough. And if you have to hide it from someone you care about, that’s even more tough!

The trouble is, there’s really no way for you to tell the truth without betraying your BFFs. I guess maybe you could encourage them to talk to each other about their crushes? Or just say you don’t want to talk about crushes anymore.

However, if that doesn’t work or they don’t want to tell anyone but you, you might have to put up with it for a while. Because being a trustworthy friend is important. You’d want them to keep your secrets, after all. And if you blab their secret this time, they’re not going to trust you the next time they have something super secretive they want to talk about.

I mean, there are SOME times when you shouldn’t keep secrets. If you know somebody is in trouble, or is going to hurt themselves or someone else, you shouldn’t keep that a secret. You should tell a trusted adult, like a parent or a school counselor!

That’s not what’s going on in your situation. I just didn’t want to make it sound like, to be a good friend, you have to keep ALL secrets. Because there are some times when being a good friend means spilling the beans, or telling the secret.

I have to admit, I LOL’d when you said he’s not even that great.

Isn’t it funny how different tastes can be? I might love a book or movie that you thought was SUPER boring, and the same can be true for attraction to people.

But it sounds like your BFFs both have the same taste in crushes, even if you don’t see what they see in this guy. Hopefully sooner than later one or both of them will move on and then you won’t have to be the secret keeper. But until then…hang in there. You’re a really good friend!

Have you ever kept an uncomfortable secret? How do you keep from spilling the beans? Tell us in the comments!