HELP! HOW DO I HELP SOMEONE BEING BULLIED?! 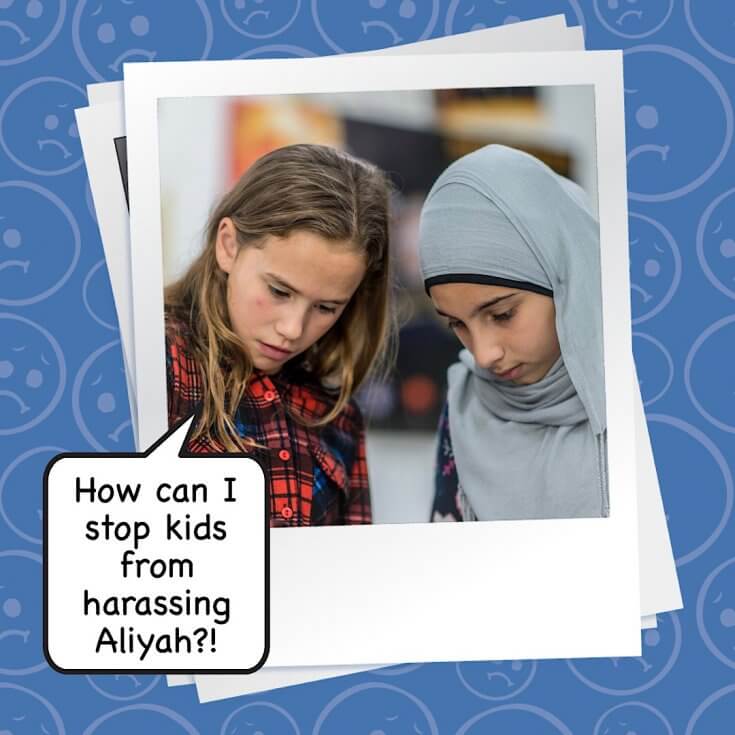 There’s a girl at my school who’s Muslim and wears a hijab (like a head scarf). Other kids think it’s funny, so they tease her and try to snatch it off her head. Not only is it just plain rude, but she keeps it on for religious reasons. I want to help her, but what should I do?

Okay. To help me answer this question, I talked to this lady named Aafiyah, an awesome photographer who teaches photography workshops at the community center. She wears a hijab, and she talked to me a little bit about what it means, how she’d feel in this situation, and how a non-Muslim should respond.

So like you said, Muslim women wear the hijab for religious and cultural reasons. Their scriptures and ancient texts instruct women to cover their heads when they are around men who are not family members. So basically, any time they are out in public. Just like there are different sorts of Christians, there are different sorts of Muslims, and how they interpret these scriptures can vary. So some might wear a scarf that loosely covers their head, but wear modern clothes. Some wear a turban. Some cover almost everything except their eyes. (And some don’t wear a hijab at all, but are still Muslims. It’s a personal decision.)

Aafiyah also pointed out that there are some forms of Christianity and Judaism where the women keep their heads covered. I didn’t realize that.

So what does this have to do with what you asked? Well I figure people have a hard time with stuff they don’t understand. So I thought it might help people to understand a bit about WHY they might see girls at school wearing hijab. (And most start to wear it around when puberty hits, so you might see girls you knew in elementary school start to wear a hijab in middle school.)

You said kids at school are trying to pull off this girl’s hijab. When I talked to Aafiyah about that, she got really upset. She said that isn’t just something kids do—racists will attack grown Muslim women in the same way. And it IS an attack. Kids might act like it’s “funny” but it’s a form of bullying as serious as any other physical attacks. In fact, to a Muslim woman who chooses to wear a hijab, her hair is a private part just like the ones you consider private parts. So yanking off someone’s hijab is like yanking their pants down.

So first, if you have the confidence to speak up and tell them to knock it off, that would be excellent. If you don’t, that’s okay. It’s not always a good idea to confront bullies. But here’s what you could do: When you see kids starting to bug her, ignore them, but approach her and talk to her about something totally everyday. Like, ask if she knows what the English homework is. Or tell her you like her shoes and ask where she got them. The idea is to give her something to talk to you about that’s totally boring but shows the bullies she’s not alone and therefore not such an easy target. Hopefully you guys can just walk away from the bullies together before things get bad.

And then you should tell a teacher, if she is comfortable with that. Like I said, pulling a hijab is a form of bullying, and most schools have anti-bullying policies, so they should treat it that way.
As for what you should tell HER, which is what you asked, Aafiyah says the main thing is letting her know you support her and you’re sorry this is happening, and you want to be her friend, not because you feel sorry for her, but because she’s an interesting, good person, and because the way people are treating her is not cool. And then ask her if there’s anything she needs from you.

I think it’s great that you’re noticing this as a problem. Now I want to encourage you to go a step further and try to help the other kids at your school realize this is NOT okay, AND help this girl know she is not alone.

Have you ever stood up for someone who’s being bullied? How did it go? Is there anything you would do differently? Or if you’ve been bullied, what do you wish bystanders would do to help? Tell us in the comments!