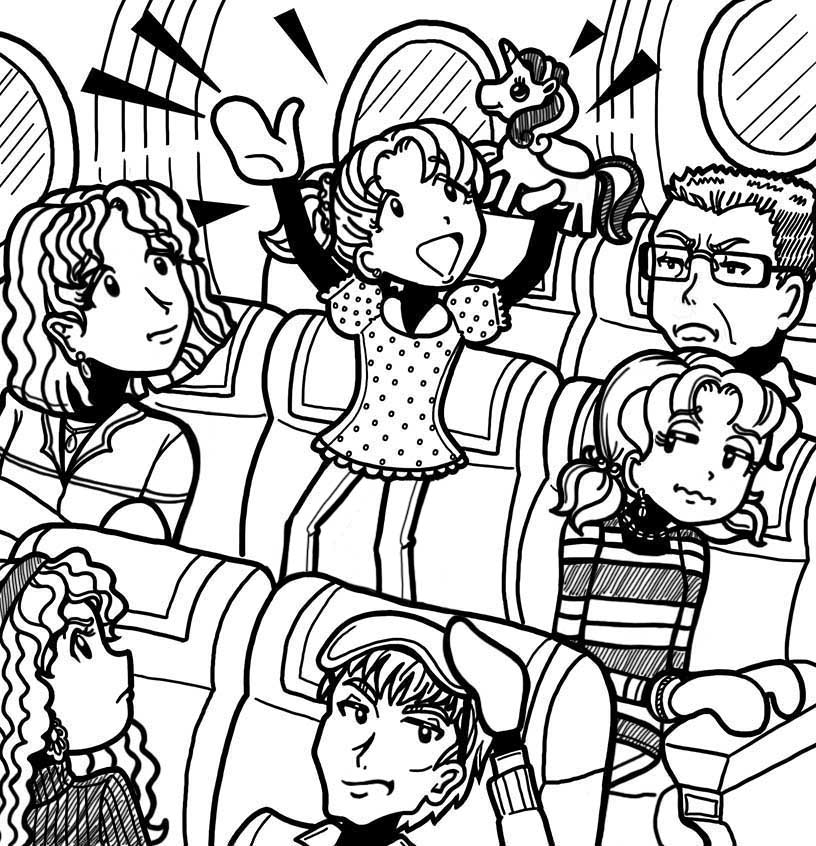 OMG, I am NEVER flying with Brianna again!

This weekend, my family took an hour-long flight to visit our Uncle Kirby (who’s not REALLY our uncle…just my dad’s weirdo exterminator friend who thinks it’s hysterical that if he’s an uncle, he’ll eventually marry our “ant”).

I’ve been on a couple of flights before, but this was Brianna’s first one, and it was a NIGHTMARE.

It all started at the airport. Even though my mom bought her this little Princess Sugar Plum rolling suitcase that she could easily pull herself, she kept whining for me to pull it for her.

I must have said no about 15 times before I snapped.

I said, “Did you see a mint on your pillow this morning? Or a napkin on the kitchen table that was folded like a swan? No? That’s because I’m NOT your maid! Do it yourself!”

Then she had a TOTAL meltdown.

She kept whining, “Nikki won’t help me! She’s being SO rude and selfish!”

Mom believed her, like she always does, so she turned to me and said, “Help your sister, Nikki, or you DEFINITELY won’t get that Hello Kitty piggy bank you asked for!”

OK, so I DID ask for a Hello Kitty piggy bank. It’s cute, and I’m a savvy saver! But I didn’t need the whole dang airport to know that!

After we got our boarding passes, we had to wait at the gate for a while. I started playing Candy Crush, so OF COURSE Brianna wanted to play, too.

She kept trying to pull my phone out of my hands, and she has a freakishly tight grip for a small kid.

Eventually, we were both standing, having a full-on tug of war. Before my parents could tell us to knock it off, I whisper-yelled, “Drop it!”

And she yelled, “Fine!” Because I had been pulling so hard, I fell backward, right into some old guy’s lap.

He chuckled and said, “What do you want for Christmas, little girl?”

OMG, it was SO embarrassing!

Brianna had drank two full chocolate milks before we got on the plane, so she was SUPER hyper, and she had to pee pretty much every 10 minutes.

And because I was sitting in the aisle seat, of course I had to take her!

She could see how totally annoyed I was, so she started asking me to take her when she didn’t even have to go.

(OK, I don’t know for a fact. It’s not like I have to help her go potty. And thank goodness for that!!)

When she asked me for the sixth time, I said, “Listen, you little brat! I don’t care if you pee your pants. I am NOT going to the bathroom for the rest of this flight!”

Then I heard a woman gasp, and turned around to see a flight attendant standing there with her mouth wide open.

She must have been at the back of the plane before, because this was the first time I saw her…meaning she had NO IDEA what Brianna had put me through.

She asked my mom, dad, and Brianna if they wanted something to drink, but when I opened my mouth to ask for a soda, she said, “Better not, dear, since you’re not going to the bathroom for the rest of this flight!”

The whole thing was just MISERABLE, and I am NEVER flying with Brianna again!