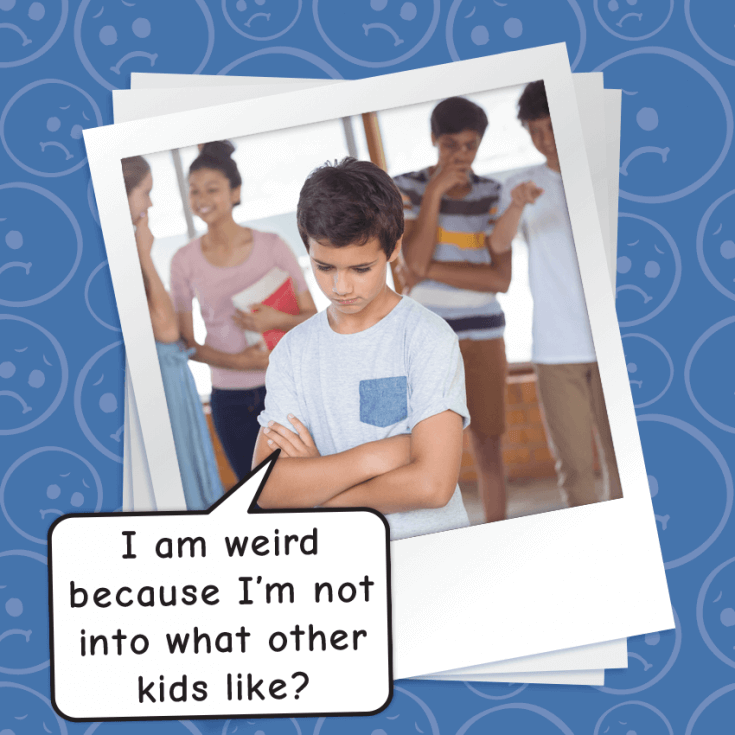 Hey Brandon,
Now that I’m in middle school, things have changed.  Everyone has crushes and are into the latest fads. They also have tablets, cell phones and all the other latest technology. I kind of feel like they’re growing up faster than I am, since I’m not really into that stuff. What should I do?

Worried That I’m A Weirdo

Hey Worried That I’m A Weirdo,

Dude.  First of all, you DO NOT have to worry because you’re definitely not a weirdo. Secondly, I think your letter is super interesting. I get lots of letters from kids who don’t have a phone but WANT one. Or who don’t have a crush, but WANT one. But it sounds like you don’t really want these things. You just want to make sure you’re normal like other kids your age.

I totally get it. When it seems like “everyone” is doing something that you’re not, it’s easy to feel like…well, a weirdo.

I think it’s important to remember first of all that NOT everyone is into the latest fad, or has the latest technology or a crush. The ones who are into that kind of thing may talk about it a lot, but I GUARANTEE you there are other kids who feel just like you do.

I don’t think they’re growing up faster than you are. You’re just interested in different things. That doesn’t mean you’re weird, immature, or whatever. And it definitely doesn’t mean you should go changing just to be like them.

It just means that you need to hang out with people who are into the same things that you are. I’m sure they’re around. You’ll feel less alone if you’ve got friends who also aren’t into crushes, the latest technology or fad.

Now, I’m not saying drop your current friends if they’re into fads, crushes and stuff. You can totally stay friends with them and have different interests. Just try to focus on the things you have in common. And you can listen when they talk about what they’re into. That’s just part of being a good friend. And if they’re good friends, they’ll let you talk about your interests too.

I don’t usually share two letters in one column, but this letter was so closely related to yours that I did.  Here it is:

Hi Brandon!
Lately, it seems like everyone is crushing on someone. Is it so wrong that I don’t even know what it’s like to have a crush, and don’t really WANT one?

So, like you, Loveless Loner isn’t into crushes. And in lots of ways, my advice to you is the same for her. But I noticed something slightly different in her letter.

Unlike someone who isn’t ready for a crush YET, she has NEVER had a crush and doesn’t WANT a crush, and wonders if it’s wrong.

Everywhere we turn, we’re slapped in the face with the never-ending message that romance is important. We hear it in music.  We also see it in books, movies and TV. Heck, since it was just Valentine’s Day, we see it all over stores, too!

Having a crush is definitely NOT the most important thing, and for some people, it’s not important at all. There ARE people who are just never into crushes. They have lots of meaningful relationships with friends and family, but crushes are just things they’re not interested in. And that’s TOTALLY OKAY.

So if that’s you, I know it’s hard not to compare yourself or wonder if you’re weird, but you’re NOT. Put your energy into whatever matters to YOU. And honestly, be glad that you’re a free spirit, because free spirits don’t worry what other people think.  Free spirits are just that:  Free to live life however they choose. 🙂

Do you ever feel like your interests don’t match up with the kids around you? How does that make you feel? Tell us in the comments!