WHAT TO DO WHEN YOU FEEL BAD ABOUT YOURSELF 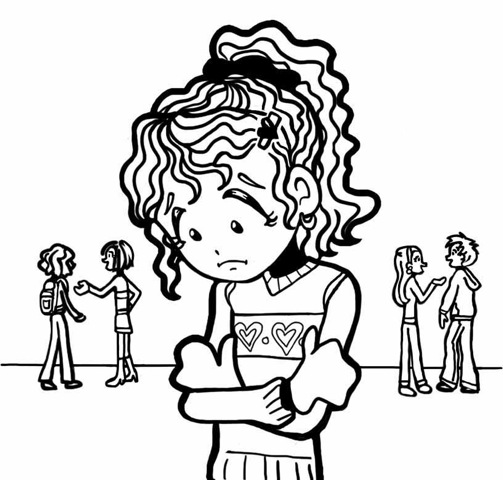 I have a hard time liking myself. Sometimes it’s like I don’t have any talents and my friends don’t like me. There’s also this guy I like who lives next door to me and we started hanging out a week ago. What should I do?

Hi Miserable Me! If we were friends off the web, I’d grab you by the shoulders, shake you a little, and say, “Girlfriend…you’re awesome, so own it!!”

But since we’re virtual buddies, let me just say I get where you’re coming from…but you don’t have to stay there!

It sounds like you’re having a confidence problem. We ALL deal with that every now and then! I felt super insecure when I first got to WCD and SOME PEOPLE started treating me like grimy gum on the bottom of a Jimmy Choo flip flop!

As for feeling bad because you don’t have any talent…maybe you do, but you just don’t know it yet.

Before I got into art, I had NO IDEA I’d be so awesome at it that people would be BEGGING me to do fake tattoos for them.

There’s probably something YOU’RE awesome at too! You just have to try new things and give yourself time to figure it out!

As for your friends, you probably think they don’t like you because YOU’RE not feeling great about yourself.

I remember this one time when I accidentally dropped Chloe’s iPod touch in the sink. (Note to self: brush teeth first and THEN listen to tunes…)

I felt so guilty about it…like I was a HORRIBLE friend! I thought for sure she was totally mad at me, but really I was the one who was mad at myself.

It’s possible it’s the same deal with your friends. Since you feel so insecure, you’re getting paranoid!

I know you mentioned that you’re talking to this guy you like, and that’s awesome! I’m so happy for you!! But I think maybe you should focus on doing stuff to feel better about yourself first.

Try some new hobbies and focus on noticing all the stuff you’re good at. Maybe you’re really good at some subject in school, or you’re an awesome listener, or you make perfect peanut butter and jelly sandwiches. (Hey, it’s an art!!)

What do you guys think? Do you have any advice for Miserable Me?