HEEELP! MY PANTS FELL DOWN!! 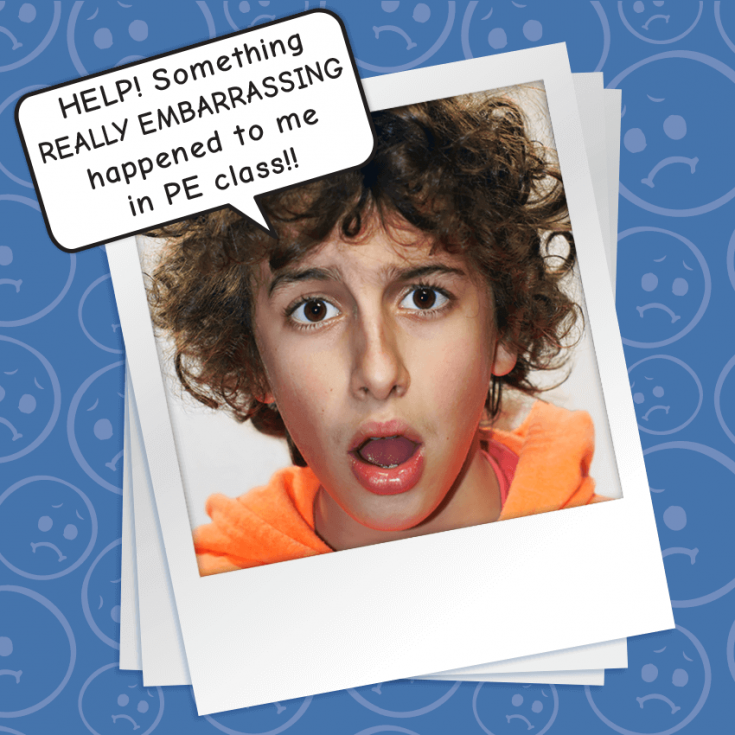 THIS IS AN EMERGENCY! HELP!! 🙁

Yesterday, all of my pants were in the wash, so I had to borrow my brother’s. During PE I was running around, and forgot my pants were a few sizes too big. Well guess what happened? My pants fell down!! Everyone saw me in my trunks, even the girls, and now this is all people are talking about. The news has gotten around the whole school! But the worst thing is that someone got a picture of me, and now they have posted it on the internet where everyone can see it! What should I do? I’m so embarrassed!! Please write back soon, I am DESPERATE!

Okay, I’m not gonna lie. This is BAD. In twenty years, it’ll be a story you laugh about when you tell your kids. But right now? This is Defcon 1 bad. (Did you know Defcon 1 is the worst? Some people think Defcon 5 is the worst, but it really goes in reverse. NOT actually the point right now, I know, but…fun fact!)

So, this is an actual nightmare many people have – suddenly being undressed in public – only it really happened to you. That would be bad enough, but to have it recorded and posted on the internet? That brings it to another level. A CYBERBULLYING level.

Sharing humiliating photos online of someone else without their permission is 100% covered by your school’s bullying policy and it’s the kind of behavior that needs to be stopped. Whether or not your school takes action (though I’d be shocked if they don’t), you can report the photo to whatever website they posted it to – Twitter, Instagram, whatever. They all have ways to report abusive content, which this definitely is.

Even if there hadn’t been photos, this would have been super embarrassing, no doubt. And I’m sure lots of people were talking about it. But in the time it’s taken me to read your letter and respond, I’m pretty sure they’ve also probably moved on to the next juicy item of gossip. We don’t have very long attention spans, which is a good thing in this situation.

If people DO keep bringing it up, the very best thing you can do is make a joke of it and act like you think it was hilarious too. I know it’ll be hard. I know you’re mortified. But if you make yourself a target, people will take aim. Find a way to laugh with them and they’re more likely to move on.

Normally I’m all about telling people to be themselves, but this is the rare case when you actually want to play a part. Imagine how the most confident, cocky guy in your school would react if this happened to him. Then try to play that part, responding to teasing with the same kind of jokes or who-cares-attitude he would.

Hey. This whole pants-falling-down fiasco could have happened to ANYONE. It’s a big deal because, for some reason, we all think that bodies are embarrassing. But believe me, it will pass.

But the photo getting shared on the internet? That’s what really bothers me. That didn’t have to happen. It’s not something just anyone would do. Please report it so there are consequences for that bully.

As for everything else, try not to let it bother you.

What do you do when something super embarrassing happens to you? Any tips for laughing it off? Tell us in the comments!