ARE BOY BOOKS BAD FOR GIRLS? 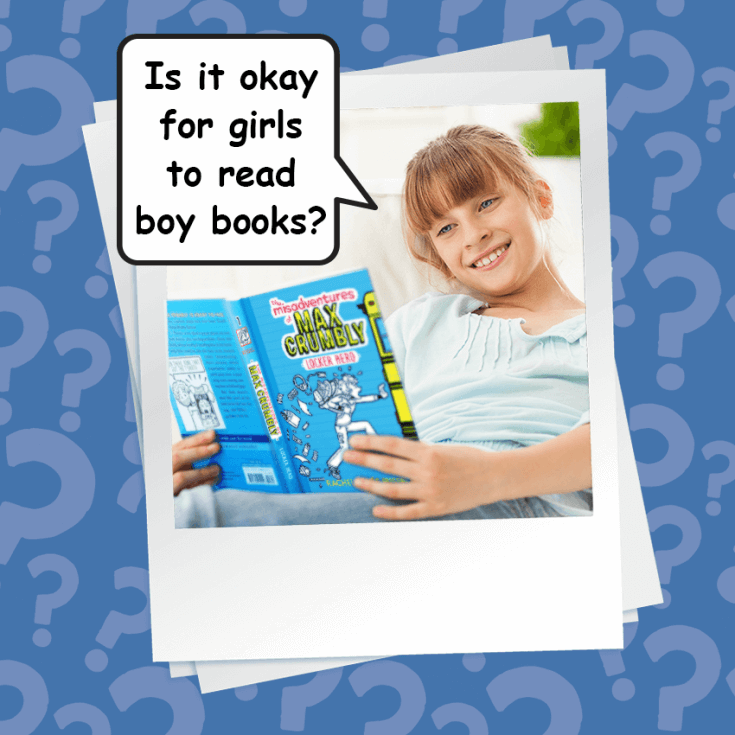 Hey Brandon. I LOVE to read. The problem is that I’m REALLY into books that are for boys, but I’m a girl. People make fun of me because of it. What should I do?

Okay, so part of this question is about liking things you’re not expected to like for whatever reason, and I get TONS of questions about that sort of thing. So, let’s address that issue in this letter.

I’m not criticizing YOU for thinking this way. AT ALL. Because this is totally how A LOT of people think. It’s what we’re taught. But let’s break it down and think about this.

Is a book “for boys” if the main character is a boy?

Well…I know an awful lot of girls who love Harry Potter. Other popular books with boy main characters include Dog Man and Diary Of A Wimpy Kid.

Is a book “for boys” if the author is male?

I’m sorry, but Escape From Mr. Lemoncello’s Library was a HUGE hit with my male and female Battle of the Books teammates last year.

Is a book “for boys” if it’s action/adventure-based?

No, no, NO! Girls like adventure and action! (See all of Rick Riordan’s books! And a new favorite of mine—The Serpent’s Secret by Sayantani Dasgupta!)

Girls like sports stories! And WOW, have you guys read Jason Reynolds’ Track series? The first and third books, Ghost and Sunny, have boy main characters. And the third and fourth, Patina and Lu have girl main characters. (Lu comes out in October.) They’re all athletes.

Potty Humor? I mean come on, Captain Underpants is classic! And the How to Train Your Dragon books are full of stuff that would make your grandma cringe! ☺

Boys deal with the same thing, feeling like they’re not supposed to read “girl books.” Nikki gets letters all the time from guys who think they’re not supposed to like Dork Diaries because the books are “for girls”. And whether that means girl main characters, or thoughtful books about friendship and feelings, or books with traditionally “girly” subjects, like dance, fashion, or unicorns, it’s all ridiculous! Books are books! People should enjoy what they enjoy!

Which leads me to the more general question of liking something other people don’t expect you to like for whatever reason – gender and age seem like big ones, but I’m guessing race and religion can also be used in similar ways to say you “should” or “shouldn’t” read something.

WHO MAKES THESE RULES?!

Let’s say boys aren’t supposed to like dance books. Okay, but what about My Seventh Grade Life in Tights? It’s written by a male author, about a boy main character who loves to dance! My brain…cannot compute…

WHO MAKES THESE RULES?!!

I guess the answer to who makes these rules is just…our society in general. And the only way to change them is to resist them and insist that we can all read and enjoy the things we want to read and enjoy simply because they’re great and for no other reason.

So how do you deal with it if other kids make fun of what you’re reading? I think the best approach is to shrug them off, like you don’t even get what their issue is. If you’re asked a direct question about why you’re reading it, you can just say, “Because it’s good.” Like, why else would anybody choose to read a book?

So, know you’re not alone! Nikki recently recommended a book to me called, Love Sugar Magic, and it’s all about this girl, her sisters, and magical baking. Some might think that—based on those things—that it’s for girls, but whatever. It rocks!