HELP!! I’m TOO NERVOUS TO ASK MY CRUSH TO JOIN MY ROCK BAND! 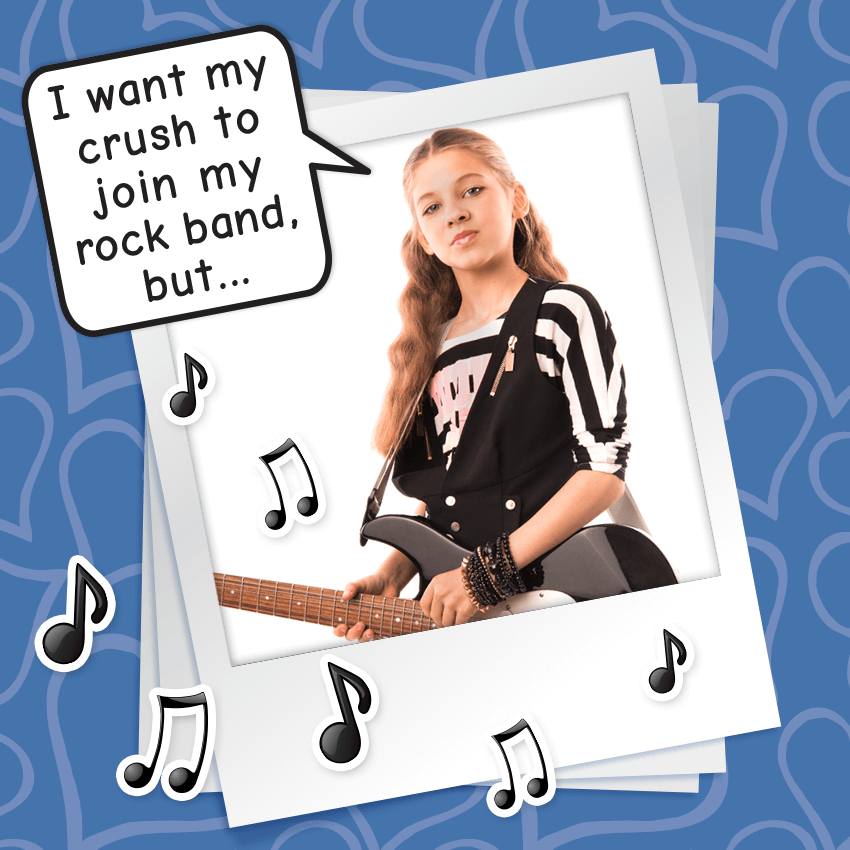 Me and my BFF started a rock band and we asked some people if they can play guitar. The only person who said they could was my crush. I wanna ask him if he’s interested in being the bass guitarist for our band, but…I dunno how to ask him! Every time I want to speak to him, I freeze up! You’re a guy—how should girls talk to the boy they like?

Hi Lovesick Love Song. First of all, SO cool that you’ve started a rock band!

I have a little bit of experience in this, having played in Nikki’s band, Dorkalicious (or Actually, I’m Not Really Sure Yet ). And I can say that being in a band together is an awesome way to hang out with a crush. You’ve got something to do, and you can always talk about the music, so there are no awkward pauses when you’re trying to think about what to say next without sounding like a complete doofus.

PLUS, the band will give you something to talk about outside of rehearsals, or reasons to call or text each other. Like, you might “need” to call to double check what time the next rehearsal is…but if you happen to stay on the phone chatting about other things, well…that’s cool.:)

So, I DEFINITELY think you should ask him to join! Especially since you already asked him if he could play guitar. Look at it this way: You asked him if he can play. He said yes. If you then choose someone else…he might think you dislike him.

Now that that’s settled, let’s talk about HOW to ask him. Now that I think about it, Nikki didn’t ask me to join the band. Theodore did. (And you should have SEEN Nikki’s face when I showed up at rehearsal!)

But, your bigger question is “how should girls talk to boys they like”, right? I mean…I think you should try to talk to them just like you’d talk to any other person you like. And I don’t just mean crush-like. I mean anyone you have positive feelings about—friends, family members, kids you look up to, that cafeteria lady who always gives you extra pudding, etc.

If you worry too much about how you sound when you’re talking to your crush or worry about whether they like you back or wonder if you have a giant piece of spinach stuck in your teeth (and believe me, I do all these things too), it’s really hard to actually be present in the conversation. Which makes it hard to connect with another person. And that’s the whole point! You want to connect with your crush, right?

A lot of people say, “Be yourself” in responses to questions like this, and I think that advice is useful AND totally worthless, in different ways. I mean, on the one hand, you don’t want to act fake, trying to be whatever you think your crush likes. Because even if your crush does like that, they’re not really liking YOU. They’re liking you-pretending-to-be-someone-else. And it would be exhausting to have to keep that up.

“Be yourself” can also be confusing because at our age, we’re all struggling to figure out who we are to begin with. How can we “be ourselves” when…we’re not sure what that looks like?! (Just like the title of Nikki’s band, “Actually, I’m Not Sure Yet.”)

But I think when people say, “Be yourself,” they mean, “Be yourself on a good day, when you’re relaxed and wearing something that makes you feel confident, and hanging out with a friend you’ve known forever and sitting around a table of your favorite foods.”

I know that’s easier said than done. But remember he’s a person just like you are, and he might be nervous too, but he’ll probably be flattered by the invitation. The worst he can do is say no.

So take a deep breath, smile, walk up to him, and say, “Hey, I know you said you can play guitar. Are you interested in being in our band?”

How do the rest of you get up the nerve to talk to your crush—girls AND guys? (Because guys definitely go through the same nerves—I can speak from experience!) What do you think of the advice, “Be yourself”?