BRIANNA IS THE WORST NURSE EVER!!! 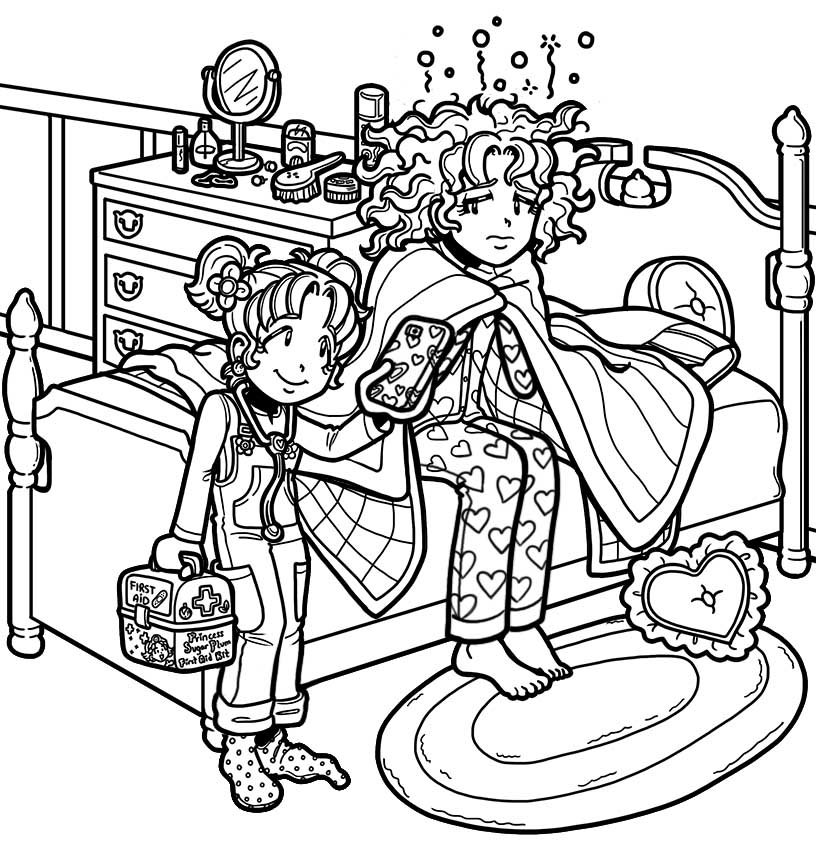 I’m pretty sure I’m going to die. I would like to leave all my art supplies to my BFF, Zoey, and all my cutest clothes to my BFF, Chloe.

I’ll even leave my phone to Brianna, since I’ll be dead anyway!

I can only write a little bit at a time before I get dizzy.

When Brianna figured out how sick I was, she came rushing into my room with her Princess Sugar Plum First Aid Kit (which, BTW, was hot pink and FAKE) and announced that Nurse Brianna had arrived. She then handed me a real thermometer to take my temperature, and I almost put it in my mouth. But then, Mom came running in the room and stopped me.

Because of the fever it took me a minute to understand what she’d just said. Brianna brought me the thermometer we use on Daisy, our dog. And, we take her temperature by sticking it IN HER BUTT!!! And I almost put it IN MY MOUTH!!!

EEEEEEEWWW!!!!!! I threw up in my mouth a little bit just thinking about it!!

But then I had a CRAZY sneezing fit. I sneezed seventeen times in a row!! I’m not even kidding!   I ran out of tissues, so I called for Mom.

Then Brianna poked her head into my room. “Nikki, are you still alive? Maybe Nurse Brianna should give you a shot!”

“She went to the store.”

“He had a work emergency.”

I blinked at her. I sneezed forty-seven more times. “She just left you here???”

“Yes,” she said, looking super proud. “In case you needed anything! And you do! Or you wouldn’t have called for Mom!”

I really did NOT want to rely on Nurse Brianna, who had tried to give me a dog-butt thermometer!!! But it was hard to imagine how she could mess this up.

She beamed and disappeared.

While she was gone, I took my sweatshirt off, put it on, and took it back off again. My body could NOT make up its mind whether it was hot or cold.

“Whoa,” Brianna said when she appeared in the doorway. “You look like a lion.”

That didn’t make any sense, but it was Brianna. That girl never makes any sense. I held my hand out for the tissue box, which she delivered.

“Can I get you anything else?”

“Unless you can instantly make me feel a million times better, I just want to rest.”

“Okie-dokie!” she said. And she disappeared.

That was suspiciously easy. But maybe she was afraid of catching the plague. I couldn’t blame her for that!!

A few minutes later, JUST as I was about to fall asleep, she was back.

“I know how to make you feel better, Nikki!” She held out my phone.

OMG!!! I could see myself in the little square at the bottom, and suddenly I knew what Brianna meant about looking like a lion. My hair was sticking out in all directions, like a mane! Probably because of all the times I’d pulled my sweatshirt on and off.

Also, my face was red and splotchy. That made me look more like…I don’t even know! A lobster?

Normally, I might have hung up and apologized to Brandon later for getting disconnected. But I was too out of it to think straight. So, I just gaped at the horrifying image of myself and Brandon’s adorable face.

And then I started sneezing. Like a million more sneezes. And the whole time I was sneezing, I was hoping Brandon understood what I was about to say… I’m PRETTY SICK. Because otherwise?!?! He’d think I said, “Yeah, I’m pretty.”

Which, I’m all for self-confidence and all, but let’s be honest. At the moment, I was a sweaty lobster lion who’d almost used a dog-butt thermometer!!!!

“Wow! Bless you.” Brandon replied when I finally stopped sneezing.

And then…I still can’t believe this…I said, “Well, I should go. I don’t want to get you sick.”

But Brandon just laughed like I’d meant to make a joke. “You’re so funny, Nikki.”

FINALLY Brianna rescued me. She grabbed the phone and said, “Sorry, Brandon, but visiting hours are over. My patient needs to rest!”

And she hung up on him!! Which…normally I’d be super mad. But this time it worked out. I was too sick to even yell at her for calling him in the first place.

She WAS trying to make me feel better after all. And Brandon had seemed genuinely concerned! Also, he said I was funny (even if he didn’t realize I was actually delirious). So, I guess she sort of did make me feel a LITTLE better.

But, I’m not accepting any medicine from Nurse Brianna!! Who knows what she’d try to give me!!!!

When you’re sick, what usually makes you feel better? What do you do to help others feel better when they’re under the weather?