SNOW STORM OF THE CENTURY!! (OR THE MONTH, AT LEAST!) 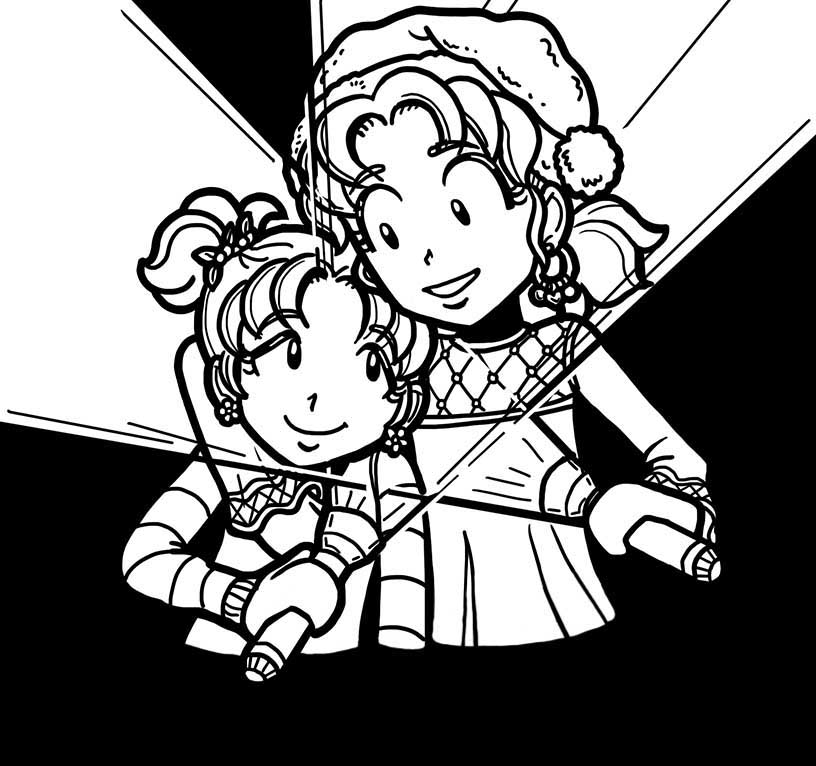 Dad’s at an exterminator conference for a couple days. I keep wondering WHAT a bunch of exterminators do together for fun!! Like…try to find the biggest, most awful bugs and see who can kill them fastest??

Anyway, Brianna was sad about Dad going out of town, so Mom said we should have a girls’ night. We’d load up on junk food and have a Disney movie marathon. Brianna got to pick the first movie (Finding Dory), but I got number two (Zootopia), and Mom was still deciding. She’d probably pick something ANCIENT, like Freaky Friday. It wasn’t going to be the same as a girls’ night with my BFFs…but I was still kind of excited!
It had been snowing all day, and the wind was really starting to howl just as we were getting into the car to pick up ice cream and pizza. Mom made sure Brianna’s belt was buckled, and then she got into the driver’s seat.

Suddenly, the light in the garage sputtered and went out.

At first, I thought it was just a burned out bulb, but NOPE! When my mom tried to use the automatic garage door opener…nothing happened. The power was out!!!

“There must be a way to open it by hand,” my mom said.

But…we couldn’t figure it out. So, since we couldn’t get the car out of the garage, we were STRANDED!!!!

“Well…,” my mom said. “I could heat up some leftover lasagna?”

Before Brianna could start screaming that she hates lasagna (which she does, even though it’s the exact same ingredients as pizza, just in a different arrangement), I pointed out that mom could only heat up lasagna if she was planning to fire up the grill (in the SNOWSTORM), since the stove wasn’t working due to the power outage.

“But we can still watch the movies, right??” Brianna asked.

My mom looked like she was going to panic. Not because of the power outage. Because of the look on Brianna’s face.

“Okay!” I said. “Mom, you figure out what we CAN eat. Brianna and I are going to go round up flashlights and stuff, before it gets dark.”

“Brianna, it’s going to be so fun!” I said. “And we’re definitely going to need your Princess Sugar Plum flashlight!!”

She ran off to get that, while I grabbed a couple more flashlights from the garage.

We met in the hallway. “Now what?” She had her flashlight on, even though it wasn’t dark out yet. I thought about telling her to save the battery, but I knew we had extras.

“Now lights!” I hauled out a couple of Christmas garlands with battery-powered lights on them.

“Nikki,” Brianna asked. “What are those Christmas decorations for?”

“That’s the fun of a power outage,” I said, as I put on a Santa hat. “We’re going to need ALL the lights we can find!”

“How are my girls?” My mom appeared with a tray of peanut butter sandwiches, chips, and marshmallows.

“Marshmallows!!!” Brianna screamed. “Can we roast them?”

“Umm…” I glanced at my mom. “Could we build a fire in the fireplace?”

So we did! By the time it was roaring, it had gotten dark outside, so we lit some candles, too.

Mom told some (not-all-that-scary) ghost stories. Then we painted each other’s toes with nail polish. And then…it was still only 7:00 pm. Brianna was starting to stare longingly at the TV. So, I did something I SWORE I’d never do again.

I brought out the board game, Candyland.

About a year ago, I swore I would NEVER play Candyland with Brianna again (it’s a long story, but let’s just say she’s an EXTREMELY sore loser). So, when she saw the box (which I might have hidden in the high-up cabinet where my parents keep bleach and drain cleaner), Brianna FREAKED.

She’s the MOST annoying little kid EVER, but there’s also something pretty cool about how excited she gets about stuff.

So we played Candyland four times. My mom and I both cheated, to be sure Brianna won all four times. That was WAY more enjoyable than it would have been if she’d lost.

Finally the sugar crash came, so now my mom’s getting Brianna to bed. The lights flickered a minute ago, so the power could be coming back. But I think I might just stick with the candles until I go to bed, too. I never knew power outages could be so much fun

So, what do you guys do to pass the time away during a power outage?