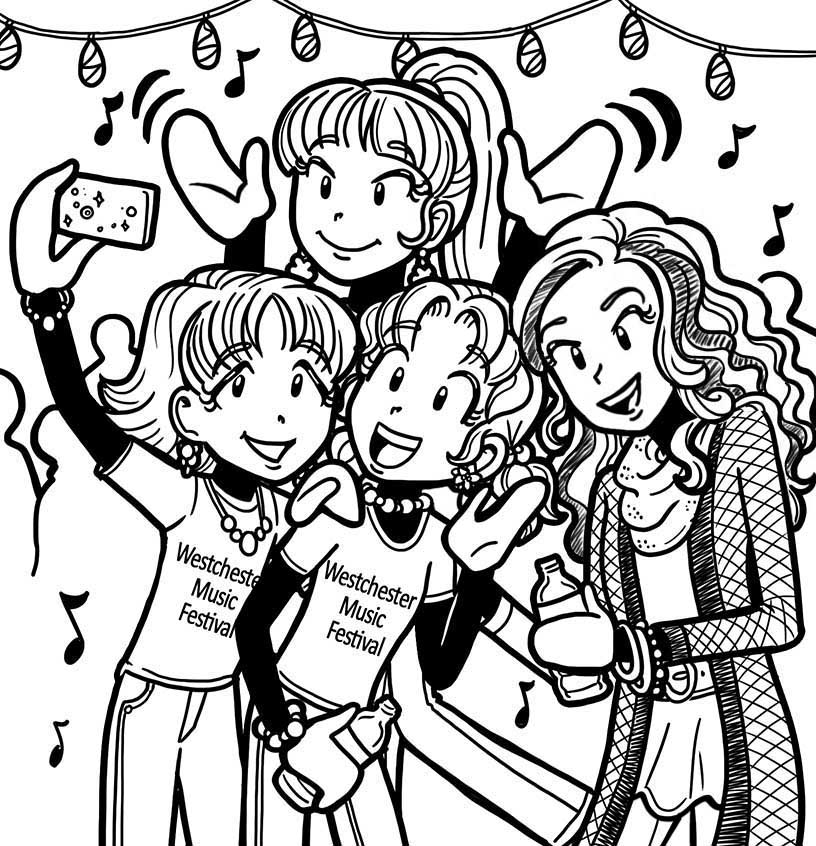 Okay, so Zoey’s dad is a record executive (records are how music used to be played, before the world got CIVILIZED—basically, he works in the music industry). And it took some arm-twisting, but I got my parents to say YES when Zoey invited me to this super amazing music festival that’s been sold out for MONTHS.

When we got the festival, Zoey’s dad handed us each these passes on necklaces that said ALL ACCESS.

“These mean you can go anywhere here at the festival?” he said. “There are four different stages, and you can get into general seating for all of them.”
“Can we go backstage, Daddy?” Zoey asked.

I hadn’t even THOUGHT of that!! I might get to meet The Bad Boyz, The Glitter Girls, and The Emojis! And the biggest headliner of the festival—Rainbow Cortez!! OMG!!

But he shook his head. “Sorry, sweetheart. The bands control backstage access. Have fun. Keep your phones on. Answer my texts when I check in. Got it?”

Then he hurried off to do whatever record executives do at a music festival.

Chloe, Zoey, and I looked at each other, and then all around us. Then, all together we screamed, “OMG!!!!!”

We huddled around Zoey’s phone to look at the schedule and decided to head to the main stage to stake out good seats for The Bad Boyz show starting in half an hour.

They were AMAZING. So were the Glitter Girls and The Emojis!!

By the time it started to get dark, we’d already had more fun than I thought I could have ALL SUMMER. We sent selfies to our friends, ate TONS of junk food, and danced so hard my feet were about to fall off. And Rainbow Cortez hadn’t even taken the stage yet!!!

We got to her show WAY early and collapsed on the grass. I didn’t think anything could ruin that moment. But then something did. Or SOMEONE.

“OMG, are you KIDDING me?” said the most annoying voice in the world.
(No, NOT Brianna pretending to be Princess Sugar Plum. Even WORSE!!!)

MacKenzie Hollister was standing there, hands on hips, sneering at us in our matching t-shirts. “What are YOU losers doing here?? I thought this festival was supposed to be exclusive.”

Chloe recovered from her shock first. Then, she replied, “I’ll have you know, THIS LOSER”—she pointed at Zoey—“has a father in the music business!”

MacKenzie snorted while Chloe told Zoey she didn’t mean that like it sounded.

“Whatever.” MacKenzie huffed. “Are THOSE your seats?”

OBVIOUSLY, they were our seats. Our stuff was all spread out.

I rolled my eyes. “Where are you sitting, MacKenzie? On the stage??”

She sniffed. “That wouldn’t be the best view. No, I’m in the VIP seats. IN THE FRONT ROW. Have fun, LOSERS. If you can’t see Rainbow from here, maybe I’ll post some videos on my YouTube channel later.”

We tried not to let MacKenzie put a damper on our fun. But, it was SUCH a bummer knowing she was there, and in the FRONT ROW!!!

Just a couple minutes before the show started, Zoey got a text from her dad.

“Daddy says we need to meet him down by the exit at the side of the stage,” she said.
Chloe frowned. “It’s filling up. If we leave our seats now, we’ll lose them!”

“Yeah,” Zoey said, “but if we don’t do what he says, he won’t get us in the next time he’s got tickets to something like this.”

So, we packed up our stuff and trudged down by the stage. It was a let down, since Rainbow Cortez was the singer we were MOST excited about seeing.

When we got down there, Mr. Franklin stepped out of a little door we hadn’t even noticed, which looked like it led backstage.

And THEN, from behind Mr. Franklin, came another voice.

“Leave? But my show hasn’t even started yet!”

And THEN Rainbow Cortez stepped out!!!!

“Rainbow has just signed with my label,” Mr. Franklin said. “And she thought you guys might like to come hang out in her dressing room during her opening act!”

Just as people behind us started to notice Rainbow standing in plain sight, Mr. Franklin motioned us into the little hallway. I turned around to see MacKenzie gaping at us and gave her a little wave.

“Maybe I’ll post a video later.” I shouted to MacKenzie. “But probably not!”