WHY ARE MY GUY FRIENDS ACTING WEIRD?? 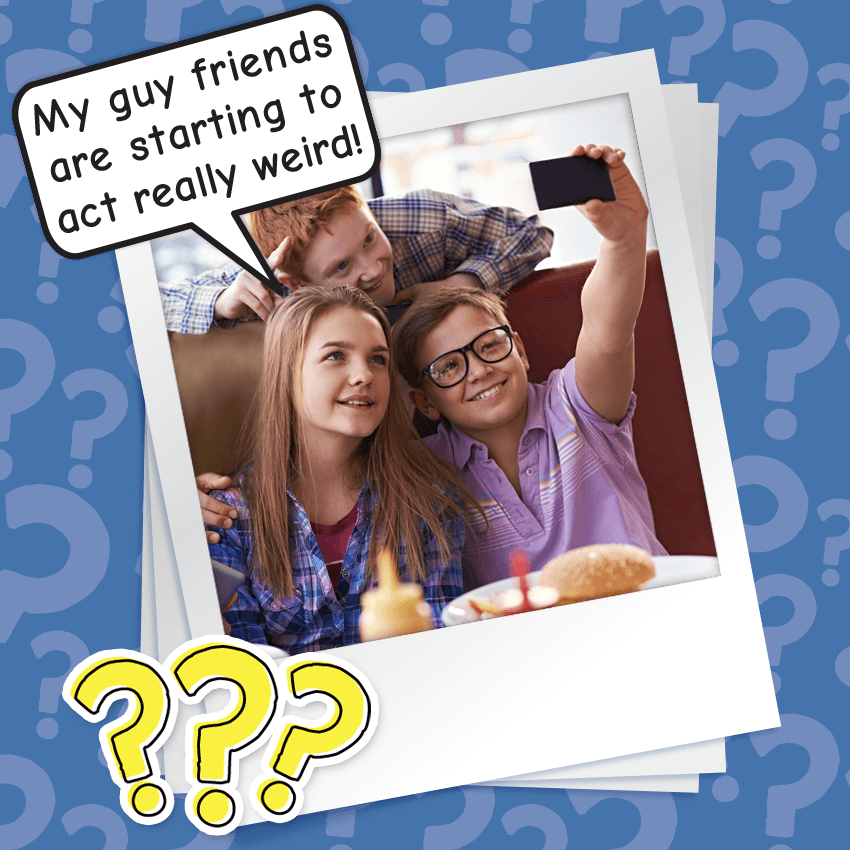 Hey Brandon,
I’ve been friends with boys pretty much all my life. The other girls think it’s weird, but I don’t care! Recently, things have been changing. I don’t know if it’s because of hormones or something, but the boys that I used to hang out with and tell silly jokes to are acting weird around me. Some of them have even asked me out! I really would prefer to stay friends with them but I don’t want to lose them because I hurt their feelings. I don’t know what to do!!

Okay, I’m going to let you in on a little secret. When us guys start to go through puberty, the hormones make us NUTS. This is NOT to make an excuse for any of the messed up stuff we do—we DO have self-control, after all. But it sounds to me like hormones might be a big part of what’s going on here.

(And to be fair, neither guys nor girls are all sunshine and roses when those hormones hit. We’ve all got to cut each other a little slack!)

I think it’s great that you’ve been friends with guys all your life, and that doesn’t have to end now. It just might be a little trickier. Because yeah, hormones are flying all around, making us stupid. Your guy friends might be just starting to notice you’re a girl. I mean, they knew before. But it didn’t matter. And it SHOULDN’T matter. But yeah, hormones.

And because they’re noticing you’re a girl, their wires get all crossed. If they’re logical about it, they don’t want to mess up your friendship, either! But…they’re not always logical about it. They might compete to impress you. They might suddenly think they’re going to offend you if they’re being too silly. And yeah, they might ask you out.

I think the best thing to do is ACT NORMAL. That’s hard, when the guys around you are acting like bozos. But rise above. Keep showing up for the pick up games or Xbox marathons, or whatever you like to do when you hang out. And call them on it when they get weird. Tell them nothing’s changed and you’re still you, so they need to chill out.

When they ask you out, I think I’d try to laugh it off and move on. Not laugh AT them, because guys have feelings too. But just don’t take it super seriously. If you don’t let it be a huge, awkward deal, they’ll probably move on to someone else. Say something like, “Dude, do you really want to date someone who can crush you in one-on-one?” Or, “I’m not interested in dating anyone. Hey, what did you think of the new superhero movie?”

Show them that you’ve been their friend and you’re going to be their friend, even through the weirdness. I bet your friendships will be stronger for it.

How do you handle it when your friends start acting a little weird around you?