STUCK IN THE MIDDLE! 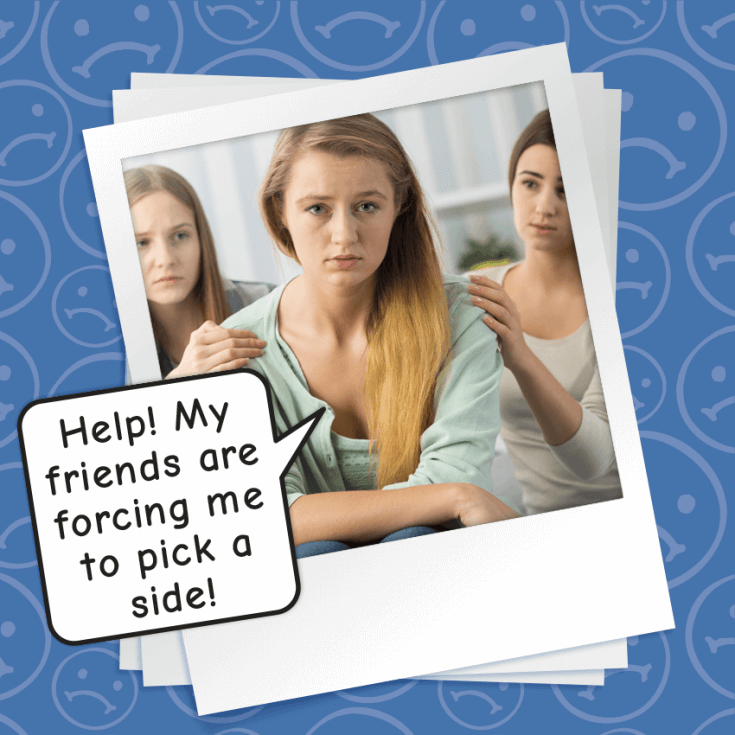 So, recently my two friends got into an BIG argument. I don’t want to make either of them mad or hurt anyone’s feelings, but they keep pressuring me to hurry up and choose whose side I’m on. I really don’t like picking sides and it’s making me really STRESSED OUT. I don’t know what to do! Can you help me?

Stuck In The Middle

Hey Stuck In The Middle,

Man, being stuck in the middle is not fun, so I’m really sorry you’re going through this. The problem is that if you choose a side, someone is DEFINITELY going to end up with hurt feelings. It’s kind of a lose-lose situation. Either way, one of your friends gets hurt. And you’ll be hurt too, when the friend you don’t side with gets mad at you.

(“I KNOW THIS, BRANDON. THAT’S WHY I WROTE YOU FOR HELP!” you may be thinking to yourself.)

I just wanted to state the problem clearly so you’ll understand why I’ll say this next: I don’t think you should choose a side. And I think you have to be clear that you’re NOT going to. Because if you’re just quiet about it, they’ll think you’re still deciding and they should keep pestering you to get you to choose one over the other.

I think you need to tell them really clearly and firmly that you like them both and that their argument is between THEM.  You’re not going to take a side, no matter how much they pressure you. And any time they try to bring it up again, you repeat the same thing. “Both of you are my friend and I’m not going to choose whose side I’m on.” You repeat it until they get it, or until it becomes annoying to everyone.

If they can’t get past their argument, they might need to sit down with someone neutral to help them talk it through – but it shouldn’t be you. You’re trying to be neutral, but since they’re both trying so hard to get you to agree with one of them, it would be really hard for you to help them with this.

So maybe pick a school counselor or a cool teacher each of you like to help resolve it. Or someone’s older sibling, if they can be neutral.

That is, unless your friends don’t actually want to resolve it. Sometimes there are issues so big and they just can’t let it go and then…well, then friendships change. I hope that’s not the case here. But if it is, they’ll definitely want you to take sides and I’d just encourage you to keep telling them you don’t want to lose either of their friendships.

But, hopefully it’s not quite that bad. Hopefully when you stand firm and make it clear that your friendship with BOTH of them is the most important thing, they’ll realize how ridiculous they’re being. Maybe they’ll even end up being grateful that you didn’t pick a side!

How do you handle it when you’re stuck in the middle between two friends? Tell us in the comments.