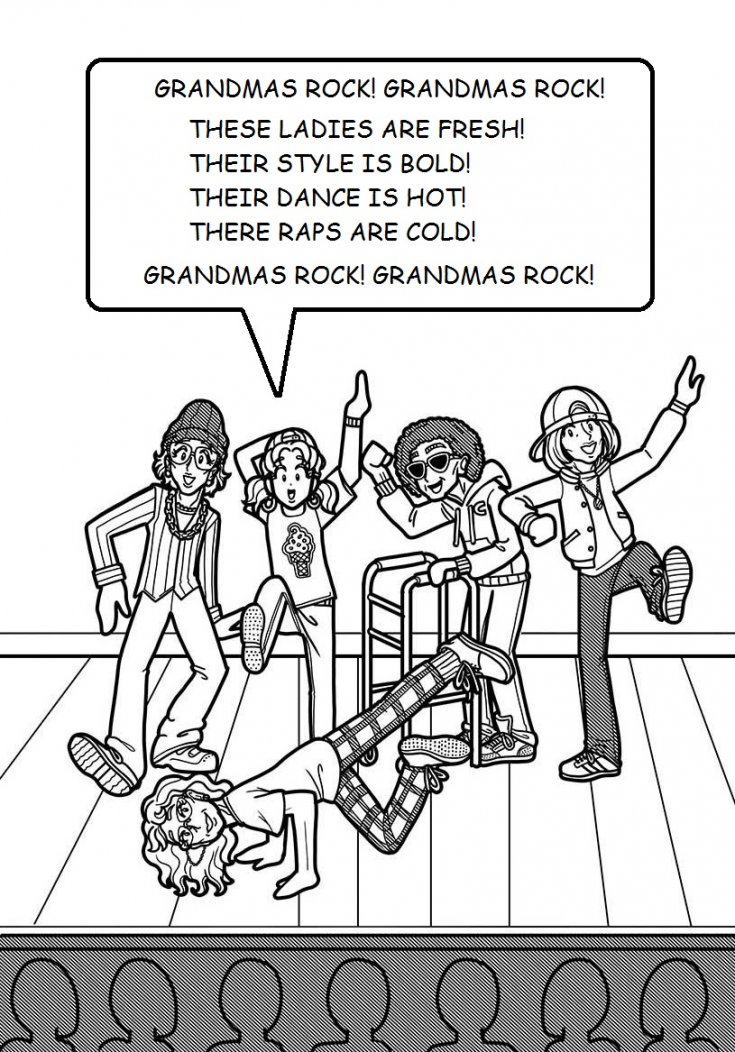 Today, my mom and I went to see Grandma Maxwell perform for Senior Talent Day at the local community center. The grand prize was $100, so Grandma Maxwell and her friends were really excited to participate. The eighteen people that signed up were super-competitive and going all out to win that $100. I didn’t think it was that much, but Grandma said senior citizens were on fixed incomes and $100 could buy three years of denture cream!

However, she didn’t say ANYTHING about helping her and all her ancient BFFs do a skit!!!

Not only THAT, but she had told everyone that of COURSE I would LOVE to be the stage manager!!!!!

As soon as we walked in the door, Grandma grabbed me and dragged me with her down the hall to where all the performers were getting ready. I was so shocked, it took me a minute to realize Grandma had a streak of hot pink in her hair!!!

“Yoo hoo, ladies and gentlemen! Here’s our stage manager,” Grandma announced to the room full of old people. Some were putting on makeup or costumes. Some were warming up their voices. One guy was struggling to lift his accordion out of its case.

A frazzled-looking woman my mom’s age shoved a clipboard into my hands. “Oh great, thanks so much for volunteering to do this! We’ll start in five minutes.”

And then she disappeared! And so did Grandma!

Grandma wasn’t hard to find, though. I followed her familiar cackle and found her with three other ladies, practicing some moves.

“Grandma, what am I supposed to do?!” I stammered.

Grandma waved her hand at the clipboard. “Oh, that’s the show order,” she said. “Just make sure everyone gets on stage at the right time. That’s all!”

I looked around. Accordion guy had already fallen asleep. Two ladies in feather boas were arguing over a tube of lipstick. Grandma did a spin and would have probably fallen and broken a hip if I hadn’t been right there to catch her!!!

I wanted to run away screaming, but what if someone DID break a hip?! It would be all my fault!!!

I looked at the list. “Martha and Doris?” I called to the room. Nobody paid attention, or maybe they couldn’t hear me.

“Over there,” Grandma said, pointing to the feather boa ladies, who were still arguing over the lipstick.

I marched over to them. “You’re on, ladies.” On the counter in front of them, there was another tube of the exact same lipstick. I opened it up and applied it to their wrinkly lips. “Let’s go! Break a leg! Or a hip! Except please don’t!”

They got up, and headed for a door that turned out to be the entrance to the stage. I’m not gonna lie, I felt a rush of power!

My job for the next hour was basically making sure each act was awake (and alive?!) and ready to go on when it was their turn.

“Bossy little thing, isn’t she?” an old guy with a trumpet muttered.

Grandma’s act was on last. A minute before they were supposed to go on, her friend Midge’s phone rang.

“No phones,” I said, reaching to take it, but she slapped my hand away. It stung, too!!!

“That is my grandson calling,” Midge told me. “He NEVER calls. I will NOT miss this call, young lady.”

The other ladies in the group nodded in agreement. “You always take a call from a grandchild,” one of them agreed.

I shrugged. “Guess you’ll have to do it without her,” I said, hearing the applause for the act before them.

And then she was dragging me through the door and onto the stage!

“Helloooo, Westchester!” Grandma smiled to the almost-full auditorium. “We are the Old School Grannies! And we’re here to drop some sick beeps!”

Then she turned to me, like she was waiting for me to do something!!

“You know,” said Ethel, one of her friends. “Like this!” She put her hands up to her mouth and started spitting noisily into them.

I do NOT know how to beat box! (Or beep box!) But that was okay, because Grandma and her friends didn’t know how to rap! It didn’t stop them from having a great time, so I did my best.

And honestly, I ended up having a great time too! 🙂