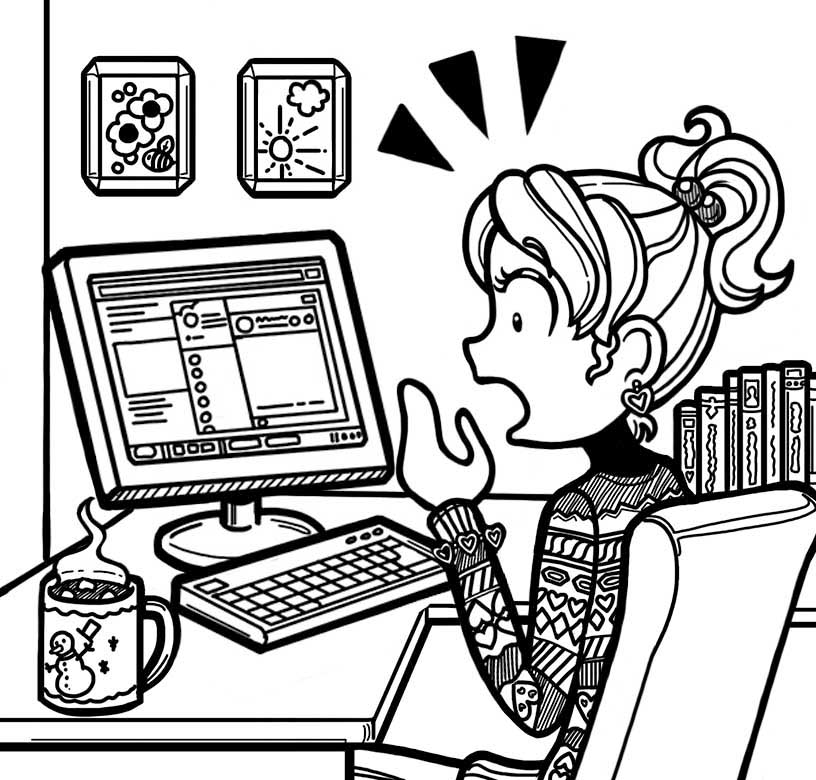 I CANNOT believe what happened!

I would be less shocked if a dozen fireflies flittered right out of my nose and then morphed together into my dad…that’s how TOTALLY shocked I am!

I haven’t been writing a lot about MacKenzie lately because writing about her means thinking about her, and I’m SO not cool with letting her live inside my head, rent-free!

But I just HAVE to tell you guys about what happened last night!

I was Skype chatting with Chloe when all of a sudden I got a request…to add MacKenzie!

We’ve NEVER Skype chatted before. In fact, we don’t even chat IN PERSON, unless you consider it chatting when she shouts, “Move dork” and I say something super witty and nasty inside my head so nobody hears it but me!

At first, I thought I’d just ignore her request. She ignores MINE on the reg…AND when I’m standing right in front of her! (That means “regularly,” in case you didn’t know!)

But then I got kind of curious, so I accepted it. Not even a minute later, I saw this message:

“Hey girly. Just thought of you. What are you up to?”

For a second, I thought maybe she forgot that Jessica’s name ISN’T Nikki Maxwell, because she was being all casual and friendly…in other words, totally not like herself!

I wanted to write back:

“Nothing, but I know what YOU’RE up to…no good! So back off!”

But then I decided to be friendly back to see where she was going with this.

“Just chilling and chatting with Chloe. What made you think of me?”

“I saw something that made me think of you, so I got it for you as a late Christmas gift.”

OK, this was getting TOTALLY bizarre! MacKenzie usually thinks her presence is present enough for me, and I’m LUCKY if she gives me that!

I thought for sure she was going to write something mean and nasty, like “It was a brown paper bag…to wear over your head!” or “Glasses…because you must be practically BLIND to dress like you do!”

But instead, she wrote:

“I can’t tell you! It would ruin the surprise! I’ll give it to you after winter break, as soon as we get back to school. TTFN!” (That means “ta ta for now!”)

After that, I asked Chloe what she thought about all this, and she wrote:

“Maybe she’s turned over a new leaf! People do that sometimes around New Years!”

Call me cynical, but I somehow doubt that’s it. I mean, this is MACKENZIE we’re talking about here! She’s way too cruel, heartless, and just plain evil to EVER become a good person! Or…is she?