My Older Sister Is Ruining My Life! 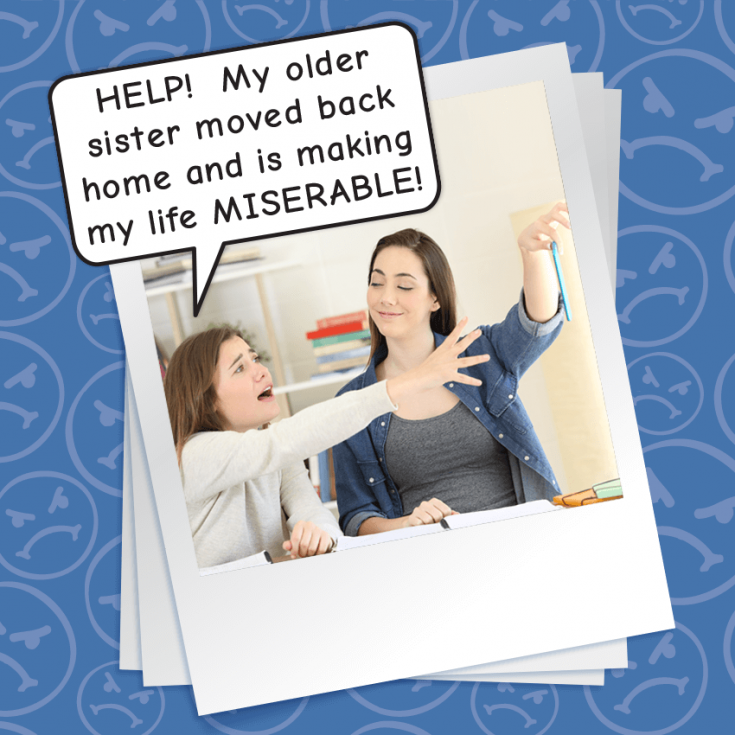 Hey Brandon,
My older sister just came to live with us after she had been struggling “financially” and it has been a total nightmare!! I don’t even know where to start. She’s been meddling with my things in MY room even though she has her own room! She took my diary and read it to the whole family at dinner while I was at a sleepover. She took my perfume and used it all as air freshener. And to top it all off, she got my camera and deleted all of the pics I took and replaced them with photos of her in MY sweater!! That was the last straw!! SHE IS RUINING MY LIFE! Help Brandon, please!!

So Sick Of Selfish Sister

Hey So Sick Of Selfish Sister,

Okay, wow. I get a lot of emails about annoying siblings, but what stands out to me here is that your sister is probably college age, right? If she moved back home because she was struggling financially, that tells me she’s a young adult. Maybe like 18 to 20 years old, but she is an ADULT.

Which makes her behavior EXTRA annoying because she should totally know better! I don’t know a lot about siblings, but from everything Nikki has told me about Brianna, I’ve always assumed younger siblings would be the most annoying. But your sister sounds like she’s at least as annoying as Brianna!

Because here’s what I’m thinking: If she had moved out, and then had to move back home because she couldn’t manage on her own, she probably feels embarrassed about that. Like she failed in some way, you know?

So she’s feeling sort of powerless, and what better way to feel more powerful than flaunt her power over you. It’s really the classic behavior of a bully—lashing out to make herself feel better. (Though I bet it doesn’t actually work.)

ALL of the things you mentioned—reading your diary (and sharing it!), stealing your perfume, erasing your photos—are HUGE violations of privacy. If you haven’t already talked to your parents about it, that’s the first step. They should NOT be letting it slide. They might be unsure how to discipline their adult daughter, but they need to do SOMETHING to support you. A lock on your bedroom door might help, but it won’t get at the root of why your sister is acting how she is.

Because she IS an adult (even if she’s not acting like one), I also think you should talk to your sister. Maybe you should do it with your parents present, and you should DEFINITELY do it when you’re not already in the middle of a fight. Maybe she won’t be able to have a reasonable conversation about it, but you should at least give her a chance. Don’t let the conversation become about any one thing—she might try to say that she erased your pictures by mistake, or reading the diary was a joke, etc.—but explain how the pattern feels like a huge invasion of your privacy and you’d like her to give you the same respect you give her.

The good news is, this behavior is temporary. I’m sure of it. She’ll eventually chill out and get over her insecurities and/or she’ll move back out.

In the meantime, keep standing up for yourself, keep communicating with your parents and your sister, and know that you deserve privacy and we’ve got your back!

How do you handle annoying older siblings? Tell us in the comments!