MY FRIENDS MAKE FUN OF ME FOR BEING SMART! 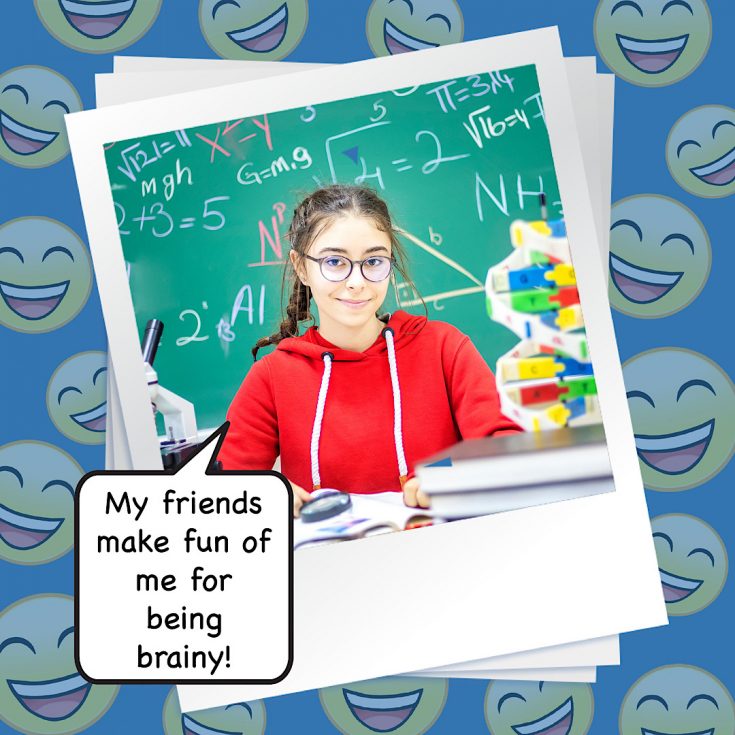 My friends are always making fun of me for liking books and being smart. I share facts about successful smart people, but they just keep making fun of me and laughing at me. I act like it doesn’t bother me, but it does. Any advice?

No offense, by the way. You know, since your name happens to be Miss Smarty Pants and all. Being smart is cool because it means you’ve got some pretty mad skillz.

Anyway, I digress… I’m so sorry your friends don’t get it. What a major bummer.

There’s NOTHING wrong with liking books and being smart. In fact, there’s everything RIGHT about that. Like you point out, smart people are the ones who end up being SUCCESSFUL.

And even if it’s not about going to a good college and having a good job in the future, there’s nothing wrong with enjoying learning and reading. Those things are awesome!

Honestly, I think your friends might be a little jealous. They know that being smart matters, so your smarts might make them feel insecure. They might think your life is easy-peasy (even though you probably work super hard) and that frustrates them when they struggle.

I know it’s hard, but it sounds like you’re doing the right thing. Even if their teasing bothers you, acting like it doesn’t and like they’re being ridiculous is your best option. With THESE friends, anyway.

But you know what? You need some new friends. I’m not saying dump the ones you’ve got. But there’s always room for new ones that treat you better. You deserve friends who GET you! Because the LAST thing you should do is hide your brains or be embarrassed by them!

Seek out friends who are brainy like you and are into the same topics you’re into, whether it’s reading, writing, math, science, or whatever. Artsy/theater kids are not always into that kind of stuff, but they tend to be more tolerant of people being themselves without judgment, so you could try them too. Although online friend groups aren’t the same as in-person friends, you could also try those as well until school starts up again. Just make sure your parents are cool with it.

Hey, your friends don’t have to be into the same things you are, but they shouldn’t act like you’re a weirdo for liking what you like. They’ll get it eventually, and you’ll have the last laugh. Bullying for being smart is the worst in late elementary school and middle school. By high school it happens a lot less, because people are starting to think longer term about college and life after school and realizing the brainy kids have the right idea.

But until then, find the friendship and support you need from like-minded people. You can start here on the Dork Diaries website, where obviously everyone loves books and letting their inner dork shine through!

Do your friends share your interests? If you’re into books and brains, where do you find like-minded people? Tell us in the comments.