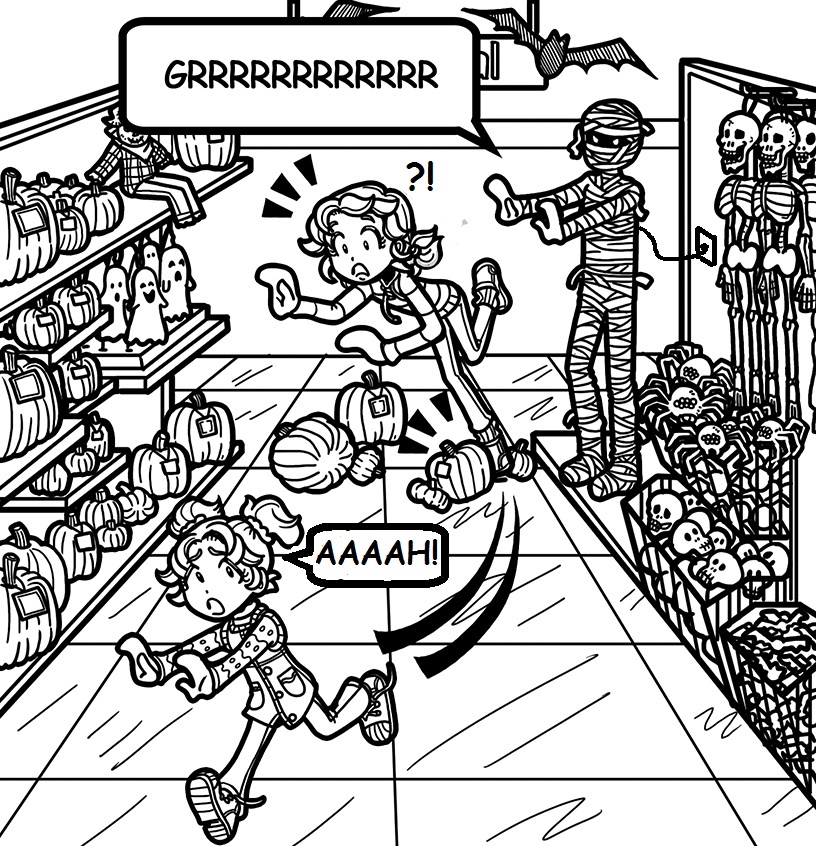 OMG!  I AM SELLING MY LITTLE SISTER!
Seriously, could you use an occasionally adorable (but mostly infuriating!!!) little kid around the house? Maybe you need someone to drive you up a wall or steal your stuff or blame things on you? She comes at the extremely low, low price of FREE!!! JUST TAKE HER AWAY!

Sorry. I HAD to get that off my chest. As you can tell, I’m a little annoyed with Brianna.

We just got back from the craft store, where we’d gone to get a few new Halloween decorations. We’ve had our old ones for as long as I’ve been alive and they’re getting kind of sad. Like, I’m sorry, but there’s nothing spooky about the cracked pumpkins my mom made in pottery class when she was pregnant with me.

It was hard enough convincing my mom we needed a few new things and I knew she would freak out if I had a massive list of things to buy. I mean, there’s a reason we’ve had the same decorations since dinosaurs roamed the earth and you really didn’t need spooky decorations because the T-Rex down the road might gobble you up at any moment and that’s spooky enough.

So while I really wanted the deluxe life-size motion-activated zombie family that reaches out and grabs trick-or-treaters as they come up the walkway, I’d kept my list reasonable—some of those spider webs for the bushes, a few strings of pumpkin shaped lights, and this cool giant spider that was a little expensive but I had gone online for the coupon and everything!

Okay, so everything was under control. Until we got to the craft store. I had a bad feeling when Brianna started bouncing around in the parking lot.

“HALLOWEEN! HALLOWEEN!! HALLOWEEEEEEEN!!!” she screamed, then darted away from us and almost got flattened by an oncoming car.

Okay, I get her excitement. I LOVE Halloween! But A) it’s still two weeks away and B) Mom was clearly already on her last nerve. When she’s got that look on her face, it’s a delicate situation. Push her too far and she’ll show you scary!!

Then we got inside the store and Brianna super totally lost her tiny little mind.

“Pumpkins!” she squealed in glee.

“GIANT SPIDERS!!” she shrieked and almost knocked over the display of giant spiders (the ones I had the coupon for!!!).
Did I mention she was running back and forth from display to display, pointing and grabbing, and making other shoppers swerve their carts to avoid squashing her?

And I was lunging and diving like a mad woman to catch falling spiders and steady wobbling displays, praying my mother’s face hadn’t moved over into scarier-than-zombies territory.
Finally I got a hold of Brianna. “Brianna, take a chill pill!” I hissed. “Or Mom’s going to lose her mind!”

I swear, she was practically vibrating in my arms. I think if I had let her go, she would have shot forward like one of those pull-back matchbox cars. “We’re going to get some really cool stuff,” I said in soothing tone, imagining I was at Fuzzy Friends with an especially scared new rescue puppy. “But first, take a deep breath.”
And she actually did it! I couldn’t believe Brianna was listening to me. “Now let’s count to ten,” I said, and I started counting. Brianna joined in, and I felt like SUCH a good big sister! I mean, okay, I was really doing it so I could get the stuff I wanted, but I was still helping my crazy little sister, right??

We got to ten and Brianna seemed calmer (because I’d been so awesome), so I let go of her hand. She took one step like a normal person…and then another step…and then on her third step she screamed “MUMMMY!!!!” And then she turned and ran, howling, in the opposite direction, knocking over a display of foam pumpkins that I tripped over as I chased after her.

(It might be a tiny bit my fault that Brianna is so scared of mummies because the other day she wanted to watch Princess Sugar Plum, but I was in the middle of MUMMY REVENGE 4 and I sort of said it wasn’t that scary and she watched for a while and for three days even the sight of toilet paper scared her.)

By the time I caught Brianna and my mom apologized to the store manager, Mom’s face was past the point of no return. “We are going home NOW!” she said.

“But Mom, what about my decorations?”

But she gave me The Face and we left empty-handed.

Who needs spooky decorations when all I really need to do is set my mom on the porch with her point-of-no-return face on and we’ll be the scariest house in the neighborhood!

(I DO!! I NEED SPOOKY DECORATIONS!! But I’m not going to get them and it’s ALL BRIANNA’S FAULT!!)

HELP!!  What should I do to try and fix this very bad situation?!!