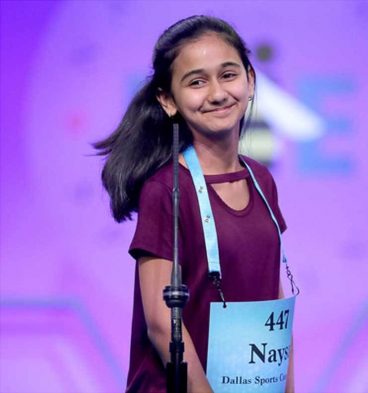 Hey readers, I’m going to tell you about an elite competitor. This individual trains for several hours a day and competes on ESPN in front of a national audience.

I’m talking about 13-year-old Naysa Modi, an elite speller from Texas.
Yeah, I said speller! Didn’t know spelling was a sport? Well, maybe not a sport…but it’s definitely a competition that requires a ton of training, dedication, and guts. Spellers stand on a stage, alone at a microphone in front of a huge live audience (and broadcast on television), and get one chance to spell a super hard word aloud (no scratch paper!) before moving on to the next round. It’s super stressful!

Your school might have a spelling bee—maybe you’ve even participated. If you win, you usually go on to a county spelling bee with the winners of all the school spelling bees in your area. From there you might go on to state and regional competitions. But only the best of the best winners of those state and regional competitions go on to the Scripps National Spelling Bee, which comes on ESPN. It’s the Oscars/World Series/Olympics of spelling!

And Naysa Modi has been there FOUR TIMES! She went for the first time when she was only nine years old. She tied for 50th place. But she wasn’t discouraged—it was an amazing accomplishment just to be there. She came back the next year and tied for 46th place! Improvement! The next year she was back, and finished seventh, missing the semi-finals by one point. And then, last year in 2018, she was in the final round and came in second to a speller she had beaten in a regional competition.
The word she went out on? Bewusstseinslage. OMG!!! I can’t even pronounce that word—forget spelling it!!!

But here are some words she has spelled right in the competition: Beetewk, tchotchke, phthisiology, tabard, Weissnichtwo, schadenfreude, schottische and rejoneador. Naysa is officially a spelling QUEEN! 🙂

How does she stick with it and keep coming back? “It’s not just words,” she says. “It’s staying calm on stage, staying calm under pressure, managing time. It’s been really exhilarating.”

In addition to spelling, Naysa does tae-kwon-do and stand-up comedy, plays soccer, and wants to be a doctor. This year she’s in eighth grade, which is her last shot to win the Scripps National Spelling Bee! I know I’ll be tuning in to ESPN and rooting for her!!!

What’s something you’re really good at? Hey, it’s okay—you get to have full bragging rights and tell us about how AWESOME you are in the comments!