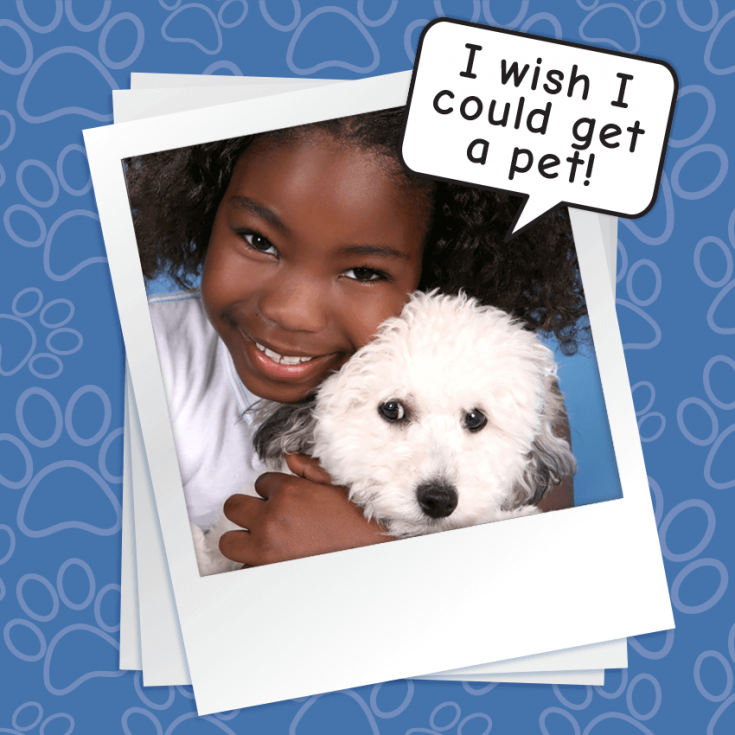 Hey Brandon,
I really want a pet and I’ve been asking forever but my dad just says no. This is so upsetting because I love pets. Now I’m really depressed because I’m never going to have one!! Help!!!

I Want A Pet Pretty Please

It’s always such a bummer to hear from someone who really wants a pet but can’t get one. But it’s common – so at least you’re not alone.

So first of all, I think you should talk to your dad and ask (with NO whining) what his reasons are for saying no. If you know WHY he’s saying no, then you can figure out if there’s something you can do to change it.

For example, if he’s saying no because he or someone else in the household is allergic to the kind of pet you want, well, then I’m afraid there’s nothing you can do about that.

But if he’s concerned about costs, you could do some research to figure out the costs, not just of adoption, but also food and vet bills for your pet. And then you could figure out how much money you could contribute to help pay those costs.

He still might say no, but if he sees you being reasonable and thoughtful about how to problem-solve, there’s a chance he might say yes.

If there’s no way to change his mind, remember that it doesn’t mean you’ll NEVER have a pet. At the very least, you can have a pet when you’re older and living on your own. OR your family situation might change, like someone might get a higher-paying job, etc. So, never say never. 🙂

My first suggestion would be to volunteer at a shelter like Fuzzy Friends. Shelters always need help. And sure, you’ll do some sweeping and cleaning out cages, but you’ll also get plenty of time snuggling the animals. Shelters want the animals to stay comfortable with people, and they want to get an idea of each animal’s personality. Volunteers are really important for that.

You could also let your neighbors know how much you love pets. Then, when they go on trips, or even just have a long day at work, they may ask you to come over and feed their pets, play with them, etc.

I hope this helps. I know you’ll have a pet one day, and I hope it’s sooner than later!

Have you ever convinced a parent to let you get a pet? If you’re not allowed to get a pet, how do you find ways to hang out with animals? Tell us in the comments.