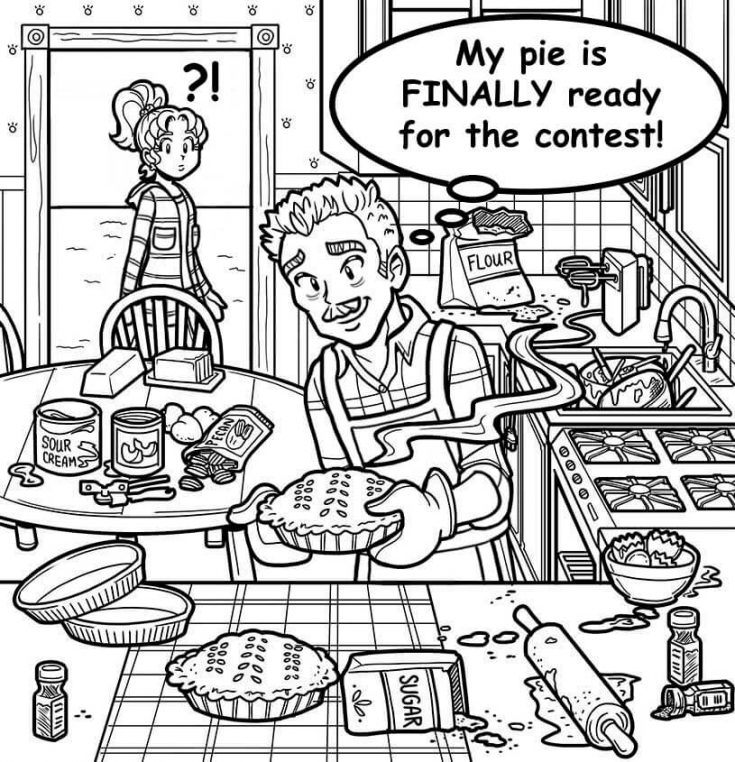 Okay, it all started when my dad baked a delicious apple pie for my mom. Mom said she loved it so much that he should enter the 89th Annual Westchester Pie Contest.

It started out fine. I mean, I like pies! (Except when he goes a little over the top with his ideas – avocado nutmeg pie was a NO THANK YOU from me!)

He decided on a Sour Cream Peach Pecan Pie with this super fancy woven crust. And, he wasn’t going to bake just one, but TWO of them! One for the contest, and one for us to celebrate with at his favorite restaurant, Queasy Cheesy Pizza, after he won FIRST PLACE. Talk about SUPER AMBITIOUS!

In fact, Dad worked SO HARD on his pie recipe that he only got one hour of sleep on Thursday night and he pulled an ALL NIGHTER on Friday. Which means he didn’t get ANY sleep whatsoever. He was like a walking, pie-obsessed zombie!

By the day of the contest, he was a TOTAL WRECK! So was our kitchen. But his precious prize-winning pie was FINALLY ready.

Exhausted, Dad slowly trudged upstairs to change out of his flour-covered apron and into a suit and tie for the contest. He was SO TIRED that it took him forever to get ready!

When we got to the community center, it smelled AMAZING. The pie makers were ALL little old ladies, but Dad didn’t care. Since he was the only guy in the competition, they treated him like Shawn Mendes or someone. And Dad ate it up, no pun intended!

The judges went down the line of pies, meticulously critiquing each one. As they slowly made their way down the table, Dad yawned and started to dose off.

Suddenly, there was a loud SPLAT! The entire room gasped to see that Dad had fallen asleep and face-planted right into his precious pie! Yes, the one that took him FOREVER to make!

The judges looked horrified, but continued to make their way down the line of pies.

Mom frantically shook dad awake. His face was covered in peaches, sour cream, cinnamon and piecrust. Dad slowly lifted up. Then he looked down at his messed up pie.

Mom tried to calm Dad down and whisper-shouted, “Honey, you did it! You dosed off and fell into your pie!”

Dad let out a huge groan and tried to cover his face but just ended up getting goopy piecrust everywhere.

POOR DAD! I felt SO sorry for him! But that’s when I remembered something.

“Not now, Nikki!” Mom interrupted as she handed Dad a bunch of napkins. “Your father’s devastated that he won’t be able to compete and he’s having a major meltdown!”

My Dad just kept gasping, “MY PIE! MY PIE! WHAT HAPPENED TO MY PIE?!!”

That’s when I quickly disappeared and returned as the judges finished the pie before Dad’s.

The judges came over to Dad and whispered to each other. Then one of them said, “I’m sorry, Mr. Maxwell, but at this point, we’re going to have to disqualify you from the contest since you don’t have a pie for us to judge.”

“Hold on! My dad has a pie! This one!” I shouted, carefully placing our celebration pie on the table.

The judges looked at each other and shrugged. Finally, they each tasted the pie.

They LOVED IT!! Dad’s pie WON first place after all!! 🙂

We all had a great time celebrating Dad’s win at Queasy Cheesy! Well, everyone except Dad. He was SO exhausted from all of the PIE DRAMA that he ate half a breadstick, dosed off, and slept through the entire party! Hey, I didn’t mind the loud snoring as long as he didn’t face-plant into our mighty meat monster pizza!

Thanksgiving is right around the corner! What is your fav Thanksgiving dessert? I’d also love to hear about your Thanksgiving plans in the comments! Will your family be hosting thanksgiving this year or traveling to visit relatives?