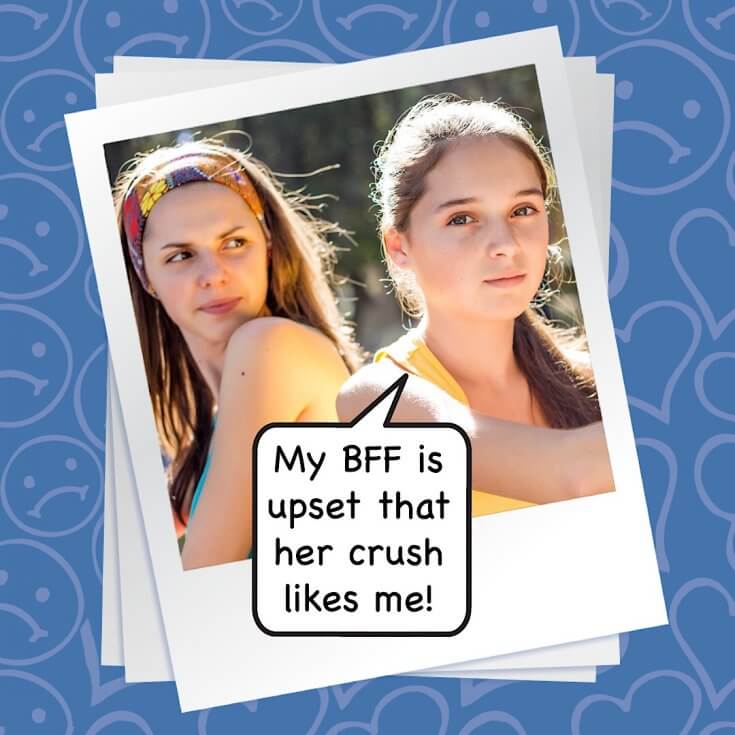 Brandon, I feel SUPER guilty about this. This guy in my class likes me, and my BFF has a HOPELESS crush on him!! On the last day of school, we were cleaning up the classroom, and he wanted to be my helper. But, then my friend got SUPER mad and didn’t talk to me, but I don’t even like him back!! She’s not replying to my texts, and I’m TOTALLY FREAKING OUT! What do I do??

This is a tough situation. But let’s get one thing straight. YOU didn’t do anything wrong. You’re obviously a very good friend and you care about how your BFF feels, which is cool. But you shouldn’t feel GUILTY. Because “feeling guilty” sounds like YOU did something wrong and you didn’t. It’s not your fault this boy likes you. And it’s not like he asked you to a dance and you said yes. You didn’t betray your friend by letting this boy help you clean the classroom.

As long as we’ve got that straight…whether it’s reasonable or not, the fact is, your BFF is still really mad. Or hurt. Or jealous. Whatever it is, she’s taking it all out on you. I’m sure when she’s feeling more reasonable, she’ll be able to see you didn’t do anything wrong. But in the heat of the moment, she felt awful and you were her target. Because who else was she going to blame? Not the guy. (Who also didn’t really do anything wrong – it’s not his fault he’s crushing on you and not her. And honestly—speaking as a guy—he’s probably 100% oblivious to how she feels, because she never told him she likes him.)

I’m not sure what she thinks you should have done differently. Refused his help? But like, what reason were you supposed to give him? She wouldn’t have wanted you to say, “You can’t help me because my BFF likes you and she’s my BFF.” That would have been a LOT worse than just letting him help you. It’s not like you were flirting with him.

Unless you were flirting with him? Like, for example, staring at and gushing over him. You might think back on whether there’s any way she could have interpreted it as you flirting with him. And if there is, then you might have a small something to apologize for.

Hopefully she just needs time to cool off. If you’ve already tried texting and she’s not responding, it might be time to step back and give her a little space. Maybe send one more texts letting her know you’re there for her and you want to talk whenever she’s ready but you’re going to give her some space. And then stop texting, calling or checking in.

When she’s finally ready to talk, you don’t want to apologize, because that’ll make it seem like you did something wrong. But you can make SURE she knows that you don’t like her crush, and you’ve never encouraged him to like you. You could ask her how she would have liked you to deal with the situation differently, so you’ll know what to do if something happens in the future. Or if she wants you to do something really unreasonable that will hurt the guy’s feelings, maybe gently point that out. If she likes him, she shouldn’t want his feelings to be hurt.

The thing is, your BFF is forever. (Literally. That’s what BFF means—best friend forever.) Crushes will come and go, even though when they’re happening they feel like the center of your world. It might take some work to get through this, but a crush is never worth breaking up your friendship. It’s worth doing the work to make sure it doesn’t.

How do you guys handle it when crushes come between friends? Have you ever crushed on someone who was crushing on your BFF?