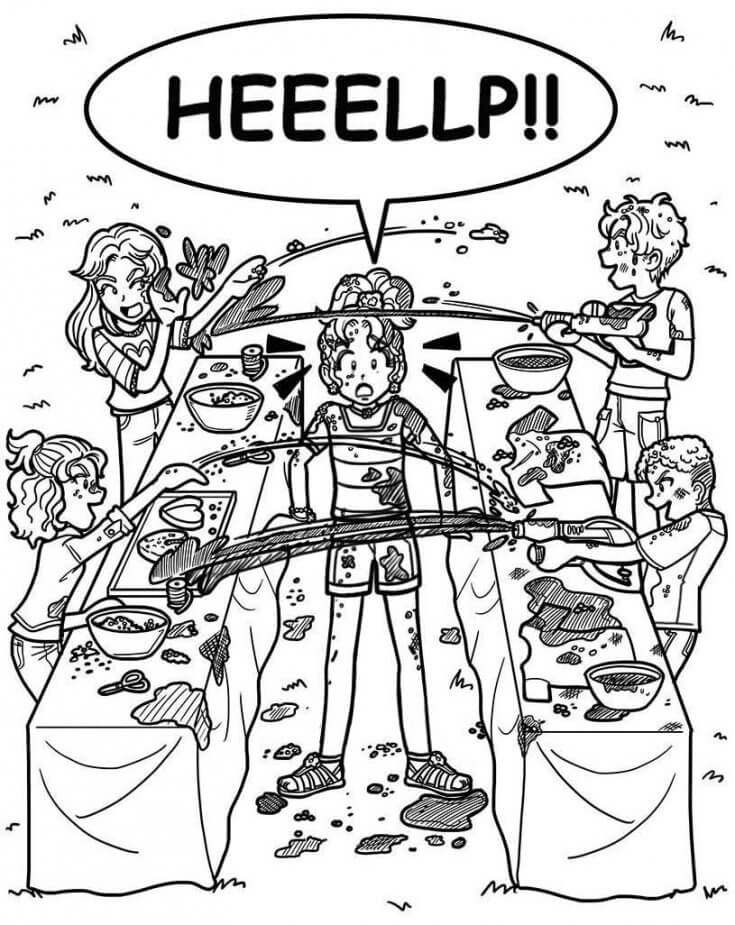 I have a very important piece of advice for my future self (and anyone else who might be reading this): NEVER tell your mother you’re bored!

School had been out for a little while and OBVIOUSLY I was glad not to have to do math, history, eat cafeteria food or run laps. But also the days are LONG without school! Chloe had gone to visit her grandma for a week, and Zoey had gone off to this Girls Rock music camp—which sounded AWESOME BTW but my parents said we couldn’t afford it—so I was STUCK at home.

The first few days I read books, I wrote in my diary, I watched some TV, and somehow I barely made it to lunchtime. I still had allllll afternoon and evening to fill! And I should have KNOWN that telling a parent you’re bored is just ASKING to be given an AWFUL task to fill your time.

At first it didn’t sound that awful. Mom’s friend Julie was in charge of the community center day camp, and had just texted mom in a panic because one of her counselors had a family emergency and wouldn’t be there the next day. When I said I was bored, Mom called her and just like that, I was signed up to be in charge of the craft station!

When I got there the next morning, Julie sort of shoved me toward a cluster of tables with a sign that said CRAFT STATION and then she was off to put out some fire somewhere, apparently. (Not literally, I don’t think. But maybe! It seemed possible!)

I found some bins of supplies and a couple print-outs from a mommy blog about the two craft choices for the day: birdseed ornaments and squirt gun tie dye.

Um, who thought giving squirt guns full of PAINT to kids was a good idea?!?!

But what did I know? Julie had been running this camp for years. Maybe these kids were extra mature.

And then my first batch of campers came screaming my direction.

They were like Brianna’s age and a little bigger. Maybe 6 – 9 years old? Boys and girls, and they were WILD. A couple of kids immediately grabbed squirt guns I had set out and started shooting. Thankfully they didn’t have paint in them yet!

But if Brianna has taught me anything, it’s how to yell at squirrelly little kids.

“There are two crafts!” I yelled. “Only some people get to use the squirt guns! People who are sitting quietly get to choose their craft first.”

It was like magic. They were all instantly seated.

It turned out we had enough supplies for everyone to do whatever they wanted, and it was no surprise when two little nature-loving girls picked the birdseed ornament craft, and the other ten kids all grabbed for the squirt guns and paint.

I thought about making threats about what would happen to anyone who pointed the squirt guns at anything but a t-shirt on a piece of cardboard, but I was afraid of planting ideas in their maniacal little brains. It wasn’t my first time at the six-year-old rodeo!

So, after I explained the steps carefully, I had the kids stick the cardboard in the shirts and get them set up. Then I filled the guns with watery paint. I picked a couple of the most responsible-looking kids to go first, and things went well. The shirts looked pretty cool. I thought I might make one for myself if there was an extra shirt left over at the end.

When it seemed like things were pretty much under control, I went to check on the birdseed girls.

BIG MISTAKE!!! RED ALERT!!! FIRST RULE OF CRAFT STATION: THE NATURE LOVING CRAFT GIRLS ARE ALWAYS FINE!!!! DO NOT TAKE YOUR EYES OFF THE KIDS WITH PAINT AND SQUIRT GUNS!!!!

I lunged for the boy in question, but his buddies were giving him cover! They were ALL aiming at me! Well, except for the ones who were aiming at some of the other kids, and the bins full of supplies. And then there was the kid with a squirt gun menacing towards the music group across the field, happily singing I Met a Bear with no idea they would soon be covered in paint.

Forget the kids with paint guns turning on each other. My priority had to be the kid heading toward the oblivious singers. I turned and sprinted toward him and I’m not going to say I tackled him, because that would be very un-counselor like, but I stopped him. With my body. And we may have both ended up on the ground.

I wrestled the squirt gun away from him and turned back to the craft tent.

UNFORSEEN TWIST!!! The quiet nature girls had somehow been drawn into the battle and now EVERYTHING and EVERYONE was covered in both paint AND birdseed!!!

Their shrieks and battle cries filled the air! Campers from other stations started leaping into the fray! And finally, thank goodness, some actual adults arrived!

I was sent home without the thank-you gift card I had been promised. That was fair, I guess.

I will NEVER complain of being bored again. But more importantly, I think my mom has learned never to volunteer me for something ever again!

Hey readers! You can try squirt gun tie-dye by mixing three tablespoons of fabric paint with one cup of water and pouring the mixture into a squirt gun or spray bottle. Then squirt the paint onto a blank white t-shirt.

Have you ever been to a camp before? What did you do there? What kind of camp would you love to try? Share your answers in the comments!