A BULLY KEEPS PICKING ON MY CRUSH! 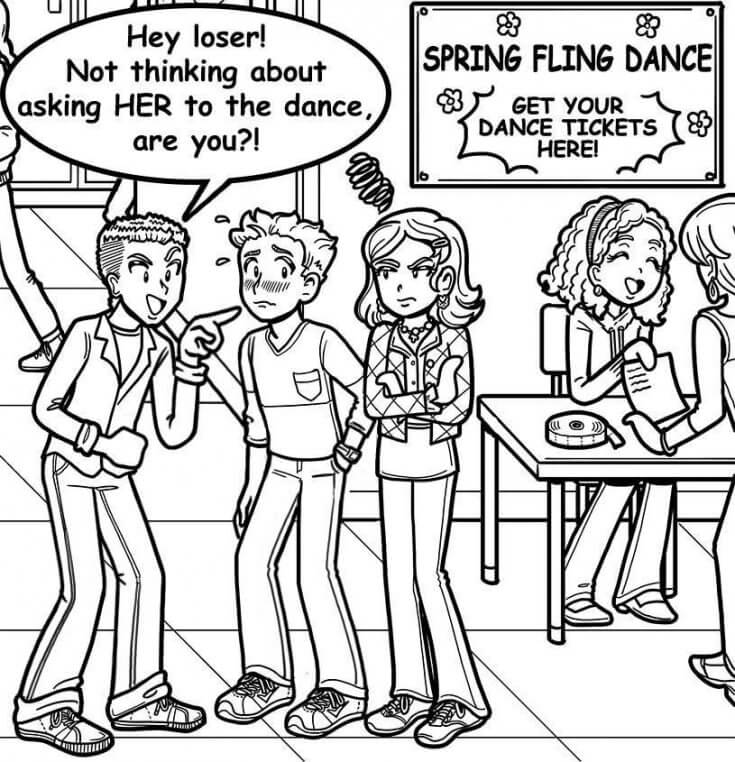 Justin likes me, but I don’t really like him back because I’ve got a crush on Chris. That makes Justin jealous, so he bullies Chris. Our school dance is coming, and it’s boys ask girls, but I’m pretty sure Chris won’t ask me since he’s afraid of Justin. Justin has already asked me to go to the dance with him FOUR TIMES, but I just want him to leave me and Chris alone. PLEASE HELP!

UUUURRGHH!! Justin’s behavior is SO not cool! There’s a lot going on in this letter, so let’s break it down:

Okay. Let’s talk about how Justin is basically stalking you. I’ve answered other questions about what to do when you don’t like the guy who’s crushing on you. That’s a tough situation, but it’s way different than this one. Because he’s not just crushing on you. He’s being pushy and NOT taking “no” for an answer. This is NOT OKAY.

There’s this ridiculous thing in TV and movies where boys are taught not to take no for an answer. In romantic comedies, the girl says no, but then the guy does all these outrageous things, and in the end, he always gets the girl. It seems cute and funny when it’s all glossy Hollywood-style, but it’s NOT cute and funny when you’re the girl who wishes a guy would LISTEN when you say NO. Like, it’s not that hard!!

And movies aren’t real life, but guys get fed this line that they can earn the girl’s affection. And then when real life doesn’t turn out that way, they can get super ticked off.

So, I think you should hold your ground. And be clear. Maybe you already have been, but a lot of times girls try to be “nice” which can make guys like Justin think that they still have a chance. Try saying, “No, and I’m not going to change my mind, and it’s making me uncomfortable that you keep asking. So, please stop.”

If he keeps pushing even after that, I’d talk to a teacher/counselor/some sort of adult who can step in and help you. Because I want you to stand up for yourself, but I don’t want to put you in a difficult position with a guy who sounds like he could lash out if he’s mad.

Okay, on to your ACTUAL crush. I can totally see why Chris would be scared to ask you to the dance! 🙁

I know you said the dance is “boys ask girls,” but is that like an official rule? And even if it is, who cares? What if you asked Chris, the guy you’re crushing on? Then, if Justin asks you AGAIN, you can say, “I’m already going with somebody.” Or if you’re too nervous to ask Chris to go with you, at LEAST ask him to dance with you at the event. And DON’T dance with Justin since he was so rude and pushy!

Maybe you could also work on hanging out with Chris OUTSIDE of school, in situations where Justin isn’t there to bully him. Maybe by texting, Snapchatting or whatever you do. Or maybe you actually hang out in person. But either way, give yourselves a chance to get to know each other without the pressure of Justin’s interference.

I’m sorry you’re dealing with this, and I hope you and your crush figure out a way to crush on each other in peace, without Justin barging in where he’s not wanted.