I’M STUCK SITTING NEXT TO SOMEONE REALLY ANNOYING! 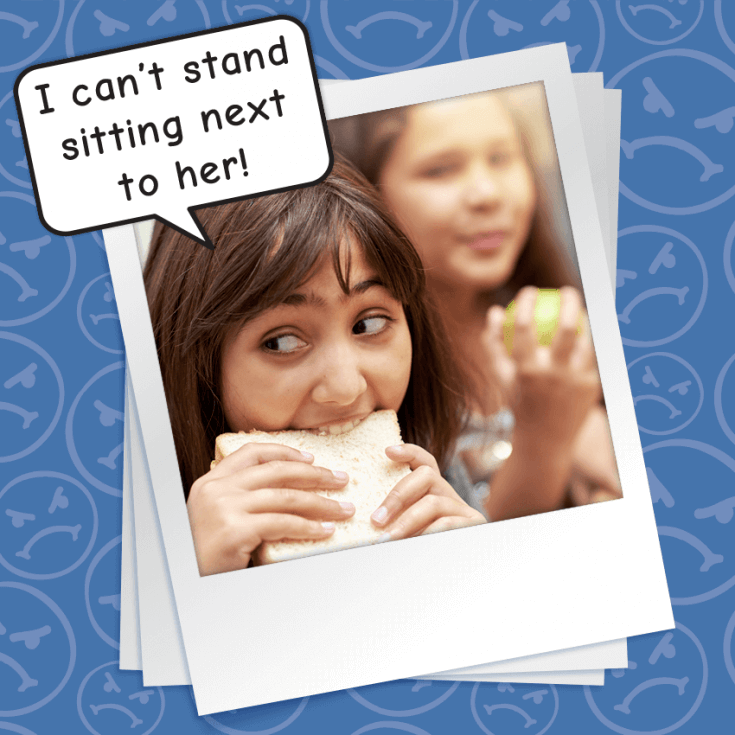 At my school, we have assigned seats during lunchtime and I’m forced to sit next to this girl who drives me NUTS! She’s loud, rude, and totally obnoxious. How do I make her stop so that I can eat in peace?!

Wow. Your school has assigned seating for LUNCH? I mean, I assume it MUST. Because otherwise I’d just tell you not to sit by her!

But since you HAVE to sit by her (which is a bummer), I think the main thing to address is this:

How do I make her stop so that I can eat in peace?!

Short answer: You can’t. I mean, the thing is you can’t ever force someone to change his or her behavior. You can only change YOUR reaction to it. She is who she is. But here are a few things that might help you deal with it:

If none of these things work and this is just a really impossible situation, you could consider talking to your teacher, lunchroom monitor or whoever’s in charge of the seating assignments. Talk to them about the steps you’ve taken, and ask if you can be moved. I mean, hopefully you won’t be told “no,” but be prepared just in case you are. In these situations, it seems like teachers usually tell us to work it out or learn to live with it. They think they’re preparing us for later in life when we have annoying co-workers, roommates or whatever.

But if they say yes, you should also be prepared to explain why you moved, especially since the girl you’re trying to move from might wonder what happened. You’ll probably hurt her feelings if you say, “I asked to be moved because you’re an annoying wacko!” So maybe have a kinder reason prepared, like “I just wanted somewhere different to sit.”

I hope these suggestions help!

Hey readers, how do YOU handle a super annoying person you’re forced to interact with?