I HAD AN AWESOME NEW YEAR’S! 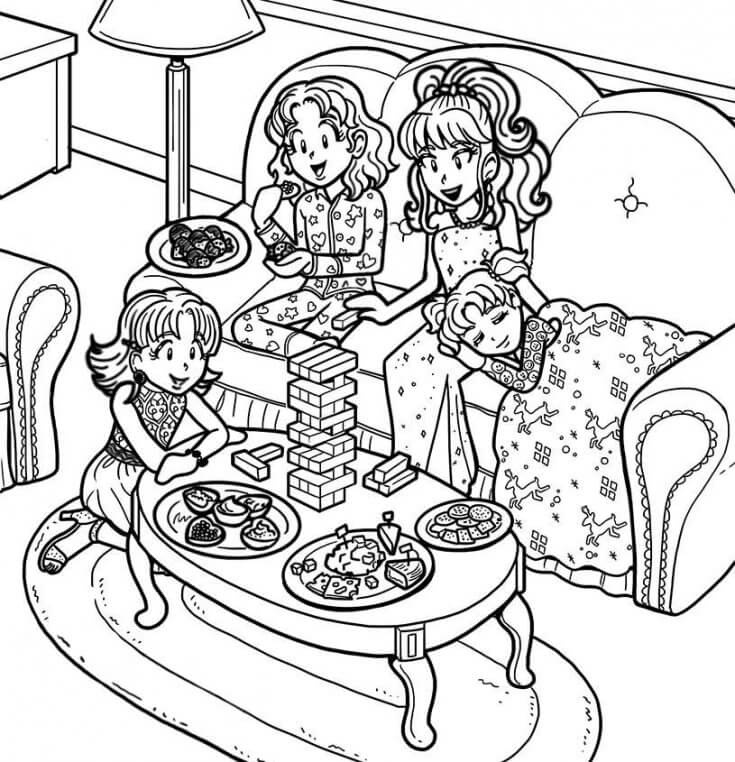 Okay. NO, I didn’t get to go to some big party in a penthouse of the fanciest hotel downtown, even though I WAS invited! (Thanks, Zoey’s dad, Mr. Bigshot record producer!)

But I still had a GREAT night! Squeee!!

So, one of the coupons said I would babysit Brianna so he could take Mom out for a date. And he cashed in for New Year’s Eve. I was still getting up the nerve to ask my parents if I could go to this swanky party with Chloe and Zoey. But then Dad cashed in his coupon and he was so excited about his plans with Mom, so I told Zoey I couldn’t make it to the party.

UGH, being a great daughter can sometimes be the WORST! ☹

But, I was gonna make the best of it! Brianna and I had plans for pizza, popcorn, movies, and board games. We were going to have a fun New Year’s Eve if it killed us!!

Okay, she is actually a six-year-old. But still! What kind of celebration was I going to have all alone?!!!

When I heard a knock at the door, I didn’t answer. I mean, who was going to be knocking on the door, unexpected, on New Year’s Eve? It was a little creepy. Then, whoever it was knocked AGAIN! I hid under the blanket on the couch.

(Look, I KNOW I’m fourteen and if I’m old enough to babysit, I shouldn’t get freaked out by someone knocking on the door, but this is my diary and I’m just being HONEST!!)

Then I screamed when I got a text alert. When my heart had stopped pounding, I saw it was a text from Zoey. I was happy she and Chloe were having fun, but I didn’t really want to see some fabulous selfie from their super-glam party. I almost didn’t open the text.

But who was I kidding – I’m always too curious to ignore a text. So I looked, and it said, OPEN THE DOOR, YOU GOOF BALL!!!

I didn’t know, but I was pretty sure a serial killer would NOT sound like Chloe and Zoey giggling. So, I cautiously peeked out of the door.

“SURPRISE!!!!” they shouted, and Chloe even threw in some jazz hands!

“What are you doing here?!” I exclaimed.

They were ALL dressed up and looked SO glamorous! Zoey was holding two plates of fancy food.

“The party was amazing,” Zoey said as they came inside, “for like five minutes. But it was all record industry people. Once we’d seen the penthouse and gotten some food…meh.”

“Where else would we rather be?” Chloe said. “Try the chocolate-dipped strawberries. They’re amazing!”

Of course, we made too much noise and woke Brianna. She was SO excited to see Chloe and Zoey. They convinced Brianna to try caviar and she actually LIKED IT!  OMG!! (I wouldn’t touch it. I mean, it’s fish eggs! I realize that it makes NO SENSE to be grossed out by fish eggs and eat chicken eggs without a problem, but I AM A WOMAN OF COMPLEXITY!!!)

We played Candyland with Brianna until she fell asleep in Chloe’s lap. Then we switched over to playing Jenga, Outburst Junior, and Would You Rather. We were so busy cracking up that we actually missed when the ball dropped on TV!

“Oh! We missed it! It’s the new year!” Chloe shout-whispered, Brianna still draped over her lap.

“Happy New Year!” Zoey raised her can of soda. I raised mine, then we all did a group hug.  I also hugged Brianna, but very gently so I wouldn’t wake her.

Who needs a swanky penthouse party when you’ve got friends like these?!! 🙂

What did you do for New Year’s? Did you go someplace awesome or just chillax at home?  Tell us in the comments!