MY SISTER AND I ALWAYS FIGHT! 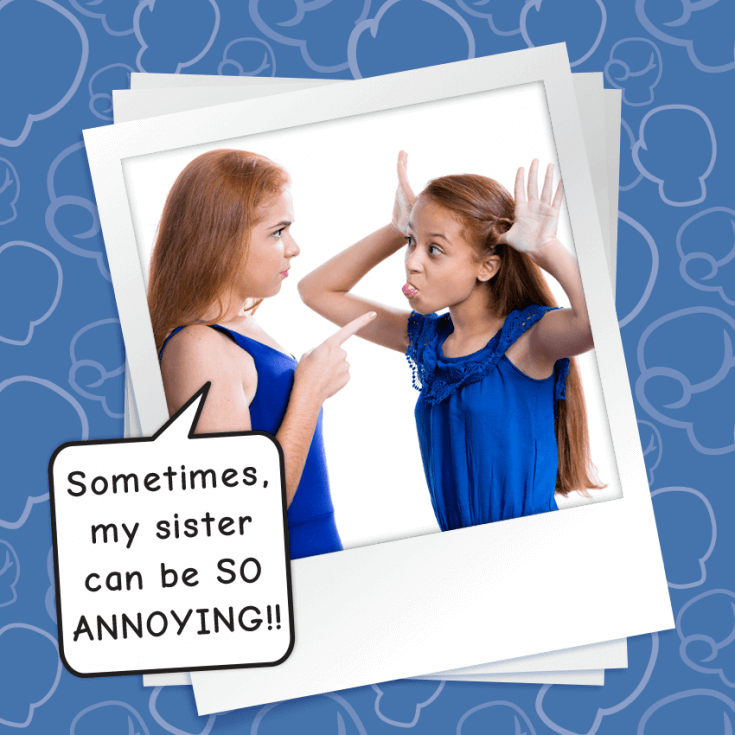 My sister and I used to fight over little things, but now it’s over almost EVERYTHING! I get SO mad at her that I yell things I don’t really mean to say, like “I hate you” or “I wish you weren’t my sister.” The worst part is that I’m the youngest sister, so she thinks she knows more than I do and bosses me around. That makes it even more IMPOSSIBLE to get along with her! Please help!!

This sounds really tough. I mean, I don’t have a sister. I don’t have any siblings. So at first I thought I couldn’t answer this. But then I thought maybe I can be a little more of an impartial observer. Like, I won’t bring my own drama with my siblings to this answer. Maybe that’s good? I don’t know. I’ll do my best, and hopefully others will give their opinions in the comments, too.

Based on stuff I’ve heard from friends, it’s normal for siblings not to get along sometimes, and it can get intense. It doesn’t mean you don’t love each other. I think sometimes we fight MORE intensely with family members than anyone else because we know, at the end of the day, family members will still be there, no matter how awful we act.

And as tweens/teens, our hormones are going crazy, right? And we learn in health class what that means physically, but I feel like we don’t talk enough about what that means emotionally. The way I understand it, all those crazy hormones make our emotions super extreme, and our brains don’t control our impulses as well as they will when we’re adults.

This is NOT an excuse to just be a jerk and blame it on your hormones. BUT it does explain why you both might go too far sometimes, even though you really love each other.

I think it would be good to talk to your sister some time when you guys are NOT upset. Tell her how much you love her and let her know that you don’t want to fight so much, and you know it’ll still happen, but that no matter what you say in the heat of an argument, you really love her.

Depending on what you guys argue about, these ideas might help:

I hope these ideas help. And maybe some of our other readers can give their thoughts in the comments. How do you guys handle constant arguments with siblings? Do you say things you don’t mean? How do you feel when your siblings say awful things to you?