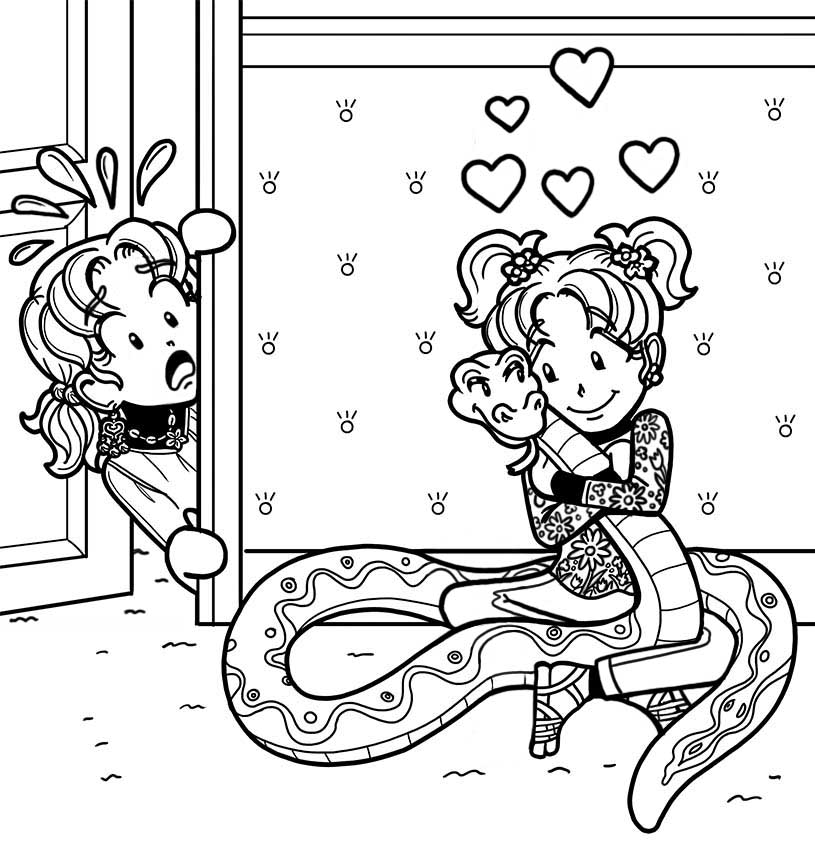 When Brianna asked if she could sign up to be in charge of her classroom pet for a weekend, I think my parents were expecting a fish or a small rodent. Maybe a bird?

NOT A FIVE-FOOT LONG PYTHON!!

Apparently, Monty Python doesn’t usually go home with students, especially since his giant aquarium is hard to move and he doesn’t need that much care. But the school was going to be fumigated over the weekend AND Brianna’s teacher couldn’t take Monty home with her. She said something about living in a strictly no-pets apartment building. (Or maybe that’s what she SAID because she’s a rational person who doesn’t want a PYTHON where she SLEEPS!!)

My mom had to call Dad to come to the school and pick up the snake since Monty’s aquarium wasn’t going to fit in her car. When they got home, I had to help them wrestle the aquarium into the house.

“Where are we going to put it?” my mom complained. Brianna’s dresser wasn’t big enough. And I definitely didn’t want that giant WORM in my room!

“On the kitchen counter?” my dad replied. Then he ducked the death-rays coming out of my mom’s eyes.

“How about the coffee table?”

“But I’m having my book club over tomorrow!” She wailed.

“How about the bath tub?” Brianna suggested.

That was actually a decent idea. I wasn’t too thrilled about having to use my parents’ shower for a couple days. But that was better than having a giant snake in the kitchen!

Right after dinner, Brianna got ready for bed. “I’m sleeeeepy,” she said, doing this totally fake stretch-and-yawn. Then she went to bed—or so we thought!

A few hours later when I went to brush my teeth, I tripped over something lumpy on the floor and SCREAMED! I’m not gonna lie, I thought Monty had escaped the tub. But NO, Brianna had set up a nest of blankets on the bathroom floor, right next to the tub. She didn’t want Monty to be LONELY. (Never mind that Monty spends most nights alone in an empty school, but okay.)

I finally convinced her that we had to sleep in our own BEDS. But the rest of the night I had the grossest, skin-crawly feeling that a giant snake was about to slither under my blankets!

I don’t think my mom slept well either. The next morning, she was more stressed out than usual as she ran around tidying up for her book club.

“Whatever you do,” she said, “do NOT mention the snake to Mrs. Wallabanger!”

I’m not even sure who she was talking to!! Herself, maybe? It wasn’t like Brianna or I were going to attend Book Club!

“Why not?” Brianna asked, looking offended.

“She’s very afraid of snakes, Brianna,” Mom said. “And we don’t want to make her feel uncomfortable in our home.”

But it was okay for the REST of us to feel uncomfortable in our home?! That was reassuring!! ☹

Before the ladies arrived, my mom slapped an “Out of Order” sign on the door to our bathroom.
“Is that really necessary?” my dad asked.

My mom froze in the middle of arranging pastries on a tray. “Do you REMEMBER what happened the last time I hosted Book Club?”

We ALL remembered. It’s a looooong story. Let’s just say it involved Brianna, the neighbor’s cat, a bubble bath, and a very expensive handbag that was never the same again. It’s been about a year since Mom hosted Book Club.

When the doorbell rang, Mom turned to us and whispered all serious-like, “There is NO snake in this house, UNDERSTAND?” Even Brianna looked like she understood.

Which is why I was shocked when I heard the SCREAM an hour later.

I raced out of my room and ran smack into Mrs. Wallabanger. She was screaming her head off.

“Mrs. Wallabanger!” I stammered as Mom skidded into the hallway.

Mrs. Wallabanger nearly ran me over as she dashed by, dove into MY room, and slammed the door! And then she locked it!

Then the doorway out to the living room was filled with women screaming. But only for a second before they scattered away from the hall.

With all the screaming, it took me a second to notice the GIANT BEAST slithering its way down the hall! Toward me!!

Then I was screaming!!!
Suddenly there was a loud whistle. We all turned to see Brianna in the bathroom doorway. I didn’t even know she could whistle! “You guys are scaring Monty!” she scolded.

Then she marched down the hallway, scooped the snake up, and hauled it back to the bathroom. “Poor Monty,” she cooed. “These horrible people are TRUAMATIZING you!”

From outside, we could hear the screeching tires of cars quickly leaving our house.

Mom was in shock. Dad reinforced Monty’s aquarium with about three rolls of duct tape. And, I completely forgot Mrs. Wallabanger was in my room until I tried to go back in there and the door was locked!
It took me forever to convince her that the snake was back in its cage. “No more Book Club for me,” she muttered, as I walked her to her car. “No more books! No more clubs! Staying home is nice!”

Staying home is only nice if you DON’T have a python for a guest! I’m going to Zoey’s tonight and I’m not coming home until Monty is back where he belongs!!

Is there anything that you’re really afraid of and why? Leave your answers in the comments!