MY CRUSH IS NOW MY LAB PARTNER!!! 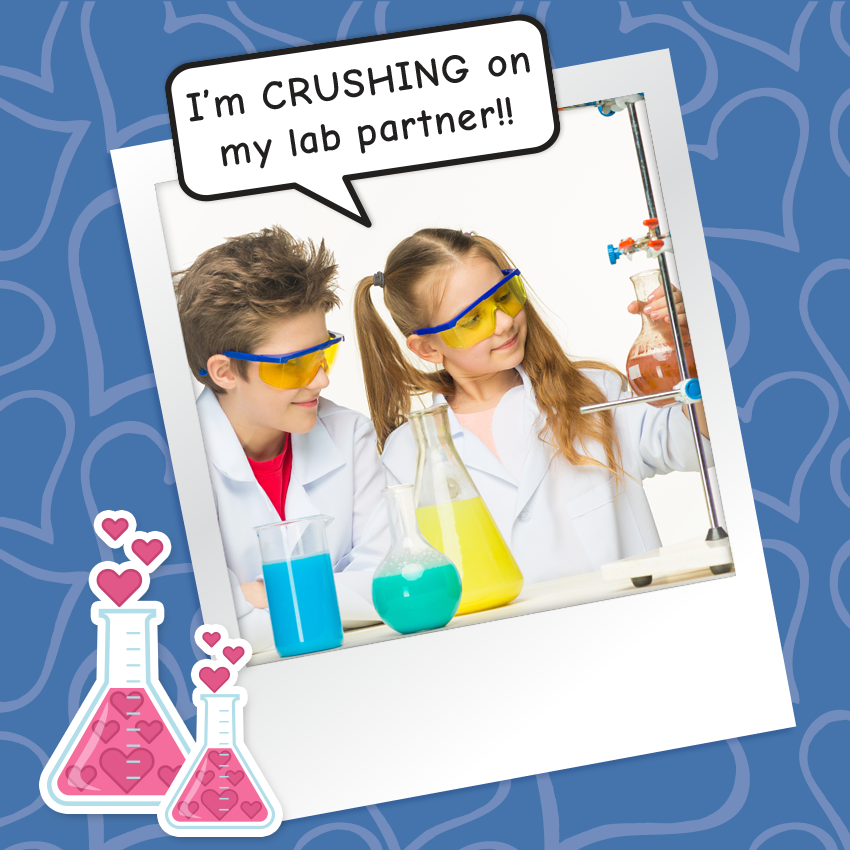 Hi Brandon! So, I’ve had this crush FOREVER. Yesterday in science, we had to move seats and now he’s MY LAB PARTNER!!! The good part is that he’s super funny, cute, kind, and a very great person to talk to. But, the bad part is that if I do something dumb, I’m afraid he’ll totally think I’m a loser. And since I’m horrible at science, it’s twice as worse! What should I do? Please tell me!!

Well first of all, it’s AWESOME that you get to be lab partners with your crush in science. Now you’ll have a reason to look forward to this class. (It sounds like it was NOT a favorite class before.) And besides that, you’ll have a built-in reason to talk to him every day. (Or however often science meets.) SOME people have to make up fake reasons to drop by their crush’s locker (not that I’d know anything about THAT). But, you just have to show up for a class you’d go to anyway. I believe my friend Nikki would say, “SQUEEEEEE!!”

But you’re stressed because…you’re worried he’ll think you’re dumb? He won’t be nice anymore if he sees you’re not an A+ student? I mean, that doesn’t really sound like the kind of guy you’ve described.

Look, let me flip things around on you. If HE screws something up in an experiment or gets a terrible grade on a lab, are you going to like him any less? Are you suddenly going to think he’s a total “loser?”

I’m guessing no? And if he’s as kind as you say he is, he’s not going to judge you if science isn’t your best subject. I promise.

Look, everyone has their strengths and weaknesses. So you don’t feel confident in science. But maybe you’re great in English, history, or math. Maybe you’re the fastest runner in the school, or the best artist. Maybe you’re an amazing friend. Or maybe you’re still figuring out your strengths. But you have them.

And remember, your crush is not perfect (even if it seems like it). Maybe he’s great in school but a total klutz at sports, or a terrible dancer, or he forgets his mom’s birthday. Maybe he seems super smart, but he freezes up on tests.

So, when you’re stressing that he’s going to judge you for being imperfect, just envision him dancing HORRIBLY. Or, just remember that nobody’s perfect and this is a nice guy. And then be grateful that you get to sit next to him.  In fact…if he’s really good at science, maybe it’ll be an excuse to spend even MORE time with him! Because if you’re struggling, you could always get together to study.

I’m NOT suggesting you pretend not to understand something just to spend time with him. Playing dumb is NOT a cool way to get a guy’s attention. But if you need help, and he’s good at science…that sounds like a perfect fit.

So, try not to stress so much. This definitely sounds like a reason to celebrate. Science will be fun now. You’ll get to talk to your crush! And, maybe your grade will even improve.

Readers, how do you deal when you’re stressed about impressing a crush? Do you worry about not being smart enough/athletic enough/funny enough/whatever enough? How do you overcome that?