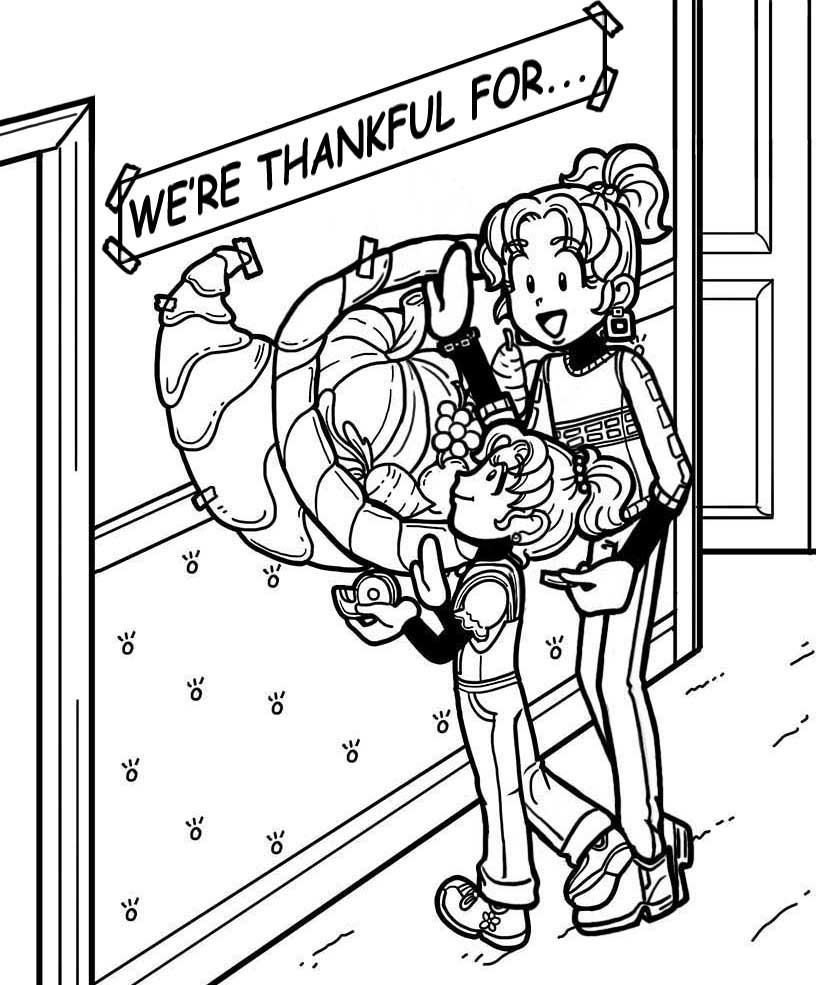 I woke up this morning and my mom had taken down the Halloween decorations. The pumpkins were all moldy and gross, so THANK GOODNESS! But the spider webs on the bushes, ghost decals on the windows, witch in the tree and the gravestones on the lawn were ALL GONE.

And I mean, Halloween’s over. I get it.

But it all just looked so…sad. And naked.

It’s weird, because it’s just how it all looked for months before Halloween. But I got used to those spider webs and gravestones!

“Nikki, honey. Halloween is over now,” my mom said when she saw my face at breakfast. “I’m not going to be the house that has Halloween decorations up until December.”

That was it! Christmas decorations would make things festive again!

“What about being the first house to put up Christmas decorations?”

“Absolutely not.” My mom gave me The Look. She has a real thing about anything to do with Christmas before December.

“November is for THANKSGIVING!!!” Brianna sang from under the kitchen table. Where I didn’t know she was camped out, so I jumped and banged my knee on the table.

“Yes. You may decorate for Thanksgiving,” my mom said. Then she left to go grocery shopping.

Like, okay, I remember making those turkey handprints when I was Brianna’s age, but it just seems WRONG to decorate with turkeys. We’re going to EAT them. Why would we put up artwork of cute, smiling, supposedly ALIVE turkeys, to celebrate the day they get roasted for six hours in the oven???

So, now what? Just Fall leaves and pumpkins again? It’s like…the boring version of Halloween decorations!!! But it was either that or a naked house.

“Okay, Brianna,” I said. “It’s decorative gourd time!”  Our pumpkins had gone moldy. But I knew there were some spaghetti squash and acorn squash in the pantry. I pulled them out.

Brianna scrunched up her nose. “Are you making lunch?”

“No! I’m making…Thanksgiving! Next, we need leaves. Pretty ones. All different colors. Wanna help?”

So, we went out into the yard together to gathered a bunch of leaves. And, I made three rules:

Finally, we had a nice bunch of leaves, which we took inside.

It didn’t take long to spread the leaves down the center of our dining room table and arrange the squash on top. I found a few white candles in the Christmas decorations and included those, too.

But…it was just the table.

Then Brianna said, “We need an ice cream cone!”

“We don’t have any ice cream cones,” I said. “I don’t think we have ice cream, either.”

“No, for our decorations! We need the ice cream cone with the fruit!”

I don’t know what kind of weird Thanksgiving Brianna got stuck in her brain, but we have never once had ice cream cones filled with fruit.

“YOU KNOW, Nikki!” Brianna was getting frustrated. “The ice cream cone that’s falling over with the fruit spilling out!”

It still took me a second, and then I finally realized what she meant. “A cornucopia!”

Now THAT was a good Thanksgiving image that didn’t involve animals we were about to eat!!

I spent WAY too much time searching Pinterest for how to make a cornucopia, but they were all either fancy bread sculptures, or they were just showing you how to arrange the fruit inside a fancy cornucopia-shaped basket. WHICH WE DID NOT HAVE!

While I was looking, Brianna distracted herself by drawing pictures of cornucopias.

Just as I was about to admit defeat, I realized Brianna had the right idea!

“We’ll draw it!” I said. I fetched the giant roll of butcher paper from the garage and cut off a nice big piece. I sent Brianna to find construction paper, brown paint, and scissors while I was outlining a giant cornucopia.

Once it was drawn, I set it up on the kitchen floor.

“Your job,” I told Brianna, “is to paint the cornucopia brown. I’m going to make the fruit.”

While Brianna painted, I cut out fruit shapes from the different colors of construction paper. While the paint dried, she helped me make more fruit.

Finally, we were done. I was just taping the giant cornucopia up in the hallway as my mom walked in.
She frowned. “You know I don’t love having stuff taped to the walls,” she said.

“We can take it down. But here’s my plan.” I showed her the fruit. “Every day we each write down something we’re thankful for, and stick it on the cornucopia. By Thanksgiving, it will be full!”

My mom got all teary-eyed. She grabbed a paper apple and the pen in Brianna’s hand. She wrote something on it and stuck it on the cornucopia.   It said, “MY GIRLS!”

How will YOU be decorating your home for Thanksgiving? I’d love to hear your cool ideas in the comments!